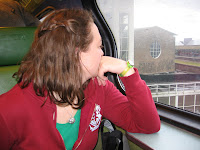 Hello everybody,
We finally made it to Berlin! We took the cheap train, so our trip was super long, nine hours to be exact! We ended up sleeping in the train station in Munich last night, because we weren't sure when we we're going to leave for Berlin. We ended up leaving at five in the morning! We had to change trains five times throughout the day too! We did go through Nurnburg, Leipzig, and Wittenburg, where Martin Luther nailed his 95 theses to start the reformation!

Now we are finally here & heading to our hostel for a looooonnnng shower. talk to you all soon. ian & ebe
Posted by Unknown at 16:43 2 comments: Links to this post 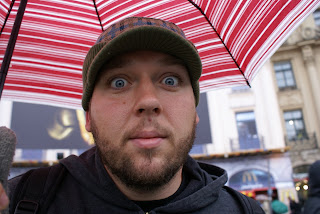 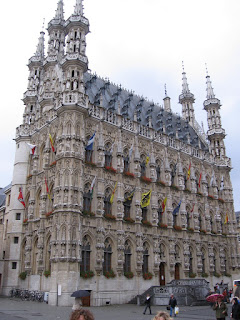 Well, well, well... finally we are able to update the blog for all our die hard fans back home (ha!). It's been one week now since we've been in Europe, and I've already visited more countries than I had in my 24 years back home!

Amsterdam was our first stop of our whirlwind tour. The city really does live up to all the hype. The buildings were amazing, the people great, and the red light district titilating. Pun intended.

We made our way down to Venlo where we stayed with Matt's sister Leann for three days. She was very hospitable and showed us a great time. Without her, we wouldn't have gotten such a great feel of true dutch life. We went to an Open Air Museum which chronicled Dutch life from long ago to the present. On our way there though, we visited the site where the Battle of Overloon was fought. There was an amazing museum there dedicated to the war, with tanks and all the trimmings. Truly what I always wanted to see. We also saw some breweries and distilleries, all of which we toured.

On Monday Leann took us to Belgium where we visited a beautiful town named Louven. It has one of the oldest universities in Europe, which explains the young populace. After our stay with Leann, we said good bye to comfy Dutch living, and headed east for Koeln. Immediatly walking out of the central train station, you see the magnificent Cathedral, which is one of the biggest in Europe. It's amazing to think it was built without all the useful tools that today brings, and that it lasted through the bombings which destroyed 90% of Koeln during the war!

Next was Munich, and what else is there to say besides PROST! We luckily found a hostel named the Tent... and it truly was a tent. It is a huge tent with bunk beds and more than 250 people can stay there! Luckily we got a bed, because there's another tent next door where they give you a pad and some blankets and you just sleep on the floor... shitty!!! Munich is a very pretty city, but the rain has put a bit of a damper (haha) on things. Luckily when we visited the Wiesn, where Oktoberfest takes place, the rain stopped, and the beer began to flow. We got there early, around 10, and had our first beer at the Lowenbrau tent. Out front of the tent stood a huge lion that drinks a beer and then yells "Looooooooooooooooooowenbrau!" Pretty cool.

After that we went to a beautiful tent built by Hacker Phschorr. Their catch phrase is "Himmel der Bayern," or heaven of Bavaria. Inside the ceiling was decorated with blue sky and puffy white clouds. Immediatly when we walked in there was music, smoke all over, and drunk people from around the world yelling Prost! We sat next some Austrians, GErmans, and a lone Aussi who had been drinking all morning. He didn't realize how strong the beers were until we told him of their high alcohol content, but he had allready drank 3 or 4. Oktoberfest was great and quite an experience. Who would have thought that the one of us to get thrown out was not me, but Ebe! I'll let her take over from here....

I was innocently heading to the bathroom when a wave of people pushed by me and swept me away. Before I realized it I had passed the threshold to the outside and the bouncer reached behind the little group of people pushed out and shoved us to the back of the line to get in. By this time it was getting really late and only people with reserved spots were getting in. I tried to explain but he would only listen for so long as i stumbled along in German. Luckily, Ian eventually came out of the tent to find me and we were reunited. At the time it was horrible, but Ian is right that it will make a great story. It is almost funny now.

A couple things ian did not mention/ in Amsterdam we stayed with a great couchsurfer also named ian, spelled Yon. He let us stay in his home and offered great discussion. We also made some friends in a bar in Amsterdam, a life long Amsterdamer named Richard who was quite drunk and constantly trying to flatter his very pregnant girlfriend who was also our bartender, and a nice Brazilian kid who had moved to Amsterdam a few years before. We got a great picture of them which we promise to post, along with a bunch of others soon. In koeln we stayed in Station hostel, a great funky place. And now Munich has completed the experience. Tonight we leave for Berlin, our final stop. Wish us luck, we will be in better contact with you all, and happy travels to you as well.
Posted by Unknown at 15:53 3 comments: Links to this post 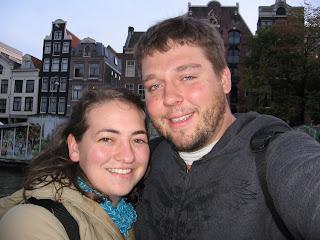 Jan und Juli in the Netherlands! More to come...
Posted by Unknown at 22:54 2 comments: Links to this post 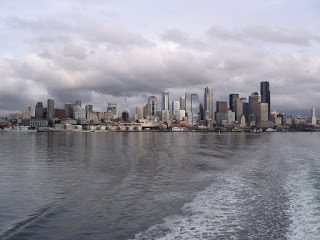 In less then a week we are on the airplane heading to Amsterdam. We're so excited- and so nervous. To leave everything we know and love behind is terrifying! W e are heading for an unknown post in a city with which we have no familiarity. We are trading the Space Needle for the TV tower, the ferries for the U-Bahn, our work as servers to probably work as dishwashers, and our friends and families for strangers.
With that said, I know this is going to be an experience of a lifetime. When I was a little girl I told my parents I was going to live in Europe. They were bemused with my stubborn assertions, but since then my plans have never varied. This is fulfilling my ultimate dream and I am incredibly thankful I have someone as amazing as Ian to share the adventure with. I want to thank everyone for their contribution to our lives. I never imagined it would be quite this hard to leave and that's thanks to all the wonderful people we have gotten to know. So thanks...

Our next post will be after we've made a 91/2 flight, met Yon (a friendly Amsterdam resident that is willing to put us up for 2 nights), and started to fulfill our far- flung dreams. I urge all of you to travel and expand your cultural and societal boundaries.

"Travel, like the world, is a series of hills and valleys. If something's not to your liking, change your liking. Travel is addicting. It can make you a happier American, as well as a citizen of the world. Our Earth is home to nearly six billion equally important people. It's humbling to travel and find that people don't envy Americans. They like us, but with all due respect, they wouldn't trade passports."
Like usual, the debonair Rick Steves said it best
Posted by Unknown at 20:16 1 comment: Links to this post

Been sitting at the local "Espresso World" here in Kennewick, and I realized that I need to post something on our blog! So here goes... Been a nice last couple of days here, the sun has been shining, as well as the sweat on my brow, but it sure does beat the overcast clouds that had been haunting us in Seattle before we left.

It's been really nice catching up with my mom and dad the last week, and I would recommend it for anyway planning on going away for an extended period of time. I don't understand some people that only go home for a day before they leave. I feel like I owe it to them and myself before setting off on a trek half-way across the world... plus, it's been really nice being taken care of like in the good ol' days. Mom, dad, give me money for the movies!

As the date grows nearer, just under a week-and-a-half now, the excitement is growing more and more. I have also probably done more research in the last week about our travels, than I have the past six months! It's really exciting looking at all the cool sites that I'll soon be at. It's gonna be quite a chore too, trying to figure out which things to see, and which things to leave behind. Do we visit the Heineken Brewery, or do we not??? A question haunting me and keeping me awake until the early morning... (amongst many others) But I think when all is said and done, beer will most definitely win out.
Posted by Unknown at 04:07 No comments: Links to this post