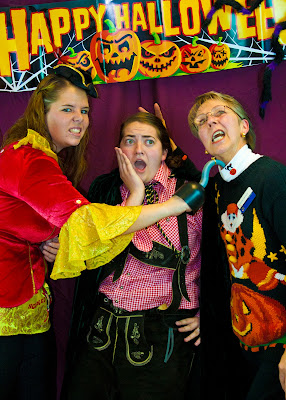 These hard boiled eggs are split in half and topped with a whipped yolk topping like a traditional deviled egg, but they are spooked up by creating a bloodshot appearance to the egg and making the yolk spicy with a jalapeno or olive for the pupil. Tada! Bloodshot eyes appetizer. They are a tasty party treat with a little bit of eww. Ideal for Halloween.

Hard boil eggs for about 9 min.

Well, we just got back from our awesome road trip down to California to celebrate our anniversary as well as see family and friends before the big move to Berlin. 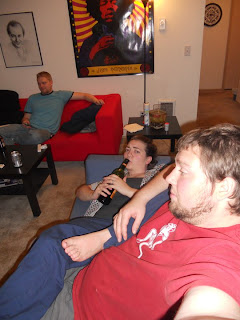 What made the trip really special was seeing so many people we don't get the chance to see often enough.  So in the spirit of upcoming Thanksgiving, we give thanks to those of you who made this trip so special (in order of appearance):

Sullivan: Thanks for letting us crash on the couch and the exciting evening at the Irish dive bar.  Watching those old drunk guys argue really kicked off the trip on the right note. 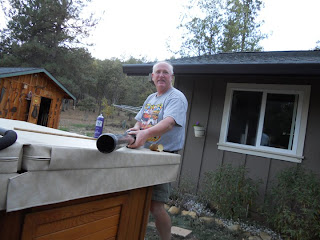 Aunt Sue and Uncle Dave: We had such a good time seeing your lovely home and spending time with you.  We really regret not having done this sooner.  You really have such a beautiful home, and I really enjoyed just spending time with you both chatting and shooting potatoes into space.  Those dirty spuds had it coming!


Hoagie: Hollywood man.  That's all I really have to say.  Was great catching up and hearing about your time in LA.  I'm sure there will be plenty of people to sue once you're done with law school.  You better celebrate with a trip out to Berlin to see us.  Keep on rockin and enjoying those $3 beers. 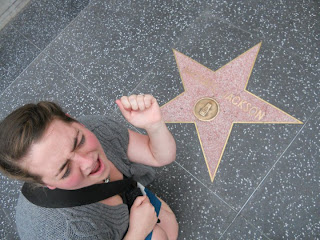 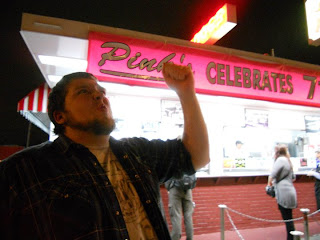 Ron and Connie: You both treated us too well and we're jealous of the perfect weather you have.  Even when it's "rainy" it's beautiful.  The cooking class was so much fun, and we're gonna be putting our skills to the test this Thanksgiving.  I personally enjoyed getting to know you both better, and I look forward to playing Cribbage with you again, Ron... hopefully next time in Germany!

Emily & Klaw: I'm so glad you suggested we should stop by.  It's been way too damn long.  We always have such a good time when we get together, and I'm happy we were able to do so before taking off.  Once you get some vacay, make sure to hit up Berlin after Amsterdam.... :)

Once again, thanks to you all, and we would really like to return the favor in Germany (unfortunately not as comfortably as you all had us, but we'll try!).

Preparing to return to Berlin, we took one last hurrah before trading the car for the UBahn. A road trip from Seattle to Southern California took us to see a friend in Vancouver, WA, my aunt, uncle & a potato gun in Northern California, LA TV madness, and family and a Zoo in San Diego.

We stayed with my Aunt & Uncle outside of Yreka on the weekend, visiting the Etna brewery, old wild West grave sites, and some other spooky sites. My Uncle Dave also treated us to the potato cannon. Yes, that's right, CANNON. We each got to shoot it. Cannon make big BOOM! 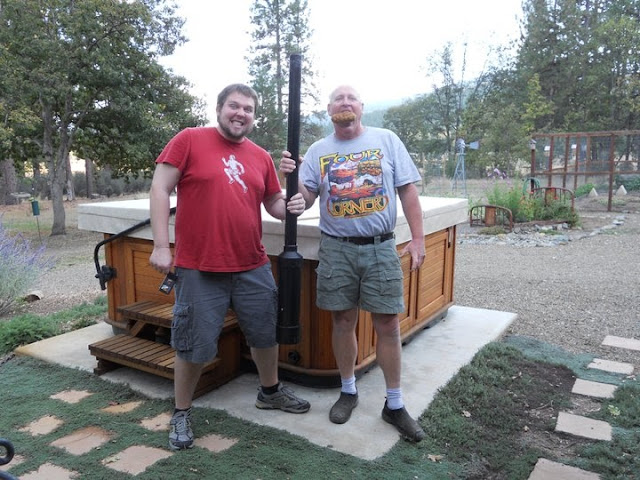 PLUS Dave is a master pizza tosser. Yes, Aunt Sue is a lucky women & Ian is already working on his pizza skills.


We left them on Sunday to make our way to LA. We marked the momentous occasion of our 1st wedding anniversary with a meal at In-N-Out. It was only appropriate for us. 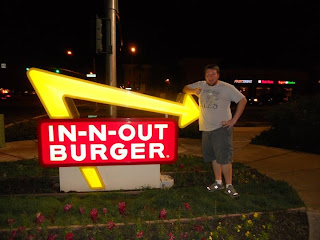 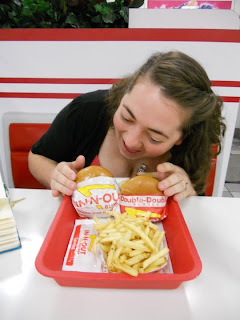 Stopping in Los Banos for the night, we were in LA by 1:30pm and barely made the taping we planned to go to of Chelsea Lately. The line consisted of douchebaggery like no other - we were really in LA. Overheard cell phone talk consisted of chatter about cleanses, agents and designer brands. UGH.

We had to white knuckle it as they moved some people to the back of the line and we were literally the last two guests allowed in. Whew! But finally we were in watching the filthy sausage of TV being made. Laughing on cue was bizarre, but we didn't have to fake it for long. Ross (the intern), Lonnie Love... comedy pros at work. So cool to be behind the scenes and see some seriously funny people. We also saw Johnny Knoxville do this:


How to reserve tickets to see taping of Chelsea Lately: http://on-camera-audiences.com/shows/Chelsea_Lately

We stayed the night with one of Ian's SAE who had made the transition to law school in LA and had truly transformed from the last time we saw him in Berlin.  Underneath the LA-ness -he was still a supremely nice guy. And his location in Hollywood, right next to Michael Jackson's star on the walk of fame was pretty great.

Plus- we got to have a bite at Pink's, a family owned hot dog stand that has been in operation since the 1930's. 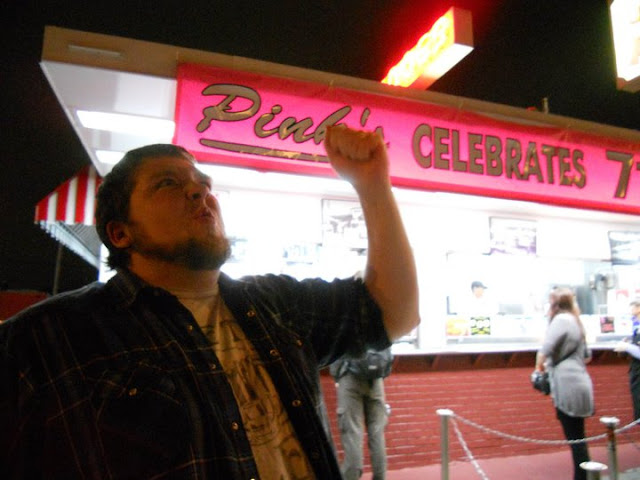 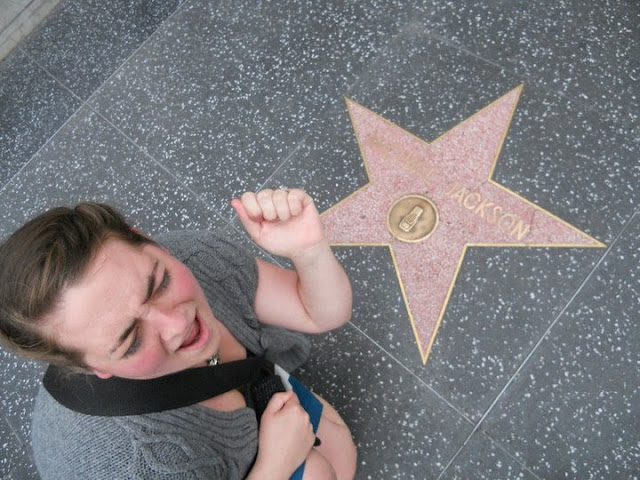 We had to get up way too early to make the next taping we wanted to see - the Price is Right! We did not make it. Just barely missed the cut off for the first show and decided to get some breakfast and try again.


At 12:15 we were back on the CBS lot, filled out paperwork, got our name tags and were waiting, waiting, waiting... wondering if we were even go to make it this time (even though they promised we would get on) as Dr. Phil's entire audience was suddenly given spots (as if I didn't dislike that dude enough).

Suddenly - we were definitely getting in and it was time to hustle for the quick producer screening before we headed in. We had neon t-shirts from our wedding and were prepared to be enthusiastic nutcases.  I thought we had a chance as we seemed to catch their eyes in the mini-interviews and Ian got a laugh, but there was no telling what was going to happen. Standing in line for so long, there starts to be a certain sense of camaraderie and all of our new friends & us were just happy to be going inside.

...and then we were on set! Bright, chaotic and cheesy- it was hard to figure out where to look. Drew Carrey was pulling off the Bob Barker hosting spot and we were laughing, cheering, yelling with abandon. Sadly located on the very far sid we never did see ourselves on TV and were not selected to spin the big wheel or even guess the price of a necklace - but who cares! We were there and it was kinds of zany madness. Unlike Chelsea - there was nothing forced here.

The person who won the entire show? She bet $4 on her first bid. A bright bulb that one. They must have been scared we would be too good and take all that cash money. Yeah, that's it. Show aired December 8th and of course we watched it - scanning the crowd for our faces in vain. Whatever - we actually had an amazing time.

No cameras are allowed at tapings (thus we have no pics). Make sure if you go to look at the details and conditions as there are many things that can get you booted.


(Deadspin has a great piece for how to get on How My Foolproof Scientific System Got Us Onto The Price Is Right- shortcut: Lots of Screaming Enthusiasm )


I am typing this from Anaheim as we drove down this evening (after one last LA legendary meal at Roscoe's Chicken & Waffles). Shortly after checking in, there was the sound of explosions and I thought California was finally breaking off the mainland. Ian's days as a Disney addict prepared him better & he dragged me outside to watch the most amazing fireworks I have ever seen! Seriously- these were incredible. They appeared 3D expanding toward us and supersonic sound waves blasted my ear drums- in a good way.

We went to downtown Disney even though it was late and wandered around the magic, frolicking in the corporate charm. I hadn't realized till very recently Disneyland would be dressed for Halloween and it was looking PG spooky. Cannot wait to get in those gates tomorrow. 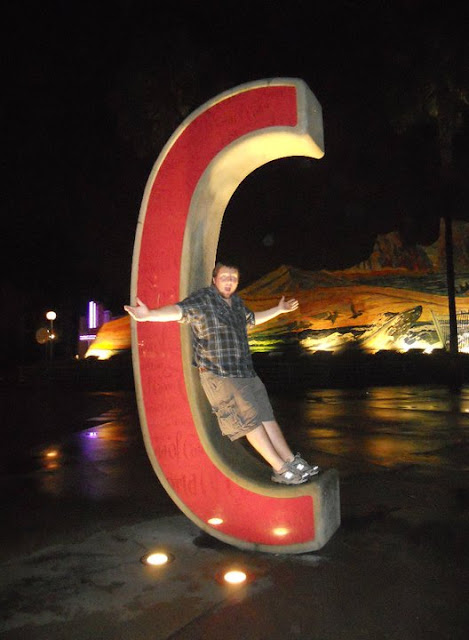 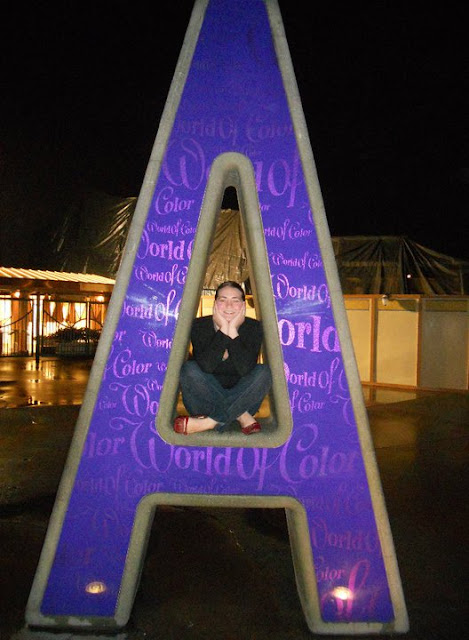 Disneyland in all of it's Halloween finest. Amusement parks are the closest thing for me to feel like a kid again. 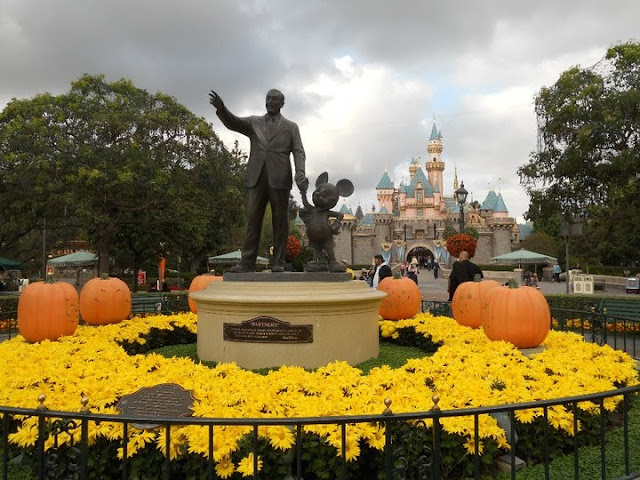 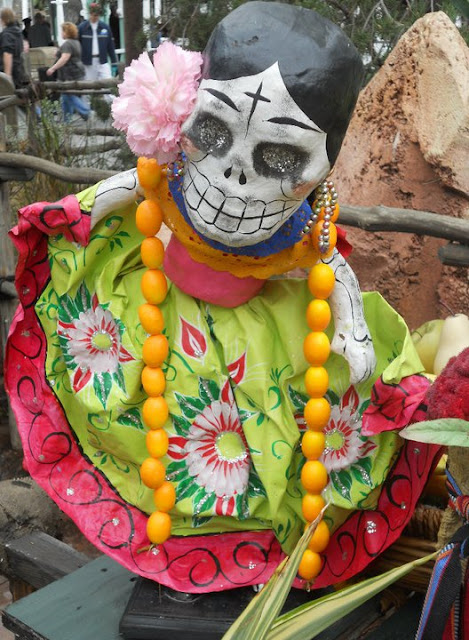 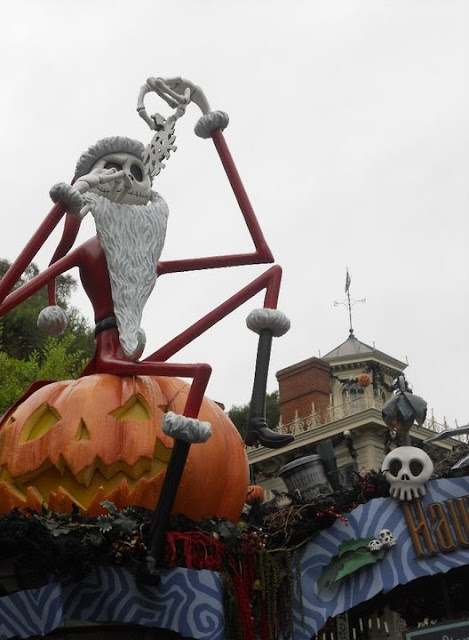 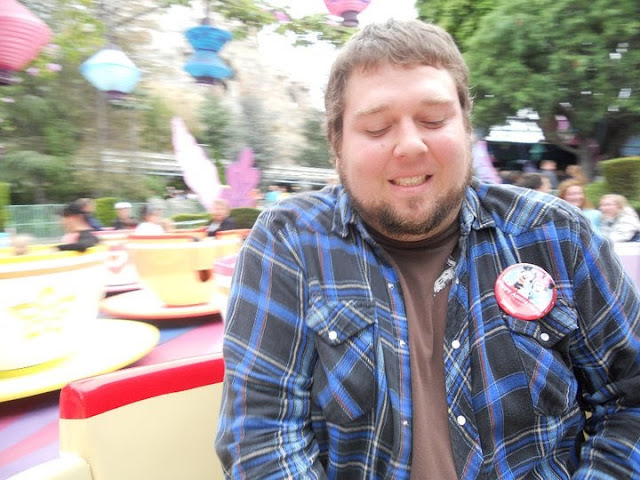 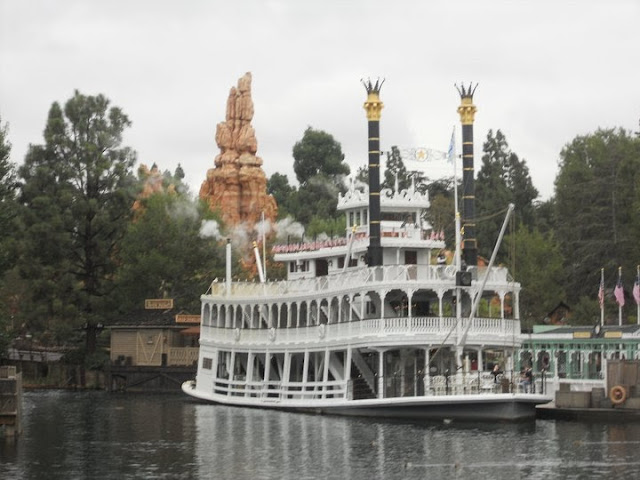 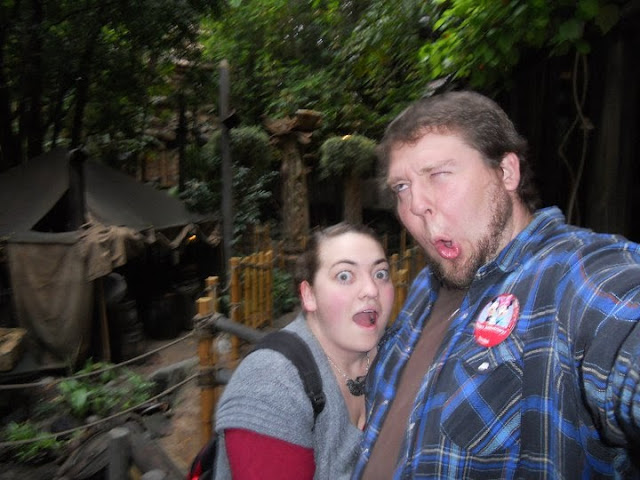 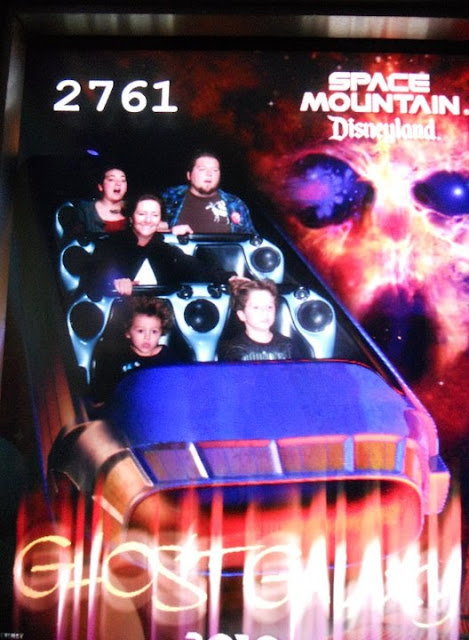 After years lying dormant, my wanderlust for theme parks was re-ignited by Disneyland. In the next 3 years, we visited 3 more parks.

Happy Anniversary to US

One year ago today I was running around with my ladies taking pictures around Seattle and quietly freaking out.
Today Ian & I are visiting my aunt & uncle in Etna,CA enjoying homemade pizza, awesome potato gun, and sharing a glass of champagne.
I couldn't be happier. 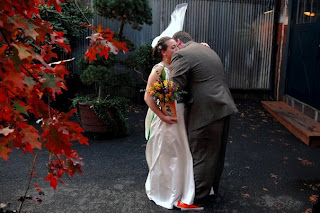 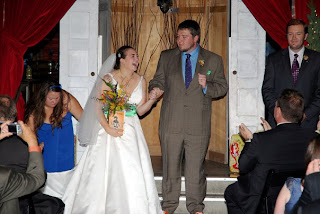 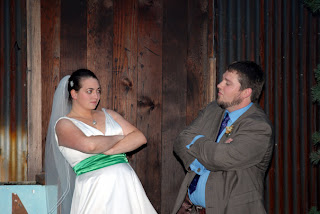 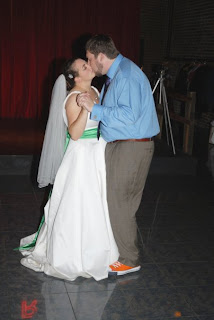 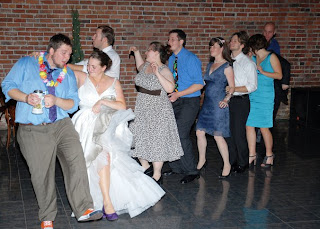 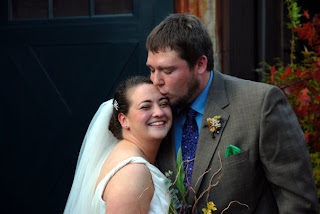 Plans for the road trip are finally becoming a bit more defined (about time on our part- less than a week away!) 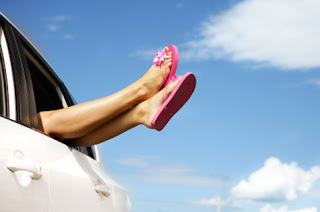 Friday- leave work & crash with a friend in Vancouver, WA
Saturday- Scoot down to Etna, CA for some quality time with my aunt & uncle
Sunday- ANNIVERSARY! Enjoy more time with a & u then book it down south
Monday- head to LA for a taping of the Chelsea Lately. Spend the night with a fraternity buddy in Hollywood
Tuesday- one more day in LA & time to make The Price is Right! in some wedding t-shirts. drive to Anaheim
Wednesday - Disneyland! another night in Anaheim
Thursday- Carlsbad/San Diego to enjoy some more fabulous fam & hopefully the Zoo
Friday- more time with family & a cooking class. Thanks Connie & Ron!
Saturday & Sunday- Epic Drive home

Time for greatness to ensue....
Posted by Unknown at 17:40 No comments:

Moving abroad is reaching the terrifying point as we are now homeless, items are scattered throughout my parents house, and we have numerous events looming. Surprise Birthday, Sounders, Wing Dome, Road trip to CA, First Thursday, Halloween, dentist,  on top of finishing packing for the trip and getting visa documents in order. Shnike there is a lot to do.
Luckily, actual fear doesn't usually come into play. As Americans, we often disregard the general dangers that besiege us everyday. Driving a car, high crime, and the Northwest's charming infestation of serial killers. We gladly trade those real threats for the safety of Europe.
Parents fears of us being in such a big city were quickly dismissed upon landing in Berlin. Besides the generally harmless street punks, Berlin is an extremely safe city and it feels like it. Until....

say what? Apparently there is something to be worried about in Europe right now. Though not targeted at Americans, and not just in Berlin, the current threat is a tad intimidating. "The travel alert is one level lower than a travel warning..." Here's hoping for a little more kumbaya in the future.

For more on the madness: