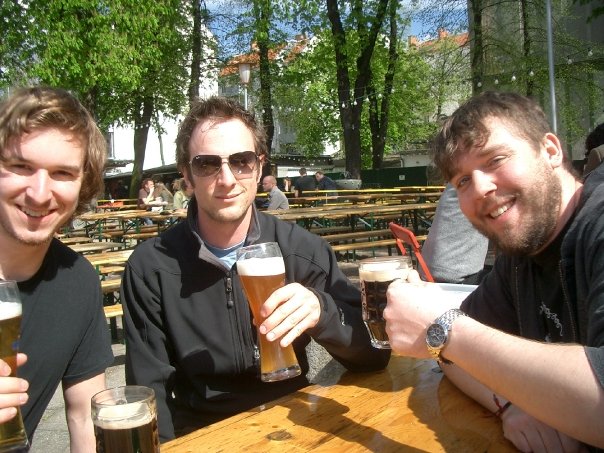 Over the weekend we had more visitors to see us while we were in Berlin. This time it was a couple of brothers of mine from good ol' SAE Fraternity. We were expecting them both on Saturday from their respective cities of study, Dublin and Prague, but Hogie got the dates mixed up and showed up a day early on Friday! No worries, because the weather was great and we enjoyed one anther's company outside on the sidewalks of different cafes and bars... which would turn out to be a recurring theme throughout the weekend. After a night of fun and a random house party, we had to get up early (a little too early for all of our tastes) and pick up our second visitor from the airport.

If Friday wasn't the most beautiful day we had yet, Saturday blew it out of the water. We took them on a little tour of Berlin, stopping at beer gardens and parks along the way. Lucky for us, our friend Jeff was having a huge shin-dig at his apartment that night. The party was raging and there was barely room to enjoy your beer, but the company was great and everyone had a blast. On our way home we got to see the sun rise (once again) and rode the S-bahn back with a Scottish friend we had made there. 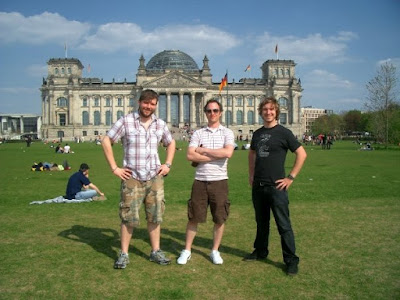 As you can imagine we got off to a late start on Sunday. But once again we were blessed to have the lucky weather. We spent a majority of the day lounging in the parks, walking Berlin, and using public pay toilets... a great day in my opinion. In the evening we met back up with our friends from the party and headed out to a little bar down the street. Little to our knowledge, two of them hadn't slept and ended up falling asleep at the bar! And you can imagine who had to deal with getting them out... no, not Superman, just Ebe and I.

Monday was another beautiful day, but unfortunately for me I had to go teach some of the dumbest kids I have... but none the less, we met up with both of them after their adventure with Knut and the rest of the animals at the Berlin Zoo, as we lounged in front of the Berliner Dom in the Lustgarten enjoying a nice cold beer. That evening we enjoyed more tasty local food, which impressed both them by it's deliciousness and value. We ended up having a nice relaxing night at home with a few other friends, enjoying some beers, watching and impersonating South Park, and reminiscing about the fraternity days. We said goodbye to both of them on Tuesday.

We were really glad they had the opportunity to visit us while we were here. We couldn't have asked for better weather, and I hope with them leaving us, they don't take it with! Until next time bat fans! Same bat channel, same bat time!

I'm an SAE from So. Cal. and live in Berlin... where can we get in touch

Hiya SAE in Berlin! We've met a lot of great expats through the blog and would be happy to meet-up. You can contact us through this page's facebook: https://www.facebook.com/pages/Back-to-Berlin-and-Beyond/195413127212010?ref=hl or our e-mail ianandebe {at} gmail {dot} com