Once again, we have decided to rate the cities we are visiting with the parental units. The first leg of our mini- central European tour, we start with breath-taking Budapest. 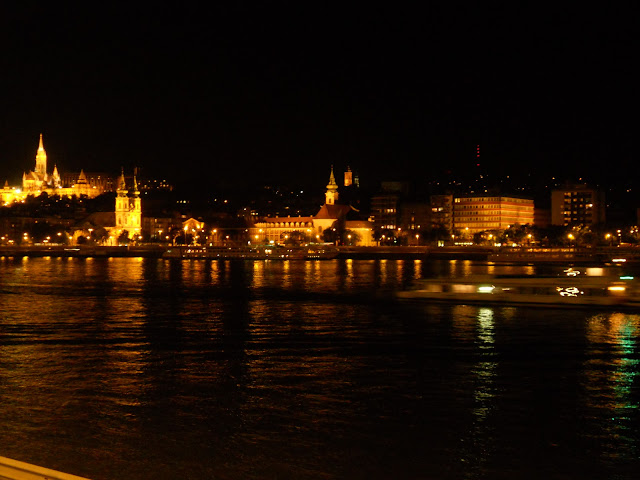 Ratings will be done in paprika. These are the opinions of our fine raters in not an iota of any official capacity. 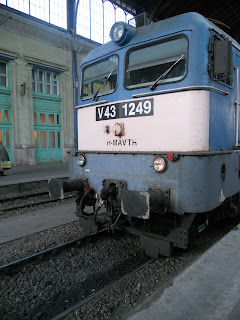 The train from the airport into town had plush seats and old-world looks – complete with a few scary looking people, that turned out to not be scary at all. The subway tube under the Danube River had one of the steepest escalators I’ve ever seen – and the people coming up when we were going down looked absurd as they leaned forward to compensate the angle of ascent and the speed! Trams and trains were readily available to get everywhere. All our guiding was done by the multi-talented Ian – who was always generously thinking ahead on how to get somewhere in a timely fashion. We also rented a car – a Skoda – as we left Hungary – and the people working at the rental definitely worried me a bit. The car, however, was fine. I remembered how to use a stick-shift without too many odd shifts, and again with Ian being the navigator we were able to navigate our way out of Hungary to other places, and back to Budapest in four days. 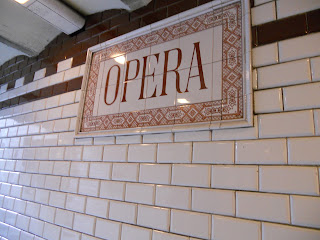 Dave
5 paprika -
I now know what they mean when they call it rapid transit. Fastest trams on earth. Don’t dawdle at the door. 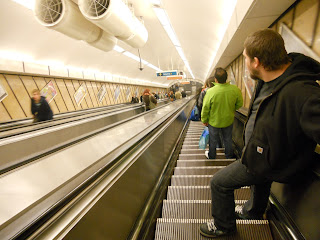 It's amazing how frequently trains & trams come. We had to wait just a few minutes at most stops. Very impressive in this aspect.

And, if I remember correctly, Budapest had continental Europe's 1st subway.

ebe
4 paprika -
EasyJet flight was not nearly as horrific as everyone described (then again we are used to Ryanair). Love being able to fly somewhere for around a hundred dollars. The train into the city from the airport was from another era. I felt like I was in a different version of Wes Anderson's Darjeeling Limited.

And once you're in the city, you could literally see the next tram coming as you got on - awesome. Platforms and directions could be a bit difficult to navigate (plus the whole "Everything's in Hungarian"), but it was still wonderful to get around. Loved the metro's crazy sirens, bells and whistles. So glad we bought tickets to cover our time as patrols were out TOUGH.

cheryl
3.5 paprika -
We secured an apartment through AirB&B in Budapest. The place we rented was convenient to everywhere we went. It was located in the heart of the Pest side of the city – and was built in the 1930’s. The apartment had a full kitchen, living room, two bedrooms and two baths. Quite lovely. The owners were two charming gentlemen – that gave us many insights into places to see in their city – and they obviously took a lot of pride in being Hungarian and in the apartment that they had updated beautifully. Unfortunately the exterior of the building was undergoing updating that we had not been warned about which made locating the address of the building difficult, as well as impossible to open windows in the bedroom, not allowing any cool nighttime air. We also had eager construction workers waking us before 7am with construction work including jack-hammering. This will be an excellent place to stay, worthy of 5 paprikas – once the exterior construction is completed. 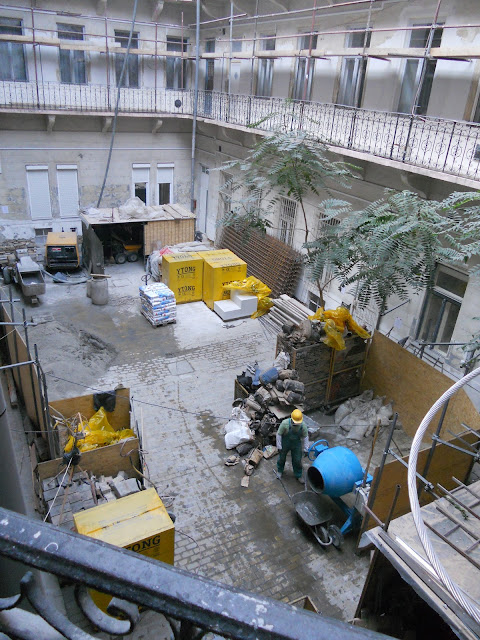 Dave
3 paprika -
Only a 3 because of the construction on the building and the squeakiness of the floor.


Ian
4.5 paprika -
The apartment was huge & located in the middle of town. Huge rooms, tall ceilings, but the only drawback was the construction and building being covered in scaffolding.


ebe
4 paprika -
AirBnB has become our new best friend. It helped us locate this lovely 2 bedroom apartment. We each ahd a room, huge kitchen, living room, 2 bathrooms, the knowledge of our inn keepers. Maybe a little too much knowledge- those gays could chat up a storm! BUT they gave us flawless recommendations & were crazy welcoming & warm.

The only problem- and it was a big problem- was that the building was under construction. This meant a dusty construction zone on the ground floor, all windows covered in plastic, and noisy mornings starting at 9am. Ouch. Should have been revealed before we got there, but we can make do with anything and there were enough positives to keep us happy.

For others looking to stay in Budapest - there are about a million accommodations of all kinds available and prices are insanely reasonable. Staying there had us all looking at the "For Rent" signs & considering staying here permanently. 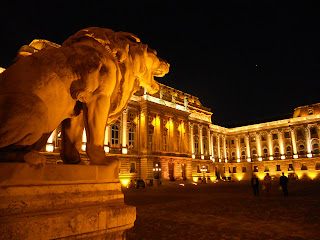 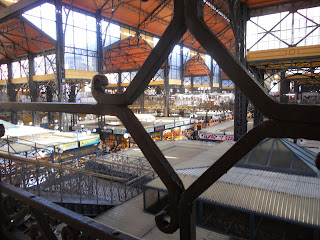 Beautiful city filled with architectural treasures on every street. The high points included the Chain Bridge, Fisherman’s Bastion, Parliament, Saint Stephen’s Castle, the Market, the Agriculture Building, the Opera House, the train station. Definitely the most beautiful European city I’d ever seen. The sights were amazing. Obviously the inhabitants care deeply about their city – and it shows. I loved the market and the variety of offerings from the stalls. Some of it was touristy – but I was a tourist and loved it. 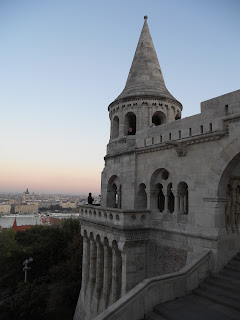 Ian
4.5 paprika-
The city itself is a sight to behold. Everywhere you look there are beautiful buildings and interesting statues. The actual attractions are splendid from hero's Square to the Terror House all the way to Castle Hill.

ebe
4 paprika -
Buda & Pest are beautiful; together they're a knockout. The city is a wonder and just walking around (our favorite kind of touring) is magical. We didn't take advantage of the baths & the Labyrinth was closed (a serious disappointment) but there was STILL tons to do. Castle Hill, Fisherman's Bastion, House of Terror, the market, Parliament, Chain Bridge are photographers fodder (even a bunch of amateurs like us). We got good at pulling at the camera to snap a quick shot.

PLUS - We got to the Opera House for Kamamoz Brothers. The ballet was so beautiful & powerful, it was easy (for me, not so much for Ian) to forget we had bought the cheap seats and our knees were tucked up against the seats in front of us. The theatre is a true gem. Do whatever you need to get in for a performance, and pay the medium price. 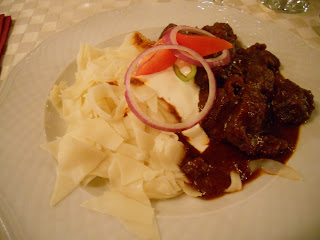 4.5 paprika -
Our first evening we went to Kiskkakuk (cuckoo in Hungarian), on a reference from our landlords. This was a delightful evening celebrating our daughter and son-in-law’s second wedding anniversary. The restaurant, service and food lived up to the recommendation. We all had different entrees, bacon-wrapped sirloin was mine – and we shared bites of each others. For dessert we had chocolate soufflé with orange sauce and crepes with vanilla sauce. Heavenly. Our other meals were almost as good. We made our own breakfasts including some jam that the landlords had made and had for sale in our apartment. The meals in Hungary were amazingly inexpensive, hearty, well-seasoned and yummy. 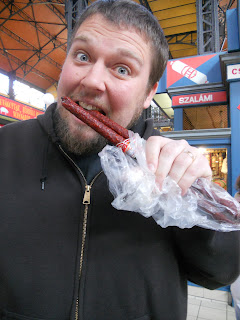 Dave
4.5 paprika -
A little hard to find nice places, but when you did – it was great authentic food with great service.

Ian
5 paprika -
Horse meat is delicious! And apart from that, everything else was too. Amazing meals were to be had on the cheap. Even ate at the President's favorite restaurant. 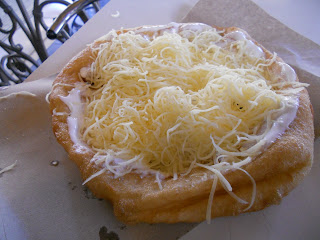 Our first night at Kiskkakuk (recommendation of our friendly AirBnB host) was really special. It was our first night in Budapest, Ian & my 2 year anniversary, and this place was the perfect setting for a magical evening. Elegant service, beautifully prepared Hungarian specialties, and local beer & wine. Oh- and the desserts! Chocolate souffle with citrus sauce. Yeah. WOW.

Another favorite was the Lángos. A fast food specialty of deep fried flat bread topped with anything you can think of, traditionally sour cream and cheese.

NOT a favorite - horse sausage. I know, I know.horse meat is common and nothing to be afraid of. But when you spent a good 20 years working together with your equine partners to greatness - the thought of sad unwanted horses being slaughtered for meat is unsavory. A mistake buy had Ian eating this sausage alone.

cheryl
4.75 paprika -
We have actually played with the thought of living an expat life here after retirement. The biggest drawback for us would be not speaking one iota of Hungarian.  However, the city is beautiful with lots to see and explore to keep you busy for a long time. I had read that Budapest is a popular city with other European and American expats – affordable real estate, central European location, temperate climate, etc. Although a member of the European Union, Hungary has not been allowed to use the Euro and still has their own monetary system using Hungarian Forints. Hungarian sales people have a better attitude toward service than those generally found in Berlin, but there is a large trust factor required. We did end up with a counterfeit bill being given to us in change (equal to approximately $15.00) and the rental car company guys really worked hard to find any damage to the car on our return to increase the charges. However, if we go the expat route on retirement - - Budapest will definitely be considered as a potential place to live.


Dave
4.5 paprika -
Would love to go back and spend some more time. Feel that there is a lot more to see.

Ian
4.5 paprika -
Our first experience with Budapest wasn't the best. But with a little homework I was simply blown away upon our second trip there. Truly beautiful city, delicious food, interesting sights, and not having to spend a lot of money is a great combination.

We were happy to take a second run at this city, Not:
This trip was awesome. The food, the city, the company...we had an amazing time. It was a great adventure to take with the P's, and a wonderful experience to have together.

More pics of our Buda Loving


More pics of the beautiful city.

To find out about other cities we've visited, click on the "Ratings" tab.

Email ThisBlogThis!Share to TwitterShare to FacebookShare to Pinterest
Labels: budapest, ratings, review, road trip, Travel, Where to Take Your Parents in Europe

I give this post 5 paprika! Was that escalator to the subway as steep as it looks??? (The one in Prague freaked me out a little...so long and so fast!)

Thanks! Too funny you mention Prague. Those are some the steepest/fastest we've ever seen, but yes- Budapest was almost as crazy.