Naples - When the Moon Hits Your Eye

As Berlin summer weather continues to prevail, (RAIN...lots of rain) we are brought back to a sunnier time, just a month ago, when we were in Naples with my nephew.

Ian suggested titles for this post that were both apt and ridiculous.


*Naples, a lovely place to wa- WATCH out for the vespa!*
*Rome wasn't dirty enough for you? Ben venuto a Nopli*
*Buffalo Mozzerella and the Mystery of the Stolen Passports*
*Dr. Palm Tree - or How I Stopped Worrying about the Heat and Love the Camora*
*Naples - We came for the pizza, we stayed for the dirty-ass fountain*
*Don't want to siesta? Go for a walk with the tourists and Indians*
*Naples - where the majority of people are Fat*


Naples was all of this. It's often described as the closest thing Europe has to reality travel, meaning you step right into city life, not the tourist version. There is no tourist version in Naples. The city is loud, and hot and messy. The city is breath-takingly beautiful, non-stop motion, strikingly corrupt, and languidly tranquil. It was everything bad we had heard, but so much more good than we had hoped for. What exactly had we heard?


The bad (with it's silver lining):

Rick Steves, Norhtwest (USA) Travel guru for us and the middle-aged American masses said it best:

"If you like Italy as far south as Rome, go farther south.  It gets better.  If Italy is getting on your nerves, don't go farther.  Italy intensifies as you plunge deeper." 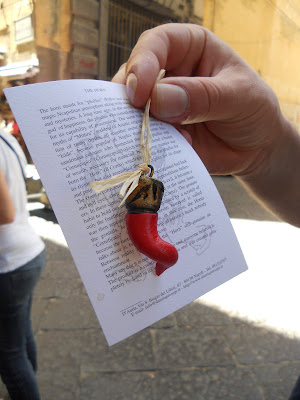 To give you a better impression of the place, we gave our inexpert rankings. For Naples, we will be giving our ratings in Corno.


The story of the Corno
You see these ornaments in ever tourist store so we initially resisted buying one. But our habit of picking up Christmas ornaments from our travels and the cheap price tag (.30-1 euro) overcame our skepticism. And we got a bit of history with it. Win-win!

The horn stands for "phallus" (Fallo) and was born in the magic Neapolitan atmosphere along with many superstitions and mysteries. The Horn is considered a weapon of defense against bad luck and evil eyes, always a fear among the superstitious believers. In these cases, it became a habit to hold out both hands , pointing out the forefinger and the the little finger (Corna) three times accompanied by the scratching of the genitals.


Fascinating! I think we may avoid the scratching of genitals and the evil eye.Without further ado, your faithful raters:

After our secret ballot, the boys were surprised to see my high score. After hearing their reasons, so was I.

We picked Naples because it fit in the limited time frame of when Kyle was visiting and summer prices were affordable (flights were around 150 US per person). Both flights to/from Capodichino Airport (IATA: NAP) were easy peasy with EasyJet (we are undemanding fliers) and we made it into the city with little fuss. The airport was actually surprisingly chic and cool. Alibus is the private shuttle service most people use to & from the airport and it is a steal at 3 euro and gave us our fist delightful looks at life in Naples. To go back to the airport we had to hunt & search for the pick-up as construction has the station a bit transient and no one could tell us for sure where it would be. After some anxious waiting, it showed up - wet. Literally. The air conditioning had broken and soaked the seats. I needed cooling down anyways...right?

We were then halted by a befuddling subway system. We had trouble locating the entrance, using the ticket machines, signs that led to elevators that weren't there, closed information office, which subway to take (there are only 6 lines)....Not a good start, especially since Ian really is tour guide extraordinaire and rules Berlin's system.

After finally figuring it out, the rest of the systems of bus, tram, and funicolare and ferry service went relatively smoothly. I recommend taking the funicular to the top  for a really fabulous view of the city (top photo). It is a great asset that travel is cheap at € 1,20 ticket that can take on most modes of public transport. Beware of crowded buses (we completely avoided) as that is a pick pocket paradise and is where a women we met got her passport stolen. Private ferries to the islands aren't that cheap in the summer (9-20 euro each way), but worth it.

If you can, I would highly recommend not renting a car or vespa here. These people are profis! And crazy. I tired to catch shots of all the madness we saw on 2 wheels, but will have to settle for this family pic rolling through the tiny streets of the Spanish Quarter with baby in between. 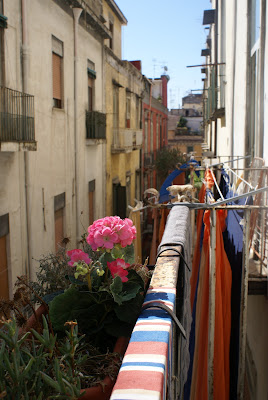 Ian and I have mostly decided that our hostel days are behind us. Most of the time you can find a place with a kitchenette & private bath for the same price as two beds in a hostel. But with our third musketeer and the chance to meet some other young travelers like Kyle (not oldies like us), a hostel was the ideal solution.

Our friends had stayed in a private room here the summer  before, but the place comes with it's own accolades. Perfectly located in the student area, it is down a idyllic Neapolitan alley and up 3 sets of stairs. From there a friendly English speaking staff sets you up in a private room or 6 bed dorm with common room, wifi, computer access, large kitchen, and 3 shared bathrooms with showers. Nothing fancy, but the outstanding service and easy atmosphere made it one of our favorite hostel experiences ever. They also provide a safe to lock up your valuables behind the desk, towel rental (1 euro, 1 euro deposit) and truly suburb customer service. Plus - a great sleep mate, Simon the cat.

Kyle liked his first hostel and we were pleased with their offerings. The dirty fountain in the square became our hang out, along with the locals. Only complaint - breakfast offerings are weak but standard. A few choices of bread, jam, nutella, coffee, and an orange. 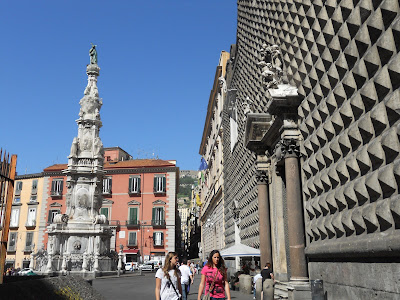 
Naples has sights, Castel dell'Ovo, Castelnuovo, Museo Archeologico Nazionale, Piazza del Gesù and Piazza S.Domenico Maggiore, Duomo ...
but none of that really matters because Naples is the sight. We did what we do in most every city - walked, ate, and took picture. But we enjoyed it so much more than I think I ever have before. The city is adamantly, robustly virulently alive and every moment there is something to watch. As a people who live their lives on show on the sidewalk and streets in front of their buildings, walking around is better than live theatre.

That said,  Museo Archeologico Nazionale is supposed to be a must see, but we did not. Said to be shabby on the outside, but spectacular finds on the inside from the ancient world, part of the museum was closed when we were there because of the lack of funding. The hostel staff didn't tell us not to go, but we felt like we got the hint. We went into the churches and ohhed & awed (Kyle's first European cathedral), but I  mostly enjoyed participating in the passegiata, a traditional evening walk about town along the water and past the castles.

Getting back to street life again, we actually had some of our best times right at the fountain next to the hostel. We drank 1 euro Peroni and had our first amazing 3 euro pizza. We watched teenagers aggressively kiss and grope under disapproving stares of the older Italians. And Kyle jumped in on a bizarre game of ball with a group of Neapolitan in a truly international experience. 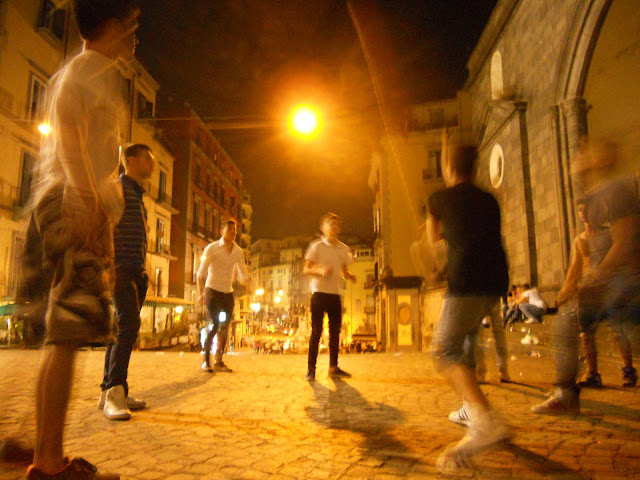 We also went to Pompeii and the island of Procida and later posts will cover these excursions.

A full post about the food has to come about, because there was just so much I loved. I had mozzarella before, I even had it in Italy. But this....served as an appetizer with prosciutto, it was bursting with moisture and truly one of the best things I've ever eaten.

To accompany our after dinner, before dinner, midday, morning walks - what pairs better than gelato? So we ate it. A lot. At about 1.50 - 3.00 euro for several scoops, we spent time meticulously studying the flavors and comparing the best combos. For my money, I got to say some form of chocolate and berry. Mmmm..... While nowhere knocked Bologna's Gelatauro off of it's pedestal, we did some intensive research. 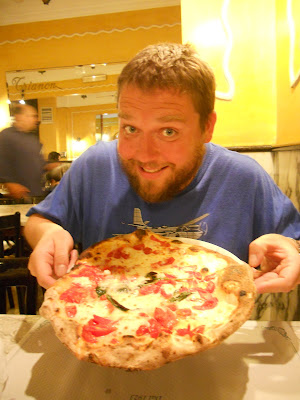 And pizza. Did you know Naples is the birthplace of pizza? We knew. It was half the reason we booked the trip. We ate at some hole-in-the-walls and some legendary places and I devoured it all. Marinara, margherita...this was pizza pie perfection.

We had wanted some sardines and seafood (specialties of the area) but somehow missed it. And some of the desserts you just gotta try weren't exactly our favorite. But that pizza... 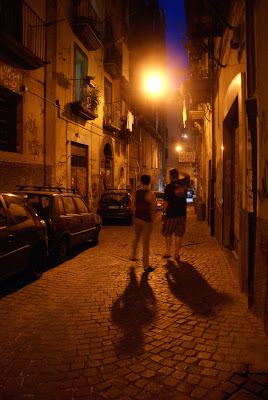 From the rookie European traveler to our getting experienced eyes, Naples is somewhere that shouldn't be missed. Often overlooked because of it's unsavory reputation, the city deserves some amore. Watch your wallet, but mostly beware - you too, may fall in love. 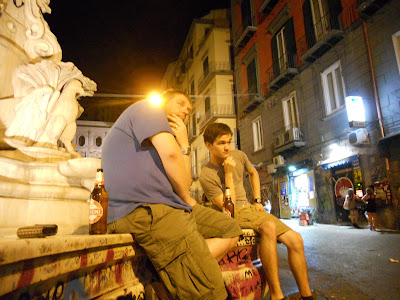 Of course I've got about a 100 more pictures of Naples. If you would like to check them out:
When the Moon Hits Your Eye

There was so much Naples to talk about, I also be posted:
The island of Procida
Day trip to Pompeii
Pictures of the Street Art of Naples

Compare these scores against some of the other places we've been with the "Ratings" tag at the bottom.