A Day Without the Internet

Because of stupid reasons, the internet company needed to turn off our service yesterday to switch over the contract. I was mostly prepared, or as prepared as you could be to have a long day home alone without internet, like in the bad old days.

I started with napping. I can never get back to sleep when I’ve been woken and usually I get up when Ian gets to work, packing his breakfast of yogurt, banana, & granola bar and settling in to work at the computer. But today I thought I would give sleep a try, especially since I found sleep entirely unattainable as this weekend’s heat wave – Berlin’s last minute attempt at summer – continued into the night. I was mostly unsuccessful, but I closed my eyes and listened to Simpson’s season 13 commentary and learned many an interesting thing about one of the greatest animated shows ever.

Giving up on sleep, I got to other kinds of work. I repaired the button on my favorite pair of flats that I have carried – broken – through all of our flats. I re-sewed the polizei patch onto my bag. I made sun brewed ice tea. I broke a glass. I cleaned it up. I chopped up cauliflower & onion to slowcook and use for taco salads tonight & a pasta dish later this week. I watered the vegetables. I opened the balcony door.  I organized a kitchen cupboard.  I fought the wind trying to slam the balcony door. Getting hungry, I heated up meatballs & tomato sauce for lunch and put on Love Actually (review under movies). Organized gads of photos. Then on to write two pieces for personal endeavors (plus this) that I have been putting off. And we still haven't bought a washing machine so I washed some clothes in a tub cuz we’re classy like that. I wrote this stuff down so I could feel like I accomplished something. I knew that when Ian got home & asked what I'd been doing all day my mind would draw a blank and I'd say something like, "Nothing".

The best thing I did all day is spend time with you new bunny. Yes, that’s right, new bunny. I wore Ian down and we now have 2 surprisingly hilarious rabbits. The first trip to the tierheim was when we got Schmidty. The second trip was last weekend with our friends who kindly drove us. Alas, we returned bunnyless as traffic and detours slowed us down so that the place was closed by the time we got there. I was a little devastated and Ian had to deal with my moping all week. But Sunday was the day! We found a bunny we loved and were told we couldn't have him (just turned in and needed an exam so he wouldn’t be ready for a few days). How German. We found a female we were considering, but a tooth problem meant we would need to bring her back every 2 weeks for filing, which simply isn’t going to happen as the trip out takes 1.5 hours to get there. We were directed to a female that was alarmingly pretty with her black eye markings and black tipped ears. We’ll take her! If you are in Berlin & have any interest in animals at all - go to the Tierheim! It's a fabulous facility with lots of loveable animals to adopt. Ian practically had to drag me away to stop me adopting a dog or a cat.


The buns are currently tearing up the kitchen in their free range area of trash houses. What is a trash house, I hear you say? We’ve learned that bunnies like to dig, and chew and hop to high places. A perfect solution for these possibly problematic behaviors is offering the bunnies things we would usually throw away, like cardboard boxes, toilet paper rolls, and newspaper. They chew, they dig at it, they live in it. Trash house. Works for all of us. 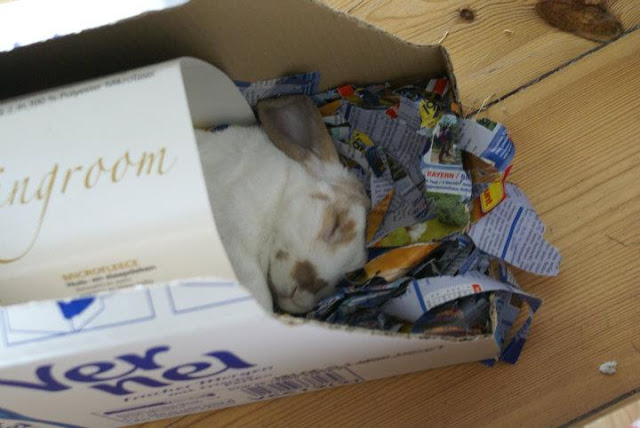 We were nervous about the introduction of the bun huns, but it mostly went really well. We set up a neutral space in the bathroom and then let them meet. Schmidty was only interested in the space. He literally hopped over her to look around. Then began the humping. She submitted immediately, but Schmidty kept at it to show her who is the boss. They really do seem to be getting along pretty well. She's a little uncomfortable as all of this is new, but Schmidty looks the happiest we’ve ever seen him. And he can look pretty hippty hoppty happy.

Tomorrow the internet should be back. And I should have someone else to admire my lovely bunnies with. Our little German bro, Thomas, is back form a year of social service in Mexico City. It’s gonna be great to see him, hear about Mexico, and watch the bunnies.

Guess your internet's back then!
Don't start me on those phone companies. We had the same shit where it was going to take WEEKS to switch the contracts. Anyway, don't start me...
And congrats on the humpers!

Hey - All three of our German kids together. Yee-Ha. Loved Travis's comment on FB that Thomas and Ian look like Robin Hood and Little John - theyup sorta do. Hopefully we can catch with your bunny doings and the rest of your life sometime soon. Love you!

I just found this by semi-chance, but hey, you're one hell of a productive person. When internet is down I usually cry/eat/think of what I would do if internet would work. And my only pets are on facebook applications, so I cannot even take care of them :D

I am (mostly) very happy to have an apartment in our name and these things really are just annoyances...big annoyances.

It was great to get some time with Mr. Thomas and an upcoming post will certainly cover our epic quest for Mexcian food supplies in Berlin. It was quite a journey.

And @Federico - love the "pugs not drugs". Pets are usually a gateway drug straight out of boredom.

I definitely just spent 15 mins on the tierheim website falling in love with pups. thanks a LOT. ;)

An excellent use of time Ashley! Even better, go get Hazel a friend. Two heads are better than one...or something