Learning to Love in the Land of Whiskey, Whisky & Bourbon


When a friend asked if we wanted to join a private tasting of bourbons and whiskeys at a shop in Berlin, there was only one right answer:

As frequent drinkers of the cheap stuff, whatever that may be, I am not all that familiar with anything as tasty as whiskeys and bourbon. Despite my sketchy knowledge, we looked forward to a night of fine drinking. Six of us arranged to meet at the shop in Steglitz and drink to our hearts content. What we got was so much more. From 7:30 to about 11 we were inundated with fascinating facts about whiskey, whisky & Bourbon.


All bourbons are whiskey, but not all whiskeys are bourbon. What's the difference?*

The main difference between scotch and whisky is geographic, but also ingredients and spellings.


Chuck's German wife, brother-in-law, and American friend also accompanied us on the adventure. We all got to know each other a lot better throughout the night. 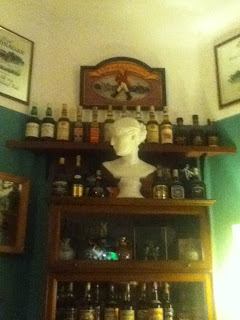 A small space with shop upfront, private drinking room in back - it was packed with liquors from the exotic to the affordable. Attractive lowlight made for an intimate setting, but not such great ipod pics. Put on your whiskey goggles folks.


We were impressed by a well decorated table. A beautiful assortment of liquors begged for us to try them at one end, with a variety of snacks and chilled bottled water available to fortify us.

If I had been as smart as one of our tasters, Roland, I would have used the 2 tasting glasses to compare liquors, but I mostly just used one glass, using the supplied water to clean the glass between liquors. There was also a beaker of water with an eye dropper thing to add water to your drink. Fancy! 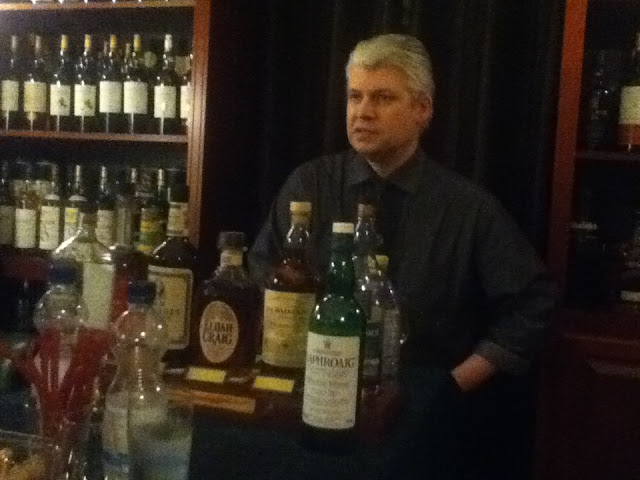 Shop owner, Markus, bravely took on our American-German group. An absolute wealth of information, I enjoyed the thoughtful storyline he put together through liquor. I am sure a real expert (unlike me) would be able to make better use of his bottomless knowledge.

In true drinking fashion, I lost track of exactly how many we tried. There were about 8 bottles set for us, but he showed us several different bottles and paraphernalia throughout the tasting in response to questions and interests. Though I can be hypercritical of many things, I had such a good time I have barely a criticism for these booze. You will just have to try them yourself.

Our first taste and I actually braced for impact a bit, expecting it to have a harsh feel on my tongue. Surprise, surprise (for novice whiskey drinker me) - it was perfectly smooth.

"The first of the single malts‚ and one that will leave you with an exceptionally smooth finish. the distinctive Bushmills light fruity aroma travels over the lip of your tumbler to deliver 10 years of maturation mostly in bourbon seasoned barrels" 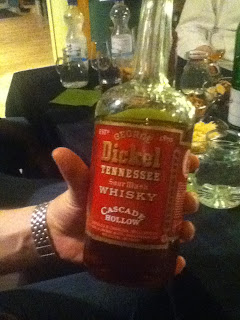 This one held out as my favorite throughout the tasting. We tried the Cascade Hollow, which "replicates the style of whisky George Dickel created when he opened his distillery in 1870". 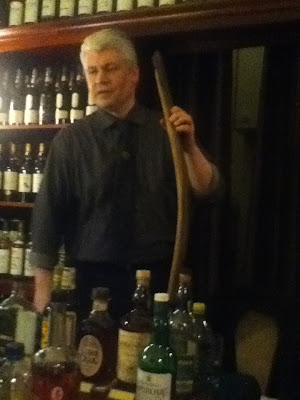 By law, in the US barrels must be be constructed of oak. Markus showed us the actual oak wood used for a cask. It has been bleached almost halfway through by the liquor, drawing out the flavor of the barrel. Between 60-80% of a whisky's flavor can come from the cask. The shape of the barrel determines oxidization and affects speed of maturity with the smaller the cask = faster maturation. Scottish whiskey may use a variety of woods. 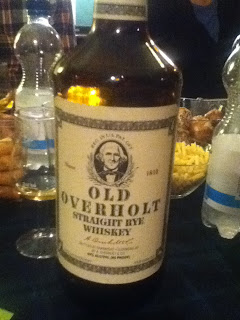 This provided the example of American rye whiskey distilled by A. Overholt & Co. It is one of the few straight rye whiskies available at most liquor stores in the United States. Like many of the bottles, it was once marked as "medicinal" alcohol.

It is reputed to have been the alcoholic beverage of choice of the gunfighter and gambler Doc Holliday. 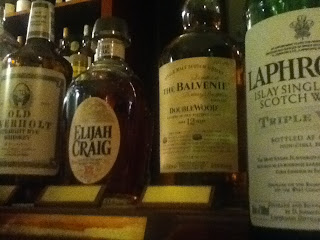 This is a 12 year-old super-premium bourbon whiskey. The company is headquartered in Bardstown, Kentucky, and its distillery (called the Heaven Hill Bernheim distillery) is in Louisville, Kentucky. 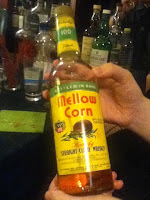 A 12 year old single malt which "gains its distinctive character from being matured in two woods. Over its period of maturation it is transferred from a traditional oak whisky cask to a first fill European oak sherry cask".

A straight corn whiskey, it was the cheapest liquor we tasted - and it looked it. Far from unpalatable, it was was perfectly acceptable. If I hadn't been served it next to it's much classier neighbors, I wouldn't have thought twice. 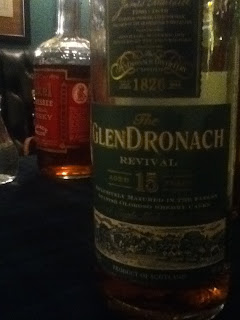 A single malt, this is "Bottled at 46%, the GlenDronach Revival is non chill filtered and of natural colour".

I think it was around here that we learned about the smoking process of the barley. Heather is used to change the flavor, with the location where it's grown dictating the taste. 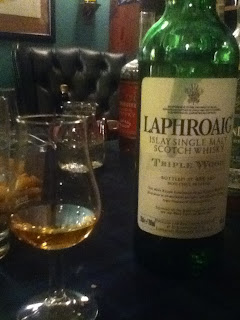 We  saw this bottle before we tasted it. It lined the walls of the tasting room in a wonder of varieties. The version we tried was an Islay single malt Scotch whisky. Laphroaig is one of the most strongly flavoured of all Scotch whiskies, and is most frequently aged to 10 years, although the 15- (now discontinued) and 18-year-old varieties are common (the 27-, 30- and 40-year-olds are rare and expensive - we saw a few on the wall). 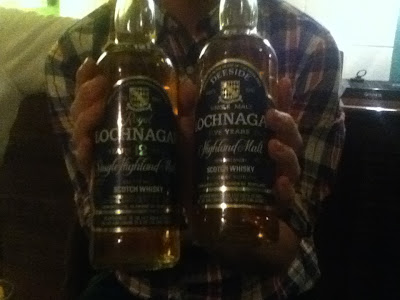 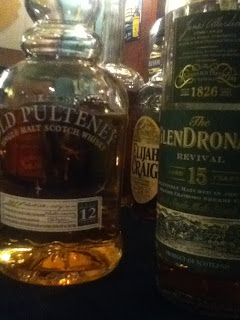 This distillery was established in 1826 AD in the name of Sir William Pulteney (who died in 1805), and for whom Pulteneytown is named. The distillery is the most northerly on the Scottish mainland and was quite inaccessible, except by sea, when established. Barley was brought in by sea, and the whisky was shipped out the same way. Many of the distillery workers were also employed as fishermen. Characteristics of the whisky are attributed to exposure to sea air during maturation. 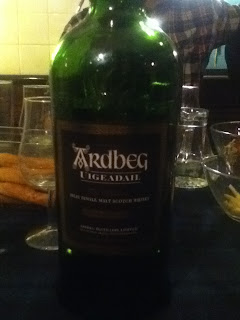 Markus warned us this one was a mouthful. A Scotch whisky, it is  distilled on the south coast of the isle of Islay, Argyll and Bute. The distillery claims to produce the peatiest Islay whisky. It was - in a word - intense.

You could be confused by all this drinking and think it's unhealthy. But we actually worked out during the tasting that all malt whiskey is organic. So go bio & visit the Whiskey Kabinett!

“There is no such thing as a bad whisky. Some whiskies just happen to be better than others.”
William Faulkner 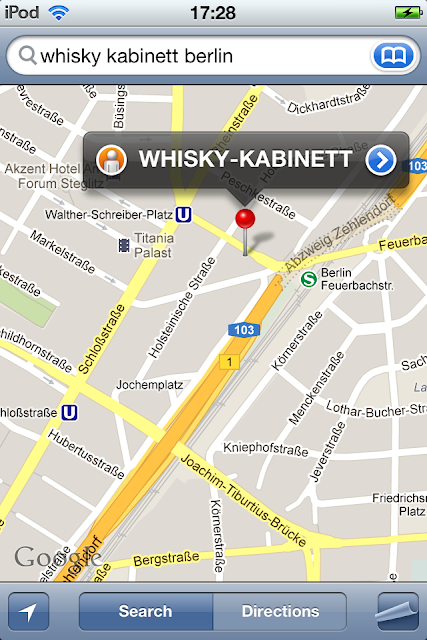 
*Please forgive any inaccuracies I may have posted. They are certainly of my own whiskey addled brain and not that of the expert mind of Markus. Feel free to make corrections in the comments.

Cool, thanks for sharing! Whiskey tasting has been on my to-do list for awhile. Now I know where to go in Berlin!

Next time you do this you HAVE to tell me!
Uisce bheatha is Irish for whiskey, as it's being made, when it's made, and as it's being consumed. Always "water of life." Sure you can't live without it!
Tullamore Dew is probably my favourite, though my mouth is always open for new suggestions.

I'm not a big whiskey fan but my husband is and he would have love to go to a tasting like that! I'll have to see if I can find him one similar near us in France. In the meantime, I'll impress him with all of my new whisky/ whiskey knowledge :)

This is certainly a place to go & a thing to do in Berlin. I think we can write-off the whole things not as boozing, but educational.

@Der Irische Berliner - obviously an oversight that you weren't mandatory included on account of your Irishness. I do recommend even just visiting the shop - Markrus is a wealth of information.

And do show-off your new knowledge @Sara Louise - I'm going to!