I love roller coasters. I always liked them as a kid, but kinda let them fall to the background as I became an adult (kinda. I'm getting old so I better start thinking of myself as a REAL PERSON). But a fortuitous trip to Disneyland when we were back living in the States re-ignited my roller coaster fire. I wanted to feel the wind on my cheeks, hear children scream, and have Ian clutch my hand like a little girl on the biggest, baddest roller coasters we could find. 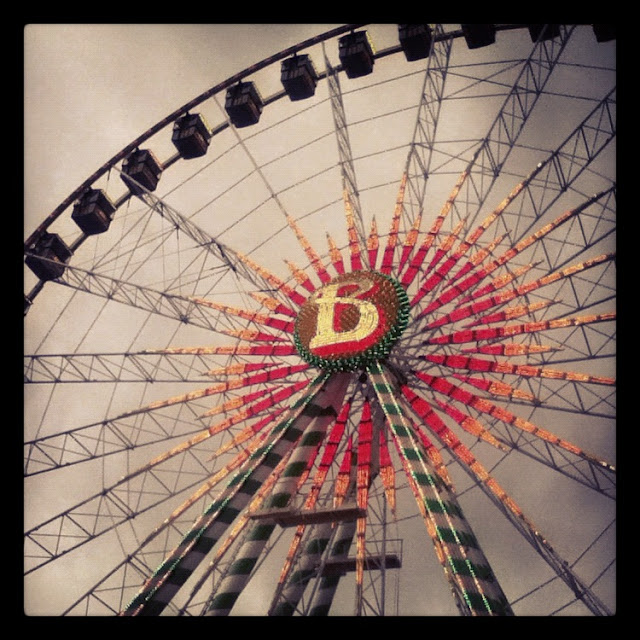 The second most popular theme park resort in Europe (after Disneyland Paris) is actually located in Germany! The park has over 4.5 million visitors a year and is located in the south- west corner of the country, Rust. It has roller coasters.

We worried the winter season might not offer enough to do as the site notes some attractions are closed, but decided to give it a try. Eventually we figured out that Basel, Switzerland was not only a cheap flight, but an easy way to get to Rust. Bonus trip to Switzerland!

The park is run by the Mack family and was opened in 1975 to showcase their amusement ride company. It offers "EuroTrash" with love. The place blatantly rips off Disney (the park mascot is a grey mouse named "Euromaus", pirates ride, tea cups, etc.) but it really does have a unique European flair and at a discount route. Plus the shows were honestly top notch and the roller coasters finally put a little hair on Ian's balls. In a word - awesome.

Check on the details  before your visit as different times of year provide different opening hours, ride availability and entrance price.


Side note: Why does Germany ever bother with round-trip "specials" etc? They barely ever offer any actual savings. 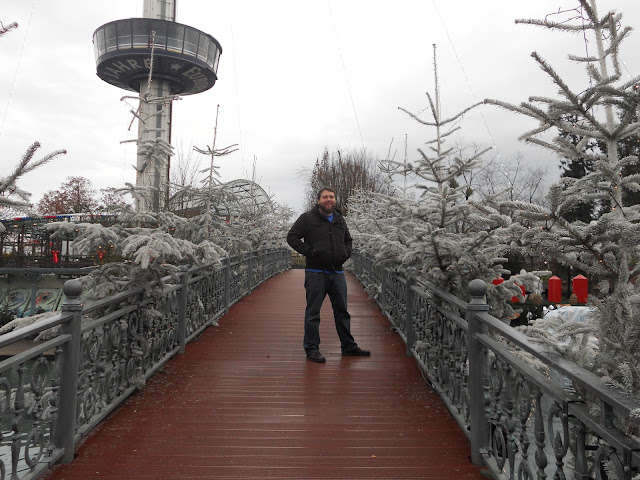 Since we've only been during the winter season (so far...), I can only speak of the offerings during that time. I can say that we were worried a lot would be closed, it seemed that for every closing there was something winter wonderful. Plus, the Christmas styling was positively wacky. Entrance price is discounted, accommodations are plentiful and cheap, and the park was practically deserted allowing us to ride our favorite rides over and over.

The park is located in Rust, Germany which is another name for nowheresville. There are hotels, some grocery stores, and then the park. We ended up staying at one of the many inexpensive Pension options in the small town of Ringsheim, located at the nearest train station. There was a few pubs & restaurants, and our pension upgraded us to a large family-style flat (complete with TV, full kitchen, dining, and living room) since it was the low season. There was also a lovely breakfast downstairs the pension owner was very friendly and helpful.

By train
The nearest train stop (station is too generous as it is literally just a stop) is located in Ringsheim (4 km). A bus can take you to the park.

Arrival from the north: Take the autobahn A5 toward Basel. Leave at Rust (57b) exit, and a feeder road will take you straight to Europa-Park.

Arrival from the south: Take the autobahn A5 toward Karlsruhe/Frankfurt. Leave at Rust (57b) exit, and a feeder road will take you straight to Europa-Park. 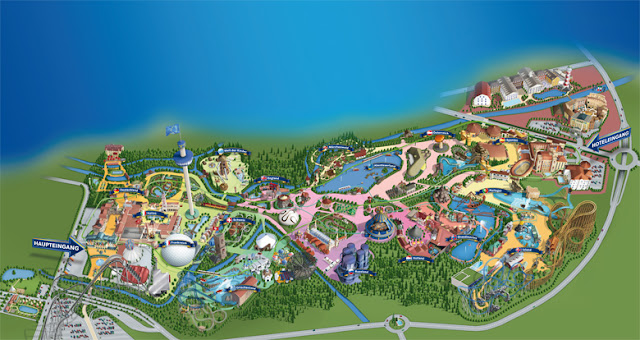 The park is split into sixteen different areas named after European countries or regions. Use this badass interactive map tool to check out different areas of the park. Look for the country customized manholes with city names throughout the park. 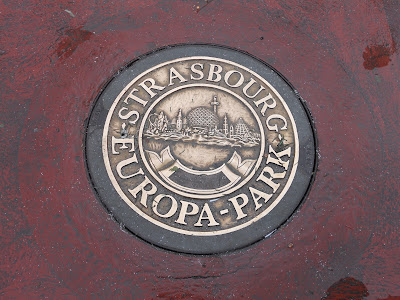 Germany - Closest to the main entrance and one of the older sections. There is a strange magical garden that looked downright scary for children, and grandma statues that looked like someone's grandma had been bewitched by an evil fairy. This is a great area for kiddie rides, but I would say adults should just party on.

Russia - I was really curious what Russia would encompass. And as soon as I saw the Euro-Mir, I fell in love. A bizarre skyscraper looking building, the bulk of this is a spinning roller coaster based around Russian space missions. Techno music pounds upon entry, followed by minutes of slow, dark, upward spiral. At the top, a door opens and you are thrust out into the open air with an incredible view of the park as you spin at dizzying heights. Watch for it in the video at the bottom around the 2 minute mark. 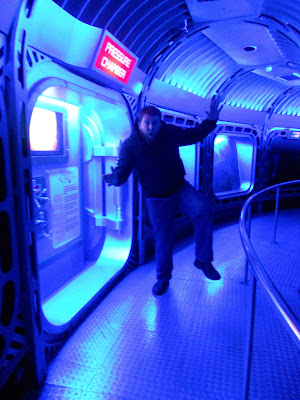 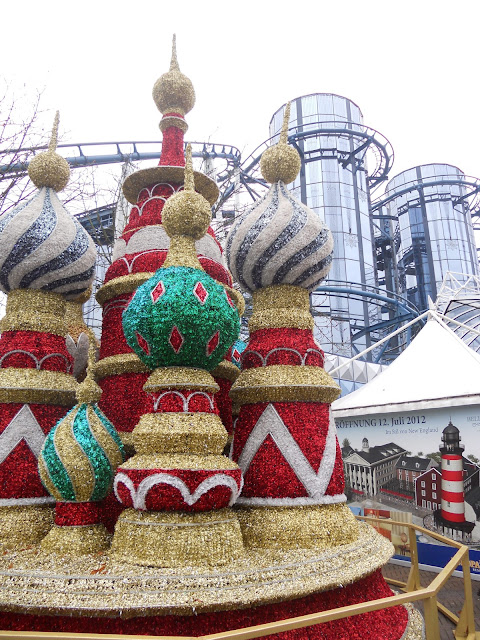 Italy - Apparently this section has things called Piccolo Mondo, Geisterschloss (Ghost Castle), and Vola da Vinci, I have no memory of this area.

France - Sadly, the Silver Star (Europe's second highest and fifth fastest roller coaster) was closed for Winter.There was, however, the eye-catching EuroSat (indoor coaster) that looks suspiciously like Walt Disney World's Epcot. There was also the wonderfully cheesy "Universe of Energy" - a dinosaur themed ride. And the Euro-Tower provided a moment of rest, and a spectacular view of the park as it slowly rose above the park and gently spun. 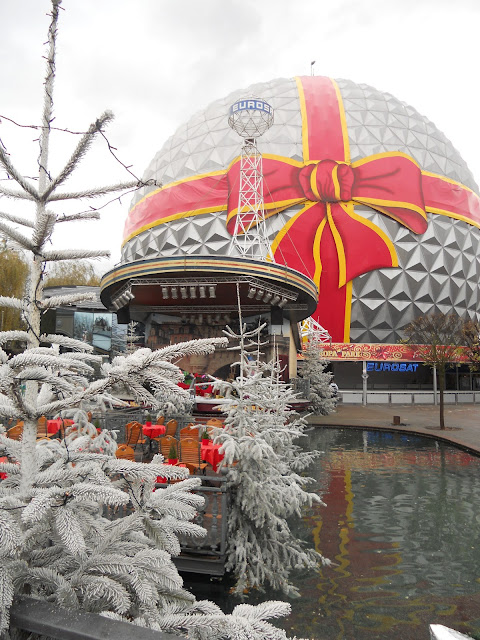 Scandinavia - This area is crazy picturesque with rides like "Fjord-Rafting", "Norwegian Stave Church" and "Fishing Village". There wasn't a ton to do here, but it really was lovely to look at. Plus, I am a sucker for a swinging ship ride or Vindjammer. That is some creative naming.

Portugal - This land of water rides was mostly a ghost town for the winter season. The Atlantica SuperSplash (High-speed water ride) is the main attraction and only for summers. We looked at it longingly, but did enjoy it's very reasonable eating options. We had some very tasty goulash and bread for under 4 euros. The unpleasant gouging that takes place in the US seems pleasantly absent in Europe.The beautiful Ferris Wheel offers another moment of respite (good for us when there was a moment of rain).

Spain - Located at the far end of the park (across from the main entrance, or near end to the hotels), we reached this side at the end of our visit and were a little underwhelmed. It had a few rids that seemed like simple carnival rides. Highlights are supposed to include the Columbus Dinghy (Seastorm ride), Feria Swing (spinning, high speed carousel ride), and a Flamenco stage.
Holland - We saw the wooden shoes and were overjoyed. As frequent visitors to the Netherlands, we are fond of that little country.  Straight away, the "Piraten in Batavia" cracked us up. This is as close as you can get to "Purates of the Caribbean" without being at Disney. The Koffiekopjes was the perfect version of a spinning coffee cup ride and the operator even took our picture.

Switzerland - Having just come from the Swiss rich land, we wouldn't have expected this section to be a highlight. However, two little roller coasters, a spinning airplane ride, and some serious cuteness had me falling in love and cackling like a madman. The Matterhorn Blitz takes you up in a wonky, tilting elevator type motion  with absolutley wicked cut-backs. The Swiss Bob Run really operates on the freedom of a bobsled-like run and was the first of it's type in the world. 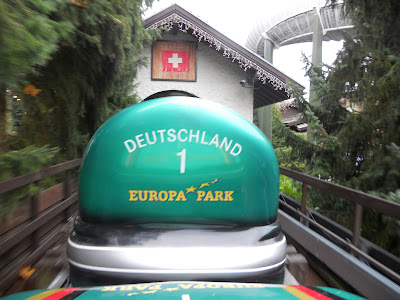 Greece - Another water-type world, the primary attraction in winter was the Ice Arena. I don't remember the last time I was at an ice show, and I certainly don't remember it being this awesome. We were like children squealing in delight at the elaborate costumes, jumps & flips on ice, and sometimes ethereal light accessories. Ohhhhh! Ahhhhh!
England - This was one of the first areas we hit with the Queens Diamonds a "Laser experience". It was silly, but totally fun. On top of this, there is the Silverstone Race Track, British Carousel, London Bus (magic carpet ride), Historama Museum (history of Europa-Park), and Globe Theater. 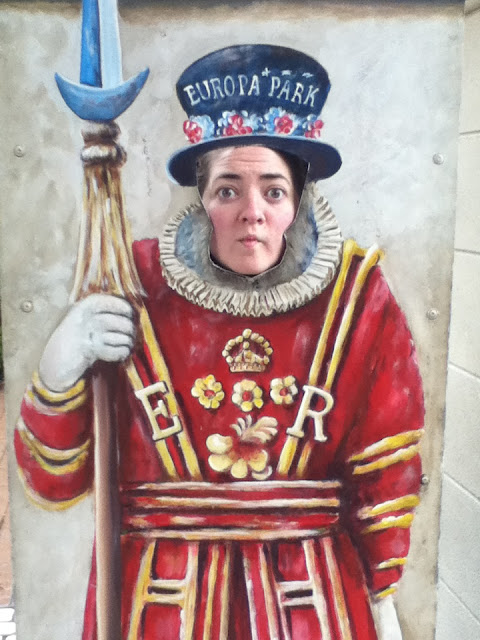 Austria - The Alpenexpress is a great little roller coaster and the oldest coaster in the park. It is themed like a mine train roller coaster - short & sweet. There is also the Magic World of Diamonds - a walk through attraction with animatronics and the Tirol Log Flume (traditional log flume ride through the World of Diamonds).

Iceland - Unfortunately, the highlight of this area was closed for winter. The Wodan Timbur Coaster is a wooden coaster featuring a heavily themed, detailed queue. I'll be back for you coaster...

What was open was the magnificent Blue Fire. A launched roller coaster based on the legendary Blue Lagoon in Iceland, this is easily one of the best coasters I have ever had the privileged to ride on. And because it was off season, we did ride it - over & over again. We probably got in 5 rides in with absolutely no wait time. Magic. The rest of the area is picturesquely Viking Villaged with a Whale Adventures Splash Tours and informational space. 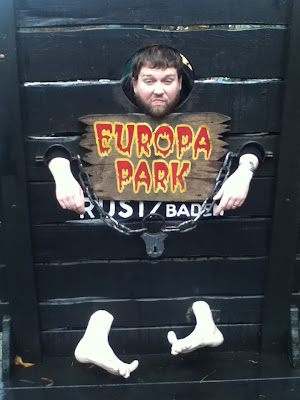 
Overall, I'd really have to say we gave the trip two giant jump shots. 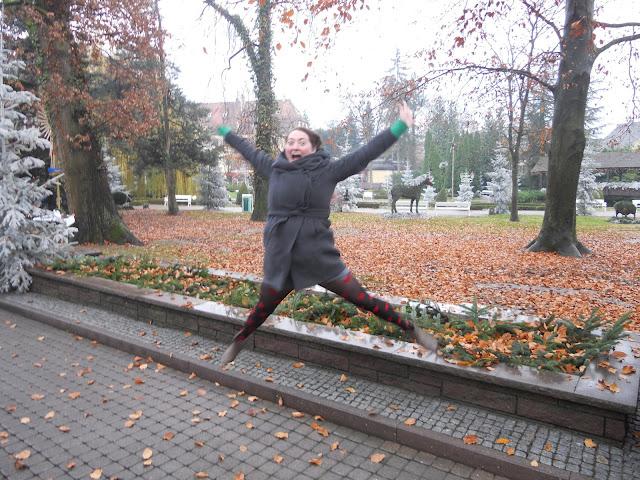 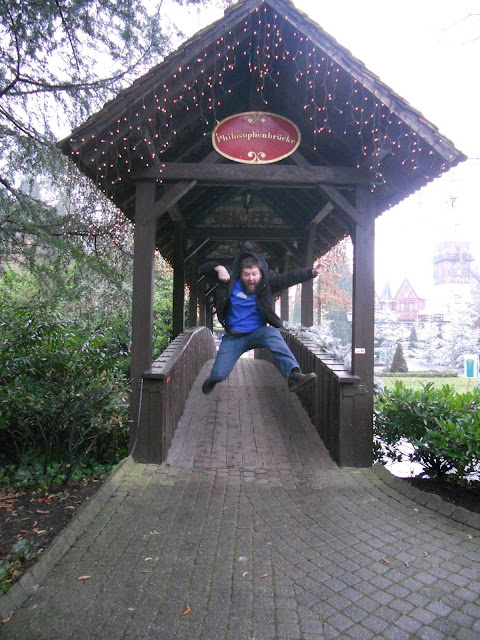 Have you been to the park? What'd we miss? Should we go back in the summer?
I think, we must.

For more pics of the park, rides, and our apparent madness, onto Facebook!
And for more theme park loving, including Disneyland Paris, click on the Disneyland tab.

Great pics and looks like much fun! I live near the Europa Park and I am the owner oft the biggest private Fansite: www.park-rust.de. All informations are in German but offering a lot of pics and videos I think a visit is worth. Have a look and see you in summer season!

Thanks for the comment Dominik! We really enjoyed our time at the park (clearly) and you have an incredible site for planning your adventure. Thanks for sharing.