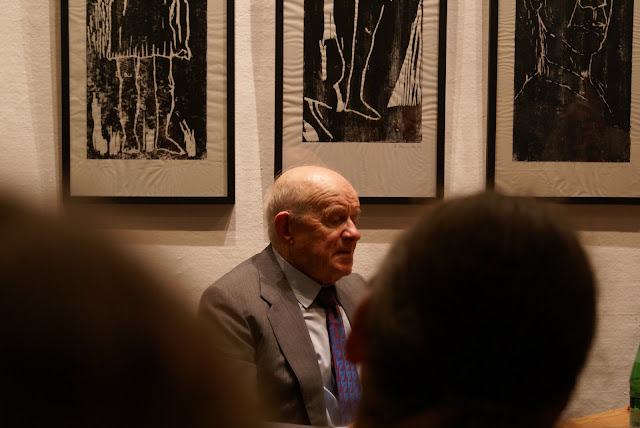 One of the many nice things about Berlin is the bi-monthly magazine Zitty. It has articles about interesting things happening in Berlin as well as listings for all events that are within that issue's two week time frame.

I was scrolling through the listings and noticed that there was going to be a reading from a new book entitled Der Dachdecker von Auschwitz-Birkenau, or in English The Roofer from Auschwitz-Birkenau, which is an auto-biography from one of the ever shrinking pool of Holocaust survivors.

I started thinking if I had ever met a Holocaust survivor and actually heard their story in person, and I realized I never had. After all my years of studying German, where in turn you learn quite a bit about the Holocaust, I had never met someone who had witnessed the atrocities of the Nazi regime. Not only would I be able to hear the story, but meet a world renowned German specialist in the Holocaust, Prof. Wolfgang Benz would also be there leading a discussion with the author Mordechai Ciechanower.

Ebe decided that she was going to stay home and work on our pictures, seeing as it would be a little difficult for her to follow in German. When the time came I bundled myself up and walked into the frigid Berlin night to try and find the Brecht-Haus (former place of residence of the famous writer Bertolt Brecht) all by my lonesome. About twenty minutes later, and a few wrong turns from the station, I finally arrived to the warm inviting chatter of the Brecht-Haus.

I was there a little early so I had my choice of seats, but by the time the reading began there wasn't a space left in the house. It started by Prof. Benz introducing Mordechai, who was a small man with a weathered face, but no different looking than any one's grandpa. You never would have guessed what he went through just by looking at him, except for his inmate number tattooed on his left forearm.

Mordechai has lived quite an amazing life. His book not only tells of his time in the camps, but also of his youth and how he came to Israel after surviving the camps. Benz started by asking Mordechai about how he came to Israel after the war, as Britain wasn't allowing refugees in at the time. Mordechai ended up joining the British army right after the war, was sent to the Middle East and then hopped on a bus bound for Israel where he settled and has a family! Pretty wild.

It was quite an amazing experience to hear him speak of his lost youth in the camps. I'll share a couple of the stories which I found quite compelling. As an un-skilled prisoner in Auschwitz, your chance of survival was slim to none. Mordechai went into the camps as an unskilled worker, but when opportunity presented itself, in the form of a missing roofer, Mordechai jumped into his place and learned the ropes as fast as he could. Being a roofer in the camp entitled Mordechai to more food and freedom of movement than most prisoners, but he was still grossly malnourished.

There was also a time in the camp when Mordechai became separated from his father and learned that his father had fallen ill and died. It was awful for Mordechai, but nowhere near as awful when his sisters and mother were torn away from him and sent to the gas chambers.

After finally being liberated, Mordechai heard a rumor that his father was still alive. After becoming healthy enough, Mordechai traveled back to Poland where his father was also looking for loved ones! Both father and son survived. His father lived to be over 90 years old!

It was an amazing experience, and I'm glad I decided to venture out and see if my knowledge of German would allow me to understand. Thanks to Mordechai for writing his life story down and sharing it with us.

Ian - Thank you for sharing your experience at the Brecht-Haus. I haven't personally met a Holocaust survivor but I have heard some Nazi Camp Survivors speak before in a lecture at school and was impressed with their ability to move forward in life, after having such a terrible experience. One of my favorite documentaries is about a middle school in Tennessee, "Paper Clips" about honoring Holocaust survivors. Again, thanx for sharing!
Love,
~ cheryl