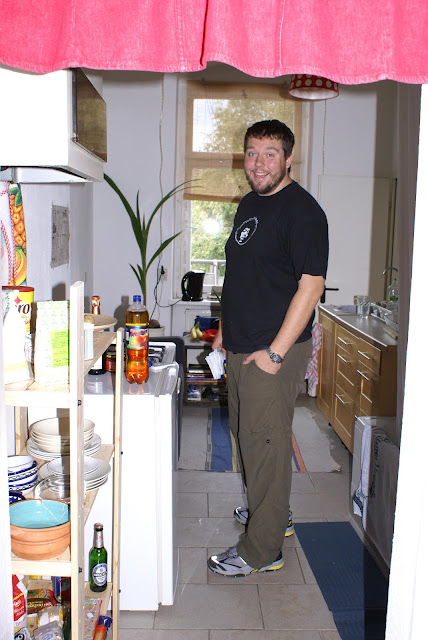 So we have an apartment....for a week. It actually might lead into a longer arrangement, but we mostly just needed to get out of the hostel! And the flat is great. In Prenzlauer Berg, one of the current hippest section of town, it is on a quiet street with a modern facade and an amazing historic interior. It is basically a studio with a really funky layout (the shower is in the Kitchen) but is an altbau (which means it has original wood floors, high ceilings and huge original windows). It also has a cool little balcony with some plants that we are planning on eating breakfast from and looking at the very tip of the Fernseturm (famous TV tower). There are also a load of trendy bars and comfy bakeries all around. There is also a shower in the kitchen - but hey! It adds character.

We just got back from our 1st serious grocery shopping since we now have a kitchen & it was an adventure. Leeann had been nice enough to give us a crash course in the Netherlands, but we still have a lot to learn. We walked in through a turnstile only to immediately realize that carts were on the other side. To get the carts you need to put a refundable 20 cents or so in the cart.

Once we had managed that obstacle we tried to return some bottles. After wandering around for a while we were directed to the machine over by the drinks and tried to read the directions. An older women asked if she could go quick so we dumbly watched her as she neatly slid the bottles into a conveyor belt & the machine computed their worth then spit out a receipt to be redeemed at check-out.

Next was trying to remember the word for a dozen different foods and connect that word with the price listed and then translate grams into ounces. To check out we had no grocery bag so we had to buy 2 plastic bags to carry our goods which were promptly pushed past the scanner and needed to be quickly put into the bags which we had just purchased so the next person could go. An adventure.

And of course we forgot to redeem the coupon for the returned bottles. Next time...

As for now, we are reading in front of the beautiful windows looking over a peaceful neighborhood in Berlin and contemplating making nachos. What can I say? Life is good.


To hear more about our epic failures and successes in Berlin real estate,
"What Moving 6 times in a Year has Taught Me"
Posted by Unknown at 15:40

I love the grocery story - it is cool that they charge you for bags and have a recycling program for bottles. Also I remember you telling me that you looked forward to regularly needing to shop, as there was not much storage in European kitchens - so at least you'll be able to get your deposit money back soon. :>)