What Moving 6 times in a Year has Taught Me

Yes - we have really moved 6 times within Berlin this year (8 if you count our 2 temporary stays on friend's couches - one planned, one not) . Why? I think the prominent point is that we're crazy. 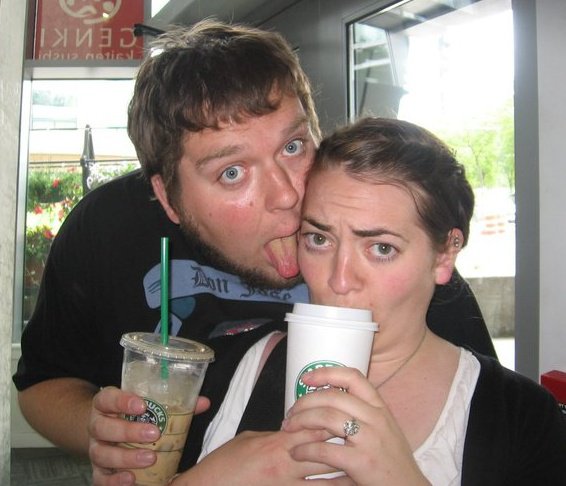 The other point is that we don't know have any idea what we are doing with our lives and what exactly we are doing back in Berlin. We followed our hearts back over the ocean, but our minds haven't really made themselves up what this whole adventure is about. Let's go through the whole melodrama, shall we? 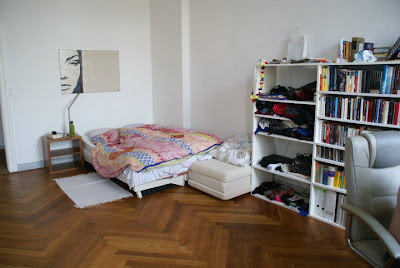 1. After staying on a friend's couch upon arrival, we signed on to be an 2. untermieter (subleter) for just over one month. It was a lovely apartment in Kreuzberg that we loved. Swooning over being back in Berlin, Christmas, a trip to Krakow, we didn't get our ass in gear to look for the next place until the lease was almost up. Video of apartment #2.

3. We settled for a place in Prenzlauerberg, the very first neighborhood we lived in for 2007. It was a tiny studio, and frankly, not ideal. But again it was just for a month, until we got our lives in order. Video of apartment #3.

4. We started searching slightly earlier this time and found the best apartment we have had so far. No cattle 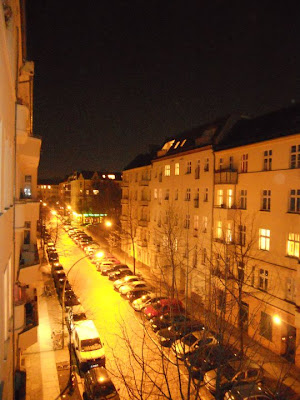 call of hoards of possible sublettors stampeding the place, we met one-on-one with a very pleasant Frenchie. Annabelle's place was in Freidrichshain, our favorite kiez (aka neighborhood). Postcards and random art stuck to the wall with a balcony over the busy street - we were in love. A blissful 3 months we spent there, probably about as happy as we have ever been in Berlin. Video of apartment #4. 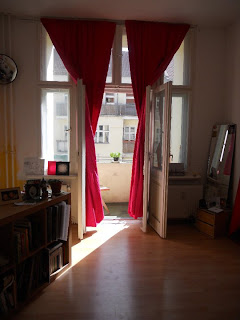 It was the calm before the storm.

Discussions about our future had finally come about. I wondered what exactly we were doing. Ian was surprised I was thinking about the future.
Hello Ian! I am your wife, ebe, who plans every aspect of her day including "fun time". Yes, I have thoughts about our long-term future!

We decided to try really hard to find one long term sublet, like we had in our stay in 2007-2008. Multitudes of appointments proved entirely disappointing as we were not the first ones there, or they chose a single rather than a couple. We were thoroughly discouraged, and desperate.

This is when we stumbled upon a scam. I cannot believe it is still painful to talk about it. Let's leave it at this post, "Getting Scammed in Germany".

5. This brought us to  again call upon the generosity of our friends and we stayed on another friend's couch for 2 days as we frantically looked for somewhere- ANYWHERE- to hang our hat. 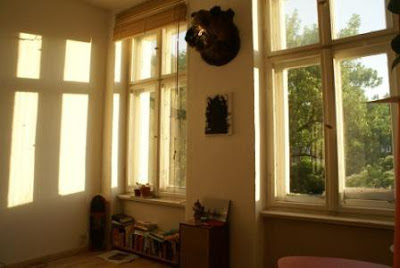 6. Our nerves a wreck, we came upon an artist who usually rented his studio out just day-to-day, but had it free till the end of the month. Nervously, we signed on and were relieved to find we were the only ones moving in on move-in day. It featured the best kitchen we have ever had in Berlin (roomy, washing machine, dishwasher!), tiniest bathroom, and funniest landlord. He was ridiculous, living in his art space in the back yard and  coming over just before midnight sometimes to chat or pick up cake making supplies. Artists...Honestly, we had a great time and found a surprising love for the quiet yet quirky neighborhood of Weissensee. Video of apartment 6.

We immediately began looking for our next abode. We met a leisurely leaser again in Friedrichshain in one of the most happening streets of the hood. It would be the most expensive apartment, but it would be until January and it was so nice! These dreams would later be dashed as we were turned down by his apartment agency as possible renters. For what reason? Three words - "Wir wünschen nicht". Cruelly, "We do not want". 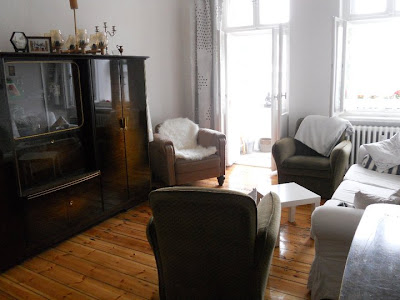 Our possible subleasor was not able to reach the agency about any clearer reason, and was having trouble deciding how he wanted to play this. To be honest, many places do not officially allow for sublets. Many more tell people they can in their contract, but then offer vague reasons why they won't allow it later. Ian & I waited for him to make a decision - can we stay or can't we- as he hemmed and hawed. A week before we had to move, he hadn't made up his mind, but we had. Wer hat die Wahl, hat die Qual...

We got proactive and found a place in 7. Wedding that was the nicest apartment we had so far with all the extras of washing machine, dishwasher, and gorgeous wood floors. She had been stilted by her possible subletter so it felt like karma bringing us together. Happily we put down some roots for another 3 months. Video of apartment #7.(Very sad, the battery was low & this video is poor quality because of it. Bad Porters! Take our word it was a lovely apartment). 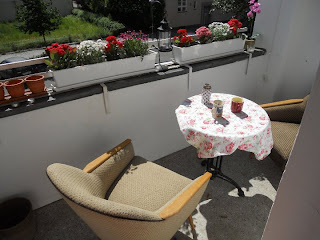 8. Now it is September and we are in our latest abode in Neukölln. Formerly under the flight path, the area is becoming increasingly popular, specifically with Americans. This has not (so far) made a dent in the amount of Turks drinking tea on the streets and the döner shops on every corner. One of the best things about our new home is the balcony over the cemetery (sounds morbid, but most cemeteries in Berlin aren't active anymore and are more like parks). We also both finally have bikes and easy access to Templehof park which is offering a world of enjoyment. I think we have shook off most of our fear of humanity (especially since they caught the scamming bastard) and I hope we have learned a bit about renting in Berlin, protecting ourselves better, and what one  should think about when making big life altering decisions.

Be careful out there kids. It can be a big bad world.

Even more moving! We have finally settled down and have our own place (that was even featured on House Hunters International: Seattle to Berlin!), but there was one temporary move in between, so tack 2 more places onto this list :/

Good advice. Every so often we get itchy feet and want to move. It can be an expensive business and if we kept moving on a whim we'd soon run out of money!