As summer draws to a close, I feel like


"Wait! But I didn't have all the summer fun I wanted to! The outdoor movies, swimming at badeschiff, and bike riding are still on the to do list!" 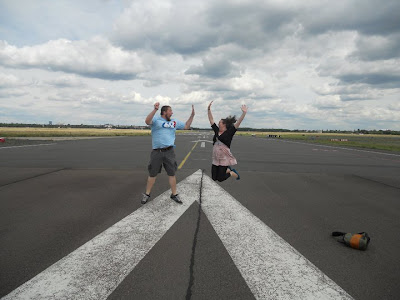 The seasons don't seem to care, but we are fighting back. Having just moved to Neukoelln (post about our near constant moving coming soon), and both of us finally having bikes, it seemed the time was right for an epic bike ride. Mind you, it's been since we were last in Berlin that I rode a bike (approx. 3 yrs ago).

Nervously, I saddled up and we were immediately off on a blissful ride down a trail and out into the openness of Templehof. Recently an airport, it has been shut down and is now a truly enormous park. We had walked through a tiny portion of it with Ian's dad & took some pics, but the park is made for cruising around by bike. It felt amazing to be riding on tarmac that once sent planes into the air and watch the Fernsehturm change in appearance in the distance.

We stopped at a pop & lock competition that was being poorly run by both the Germans and the French. The sun beating down, I ignored the ineptness happening on stage and smiled.

After that we made our way to one of our favorites, the Hühnerhaus. This is the best chicken I have ever tasted. We take everyone here.


BUT- We were happily distracted on our way to Görlitzer Park by a place we've been meaning to try, "Angry Chicken". The name in itself is reason to go, but we had recently heard some good reviews & we were literally there standing in front of it. Fun names like "sexy chicken" and "furious chicken" outline a basic but complete menu of fried chicken with different sauces. 6 pieces are 3.50 euro which is a little pricy, but easy enough that we got 2 baskets of different flavors. The "friendly chicken" is the classic and where it didn't want for moistness or perfect skin, it was in desperate need of a little S&P (salt & pepper). Push it real good! The "so so angry chicken" was doused in Korean spiced hot sauce that brought on the kind of slow burn that is sadly missing in the German flavor profile. Fingers covered in goo, napkins were little help. Luckily, the sweet counter worker let us wash our hands at the sink & filled up our water bottle. Customer service in Germany!? Shocked.


We decided to proceed with the original plan in a half order and snagged some more delicious chicken on our way into the park. Finding a shady spot we dropped the bikes and got busy with some more chicken. I had apparently picked an inopportune place to put my bike as one of the drug dealers of the park (there are dozens- but have no fear, the worst thing they are going to do to you is try to sell you some weed) came over and said "Hello." as he reached under my bike. WTF? He pulled a cigarette outta the pack he had just picked up and threw it on another random spot on the ground. Random indeed.


We enjoyed the scenery of a few young kids copiously prost-ing each other, a family on a picnic, and the many bikes and walkers streaming by, but the drug dealers continued to be the main group of interest (surprise- right?). A few congregated on the bench in front of us and were chatting until an older black woman (oh yeah- almost all the drug dealers are African. Bummer stereotype being right eh?) walked up to them yelling "Ausländer". For those of you who don't know German or didn't watch that creepy Children of the Corn

, ausländer means foreigner. She was apparently trying to get the group to spread out a bit and get someone she didn't know to get out. The group was further interrupted by a Bulgarian and his girlfriend joining the group. He was familiar with one of them, and generously offered a refreshment in a Fanta bottle to the rest of his compatriots. He described the drink, Rakia, (apparently a Bulgarian brandy) as the national drink.

As fascinating as all the happenings were, we were starting to feel this long bike ride. Turning for home, we traded the idyllic park riding for street riding. Amazing how fast riding a bike comes back, but I was definitely a little out of my element as we swept around cars  and narrowly avoided crashing into many jaywalkers.

A Turkish market & Netto run later, we were finally back in our new home. Lugging the goods 4 floors up, I felt glad to be home just a little worse for wear (my butt is so not sure about bicycle seats) and out  & out thrilled to have re-claimed that little bit of summer.