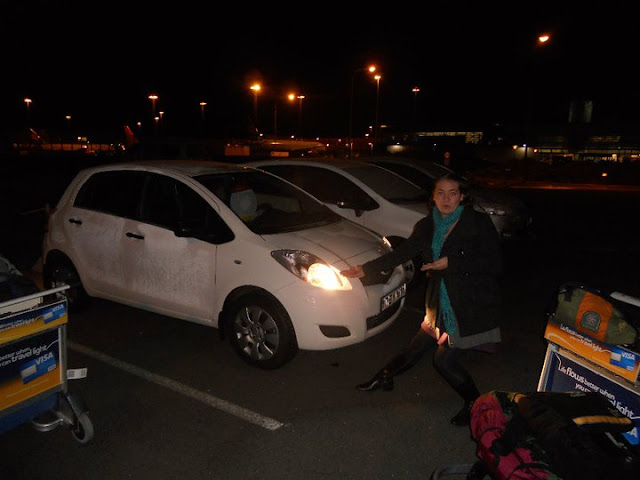 Well, we had a great time in Iceland until we had to head to the airport...

We were running a bit behind schedule, but nothing too crazy when we pulled over to fuel up the car.  All of a sudden our bank cards, which had been working the entire time, decided to leave us in a lurch and not allow us to fill up the tank on the rental.  Shit.  We would have to pay a fee for not filling up the tank...

Then we finally got to the Hertz return center and a Polish guy came out to inspect the car.  He immediately went to the passenger side door with his "torch" and found a tiny tear in the door seem.  "Wind damage," he said in his broken English.  We were completely astounded, as we hadn't done any damage to the automobile.  We had used it for just 24 hours! But the wind outside the resort was fierce and the car was uncovered. I wonder if this minor damage happens all the time. We were so worried that we would miss our flight to Amsterdam that we rushed the process and had him drop us off at the airport where we finished the paper work.

Long story short, we get an email from Hertz's very own Magnus, an oaf of a man with an ill fitting suit, who informs us that we'll be charged just shy of $900 for this damage.  I must say that again, in case you think I mistyped that number, 900!  Nine-hundred effing dollars!

Our trip has been absolutely amazing so far, but this has definitely put a damper on the mood.  The money has already been taken out of our account, but we're gonna try and fight this.  If anyone has any tips, besides blowing up Iceland, Ebe and I are both all ears.

I (ebe) was a bit beside myself when this happened. I freaked out - hard. I let it really bum me out for a while, and frantically worked with my mum across the ocean to figure out what we could do. This was our first time renting & we learned a lot about car rental, and that we had done a lot wrong.

We had shot ourselves in the foot in several ways including signing off on the car being returned without settling the damage dispute. We had accepted a verbal "Well see what happens.." which is clearly not a good idea.

We fought the charges through our debit card company, saying they weren't authorized - which was true. When the estimate was sent to us, they politely asked if we would sign the papers and turn them back in and we politely wrote them back that they could go F*%$ themselves. (Not really, we tried to explain our case). BECU, our debit card company, accepted our claim and reversed the charges. We followed up by sending a formal complaint to Hertz (the Rental company) and waited for action....and waited, and waited. For 6 months we were on pins and needles thinking any day now we would receive a letter or have the money withdrawn again. 2 years later, I assume we are in the clear. This was a stressful experience and we learned a lot. I just wish we didn;t have to learn it the hard way.
Posted by Unknown at 15:02