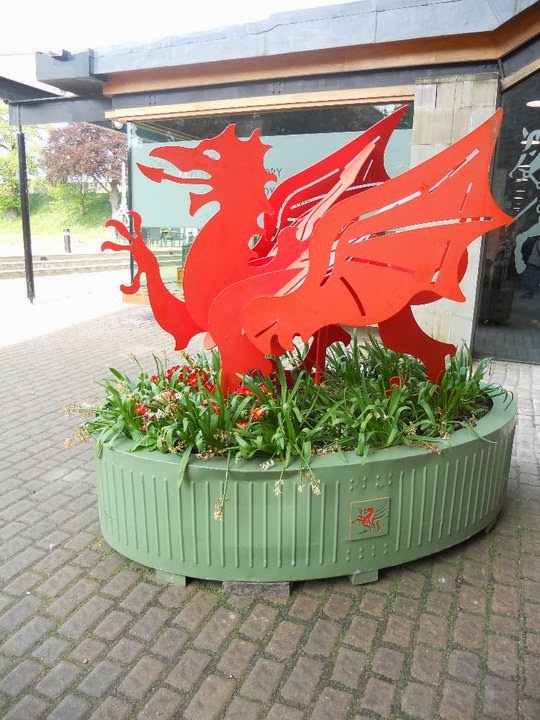 With the whole getting conned thing & looking for housing, we kinda left off on our UK adventure. We did manage to showcase Cambridge, practiced the English accent, cheered on our favorite horses at the track and showed some of our favorite pictures in London, but we have yet to talk about our final destination- Cardiff.


Unlike our trip to England in 2007, we wanted to see more of the UK than just London. With limited time & resources, the easiest option was to get ourselves to Wales. We took off that morning with plenty of time...we thought. After 5 trains- yes 5- went by that weren't for us, we started getting worried. As we hit unexplained stop mid-station after unexplained stop mid-station in the tube we positioned ourselves to run. As we exited the train we attempted to use the machine to claim our ticket. 10 min later, it kept claiming a random error message. Now in a  total panic, we sprinted to the information center on the other side of Paddington Station. I got in line while Ian tried to claim the tickets from another machine. 5 min later- success! Ian had the tickets & we raced to the departure board to find which platform we should be sprinting for. 2 min before departure- no train. We stood in another line to ask at information. The man kindly explained the train would have left already (yeah right) and we would need to go to the ticket desk. FRUSTRATION.

Now sweating from our multiple sprints and anxiety, we waited in line once again. As we approached the desk, Ian told me everything would be ok. After listening to our story, the agent told us the only option was to buy new tickets, 36 quid each. My jaw dropped. Urgently we explained the difficulties (and wished the Engs could copy whatever the Germans do in transportation). After much pleading, he went to speak with a manger. Hopeless, we discussed our options. Refund? Pay? I felt sick.

He came back with an answer- they would adjust out tickets and we would be allowed to take the next train. I couldn't believe it. Mercy? Now that is something I wouldn't have expected at Deutsche Bahn. All criticism at English transport is forgiven.

After the drama - a 2 hour train ride finally whisked us into Cardiff. Tiny, hardy, and perfect.