It's always hard to complain to friends & family back home about how difficult it it living your dream as an expat. But it is difficult sometimes! Obtaining visas, apartment searches, scams can seriously suck. Lately, we have been dealing altogether too much with the icky stuff.

Everyone knows Ian is the lucky one. Usually I think since I've hitched my cart to his wagon I will be safe in his afterglow. But with all of our recent troubles it is unclear if he has lost his shine, or possibly my bad luck is just rubbing off.

Yesterday, a sign from above came to tell me- nope, you guys don't have bad luck (whew!). It's just you, ebe (damn it).

It has been a lovely spring and Monday was the nicest day so far at about 83 degrees F. We had a great day where we finally found some breathing room with a free book, great lunch, and we found an apartment
(we will write about that when we actually, for real, move into the place. Can't blame us for being nervous).


We decided to go swimming in nearby Weissensee. People lounging around the park, a fountain in the middle of the lake, boat rentals, happy dogs....Summer! All this positivity was dashed as I put my first foot in the lake. Something stabbed my foot. Startled, I sat down -plunk!- in the water as the many curious onlookers wondered what the hell was wrong with me. Ian was also looking at me.

"My foot!" I gasped. "Something stabbed it." Bringing it up for the inspection- yep, blood was gushing out fo a straight puncture into the bottom of my foot. Blood dripped into the suddenly disgusting-seeming lake water. As my foot throbbed, I asked Ian for guidance. German swimmers no longer cared that I had made a little scene and now just wanted me to move so they could get in. I hobbled over to the bank and sat with one damaged foot clenched to my stomach and the other dangling in the water. Ian looked at me helplessly, frozen by the awkwardness of the situation. "I don't know." he said. Stuck with a still bleeding foot and a struck-dumb husband I tried to play down the scene. "Just go swim." Thankful to be released, he frolicked into the cooling waters and I watched him swim around as my foot bled and ached.

When he had enough fun in the water world, Ian helped me limp to the blanket as people casually stared.

(I also saw later my ass had been scraped up when I abruptly sat down on the steps so another thing to feel awkward about). 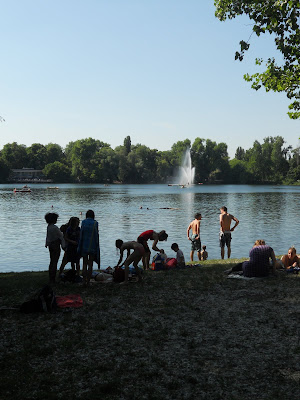 Ian admitted that the swim had been great and I evily wished him Swimmer's ear. We eventually made the long walk back to the bus and all the way home. I opted for no medical care besides neosporin & a band-aid so we will be watching my jaw for signs of stiffness (just joking mum- I'm fine). Today we have to move our bags over to the new place which will be fun with my broke foot.

BUT I did make a positive assessment of our situation. Ian has not lost his luck, it's just me.
Posted by Unknown at 10:45