Adopting a Pet in Berlin

The place is out there. Berlin is a large sprawling city that people complain if they have to come from 2 neighborhoods away. This place would take an hour to get to. Shit. 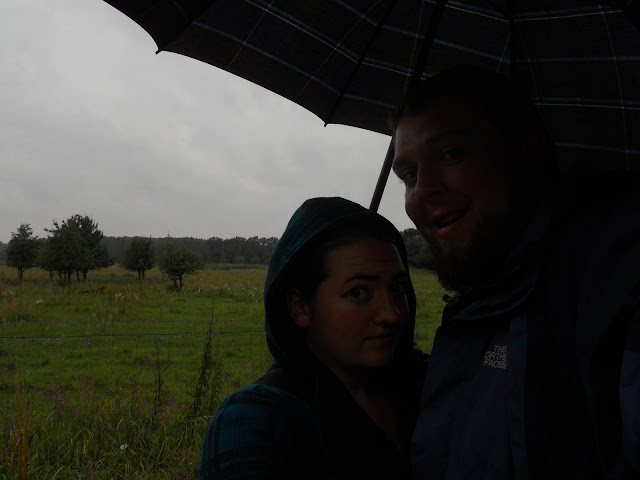 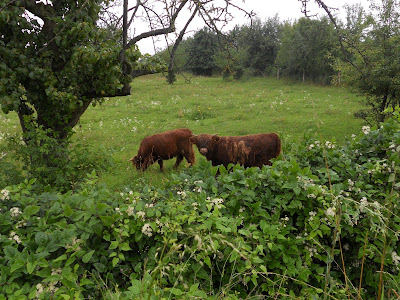 Once we reached the train station after multiple transfers, we took a bus. We were let off in the middle of nowhere...in the rain. Fields. Fresh air. This is Berlin? Holy Cow- Scottish Highland Cattle (that's what my mum says & I am taking her word for it)!

The Tierheim itself was pristine. A hexagonal cement structure, everything was clearly marked with a pond and the dog section in the center. I took one look towards the dogs and Ian said "No! You cannot go in there. We'll leave with a dog." Somewhat reluctantly I turned towards the "Bugs Bunny" section with the rabbits. We entered a long hallway with the right side taken up by rabbits behind glass. Some were brown, some were gray, some were black, some were large, some were itsy bitsy. Nervously we surveyed the scene. Would there be a test or something? 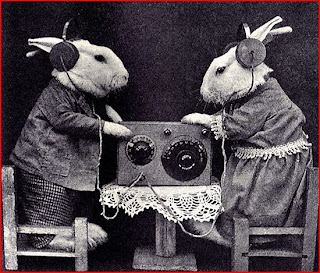 official. She explained the process, we paid 20 euro, and then it was time to pick a bunny. "What should we look for?" Ian asked. "Dunno. A cute one?" This was a tough order, because in case you didn't know, bunnies are crazy adorable. We picked basically at random, a tiny brown male. "He hasn't been castrated yet. You could come back on Friday."

Oh. Yeah. You're cute little guy, but we are not making this trek again. Once again we walked the hall, considering an enormous spotted female named Ruth, a gray male named Boris, and a white and brown spotted guy named Hugo. For no obvious reason, we picked Hugo and re-named him Herr Schmidt. We're clever like that. 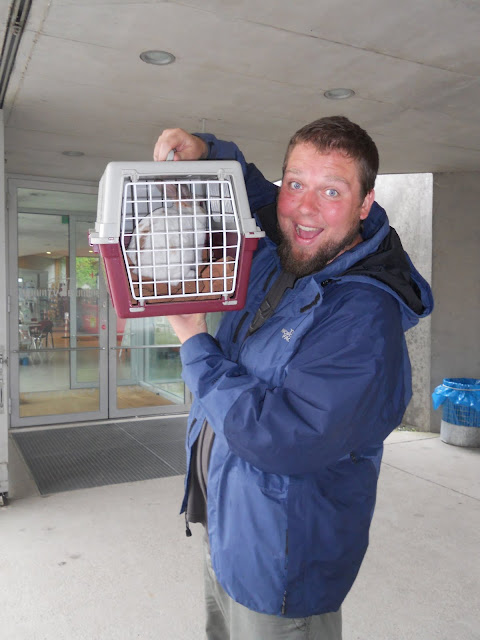 It's been about a month and my life feels back in harmony having a creature to look after. He was pretty unsure about us at first, but is slowly warming. Most bunnies are never going to be big cuddlers (Ian is hoping to beat the odds) but he is really good about being picked up (most of the time) and endures the nightly raping where we put him on the couch with us and pet him. You can see in his eyes he is just pretending to be in another place.

He is also naughty. I am not a fan of the word naughty, it seems to denote an adolescent sense of being bad. But all the rabbit sites (http://www.hopperhome.com/, http://www.myhouserabbit.com/index.php, http://www.thebunnybasics.com/) use the word constantly. The reason is - rabbits are naughty. He looks you in the eye and starts chewing a cord (good-bye Wii cord). We are trying to train him to respect the call of a hawk "Kaaa-ka!", but so far haven't really had success. Looking up behaviors online I noticed google had some interesting suggestions for how I wanted to end the sentence "Why do rabbits..."
Hmmmm. Not exactly the cute bunny things I think about before we got Schmidty. But again, happy to have him making a mess of the place. I already have a truckload of nicknames. The most obvious, Schmidty, is really only once you get to know him well. He's German like that. The others include, Schmidopolis, Schmiderino, the Schmidster, Schmidt-head (Ian's fav), Bubble, BunBun.

He is really adorable... 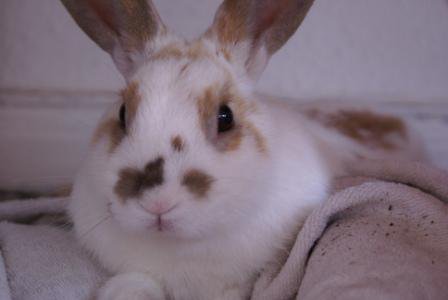 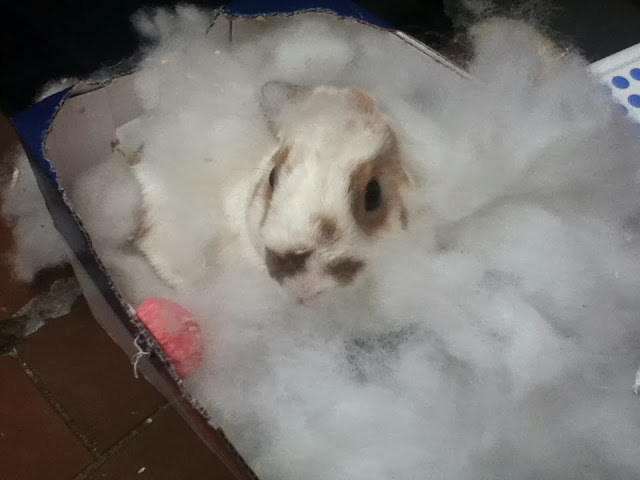 ...and would make a nice stew. Kidding Schmidty!...this time 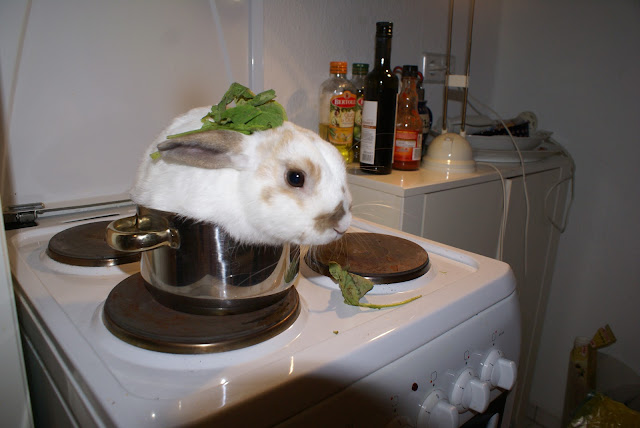 Way too many pics of Mr. Bun


Inspired to get a bun or pet of your own? Or just want to visit the beautiful Tierheim? Or want to volunteer your time?

Info on donating: http://www.tierschutz-berlin.de/spenden-und-helfen.html
Complete info on adopting a pet in Germany
Tierheims in Germany

Miss Bellatrix Badou, cat extraordinaire, is here! My fabulous parents brought her with them halfway around the world.

She & Schmidty are...checking each other out. 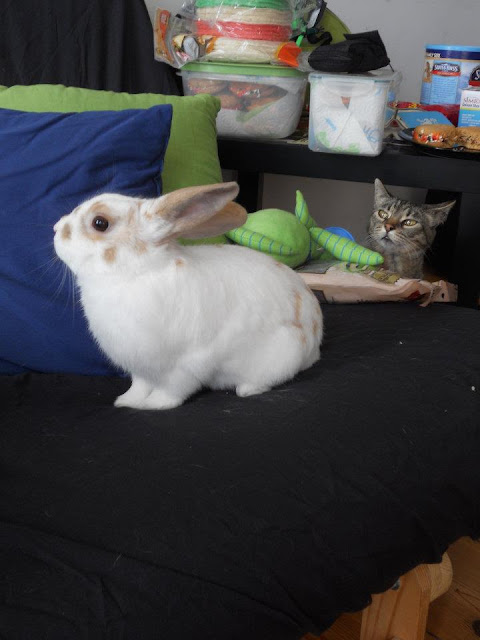 Because bunnies are better in twosomes AND we're crazy - we now have 2 bunnies! Say hello to the lady Marlene Dietrich. 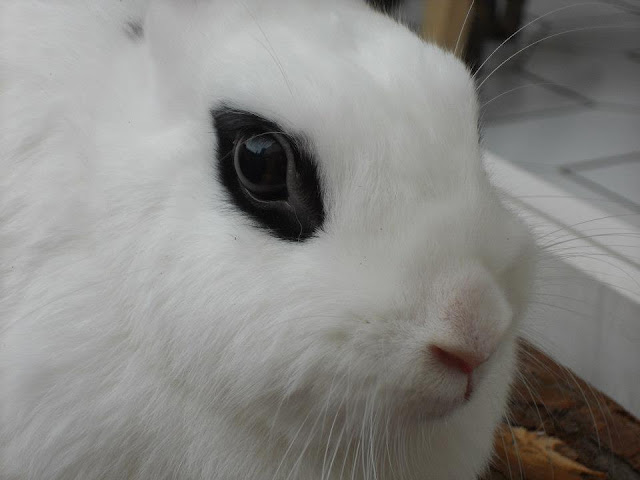 That picture of the bunny on the stove really got my attention! :-) Congrats on your new addition! I have a Tierheim near me, and (since I can't have animals in my apartment) I am thinking of going and volunteering to walk dogs or something!

That's awesome. I am always meaning to sign up for some volunteering...sometime. Enjoy lady!