Observations from the Kita

Ian recently returned to school...not for himself, but to teach (lord help those kids). Everyday, he comes home with hilarious stories from the Kita. 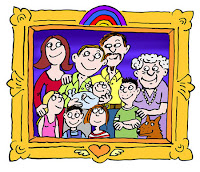 The class has started visiting each of the kid's houses. I don't know why you would want 18 2-3 year olds and their teachers in your house, but apparently it has been nice. On the latest visit, they visited a regenbogenfamilie (I can't get enough of that term- "rainbow family"). An unusual feature of the house is that they had a small pond within their deck, just begging for a kid to fall in. One of Ian's favorites, a somewhat tubby boy named Toby, obliged.

Ian has started napping with the children. They strip down to their undies and lay down for a nap several times a day, and Ian is able to catch some Zzzzs with them. However, they aren't always such good little sleepers. Ian's size & hairiness has proved alarming for children unfamiliar with him and he has startled a few kids trying to sleep. There is also the inevitable acrobatics instead of sleep, and already one who peed her pants... and then reached for Ian to pick her up. Ewww. 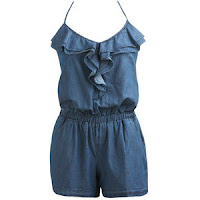 It's not just the kids who give Ian great stories. The head teacher of his class has really been a great supporter of Ian in the school, but her antics can make for ridiculous stories. She's a fan of the adult romper (for men- see picture), which is a tough look to pull off, especially for a plump middle-aged women crawling around on the floor with the kids. This week, she's been sick, which has made lunch a little less appetizing. Not exactly fussy themselves, the kids don't mind when she serves fish by picking it up with her hands before tearing it apart and throwing it in a bowl. Ian does. Ian's hungry.


Some stories, however, are heart-warming. Darius came over to Ian today and told him 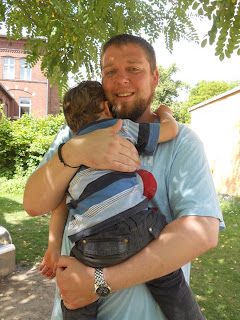 . . . not to mention the grandma-inducing feelings I have . . . cute photo - just please don't name a son Darius!

Sounds way cuter in German, but don't worry mumsy. Not high on our list.