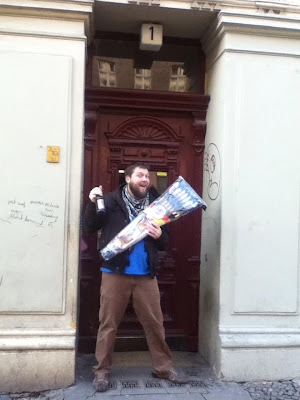 This year, we found out why they call it a bottle rocket.

Remember the first time you lit a firework? I don't. We've never really bought them and while there are a few notable holidays where we did light up the street (hi Yakma & Santa Barabara 4th of Julys), I have extremely limited experience. And it showed.

This year we bought fireworks. Even though this is our 4th New Years Eve in Berlin, this was our first time hosting a small party and I guess we wanted a piece of the madness. We were excited. In Ian's case, very excited.

Silvester in Berlin is always insane. (Telegraph reports). We had talked about going somewhere else for Christmas & NYE...but what could match this?

Last year's celebration on a rooftop in Friedrichshain

I've written about New Years every year (2012, 2011 twice, 2010) and really, really wasn't this year as I have EuropaPark, Switzerland, how to get an emergency passport (don't worry parents - not ours!) and a friend's epic Christmas surprise to write about... but that was before we almost killed ourselves with a firework on the balcony.

Not surprising when you look at our group right? 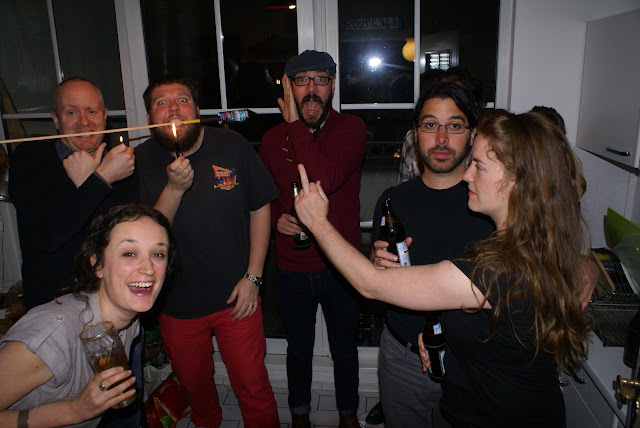 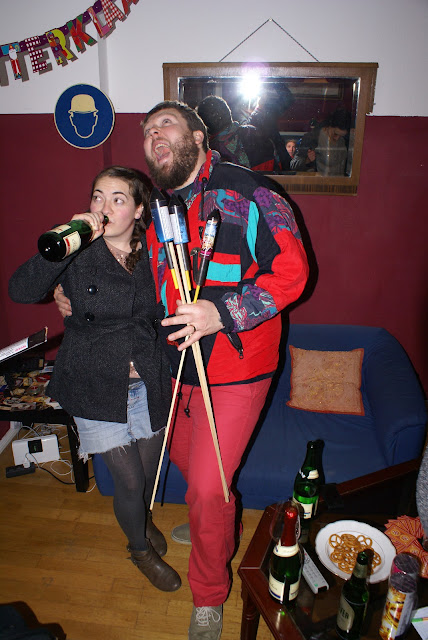 But we're basically smart (enough) people and we had been watching small children light fireworks all week. How could we go wrong?

When our first group of friends arrived that evening, Ian could contain himself no longer. He was ready to blow some shit up. We all went to the back balcony, stuck the rocket in the planter, and lit it.
Then this happened.

Funny what's in a name. Bottle rocket. Apparently there is a reason. That flimsy stick we used to anchor the firework in the plantar actually needs to be free so it can be released as the firecracker launches into the air. Placing the firework in a bottle is ideal for this. Fancy that. I had no idea.

Here are other moments of our ridiculous, and ridiculously fun New Years.

If you are an idiot like us, read something like "How to Shoot Firecrackers and Bottle Rockets" beforehand. We followed up the house party by going to an art collective that was having a free multilevel dance party. We crashed an adult tango party on one level, endlessly searched for a bathroom, and danced til the wee hours. I love Berlin.

It's gonna be a crazy year.

Apparently we'd be far safer sticking to a quiet watching of "Dinner for One" (thanks for the excellent explanation Liv!). But idiots that we are, we're attempting another party with fireworks. Wish us luck. Apparently - we need it.

You make me want to visit Berlin. It would be more interesting for my dad since the last time he lived there when it was East/West. :)

I never flip the bird in photos! and of course I did this time and it's all over the internet now. :P
in other news, you wrote "the first fiends" instead of "friends" and it's the most perfect typo I could ever imagine.
do you guys wanna have a happy hour at the Bird on Friday? I could do with some wings and beer.

Badass Neon Sign. We are constantly speculating about what the city would have been like during that time. And do visit!

Sorry Kyla. I love this picture and didn't even notice you were signing until I took a second look. Personally, I think it really fits the night.

OMG! What are Benny and Kyla doing in your pics and party? Last year they were with me, you totally stole them from my NYE celebration! :P

Frederico - how do you know the illustrious duo? I shouldn't be surprised. They get around. We met Kyla through friends & are strangely from the same hometown - Seattle. Love those two - always a good time.

And for anyone reading the comments - GO READ Frederico & Kyla's blogs! Hilarious.

Oh, I used to date Benny and I met Kyla at the aforementioned NYE party (at Benny's place)! :)

No way! Great combo of funny people. Berlinn can be an awfully small town sometimes.

I heard Berlin can be crazy fun for NYE. That bottle rocket looks pretty dangerous. I don't know much about fireworks and I grew up in Germany but I am sure next time you will be the experts! ;-)

@germanamericanabroad Every year, I can't believe the city can turn into such a cacophony of noise and light. We better be experts next time! It can't go too much worse.