Before I called Europe home, I had only visited cemeteries for funerals. Impersonal, manicured parks... they didn't necessarily inspire return visits, even if thoughts of its residents did. Once we arrived in Berlin, I saw the ancient and modern beauty of family plots, trails of ivy and the essential peacefulness a cemetery offers. Our apartment in Neukölln picturesquely overlooked a nice one.

In 1804, the great comic playwright was the first to be reburied in Père Lachaise, a publicity stunt that gave instant prestige to the new cemetery. 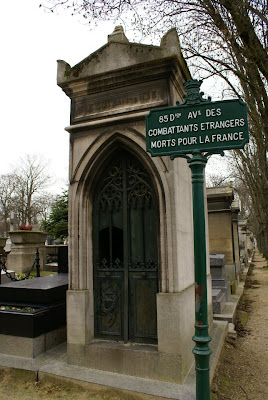 Born in Paris, Molièrewas not of noble blood, but as the son of the king's furniture supervisor, he had connections. The 21-year-old Molière joined a troupe of strolling players, who ranked very low on the social scale, touring the provinces. Twelve long years later, they returned to Paris to perform before Louis XIV. Molière, by now an accomplished comic actor, cracked the king up. He was instantly famous — writing, directing, and often starring in his own works. He satirized rich nobles, hypocritical priests, and quack doctors, creating enemies in high places.
On February 17, 1675, an aging Molière went on stage in the title role of his latest comedy, The Imaginary Invalid. Though ill, he insisted he had to go on, concerned for all the little people. His role was of a hypochondriac who coughs to get sympathy. The deathly ill Molière effectively faked coughing fits...which soon turned to real convulsions. The unaware crowd roared with laughter while his fellow players fretted in the wings.

In the final scene, Molière's character becomes a doctor himself in a mock swearing-in ceremony. The ultimate trouper, Molière finished his final line — "Juro" ("I accept") — and collapsed while coughing blood. The audience laughed hysterically. He died shortly after.

Irony upon irony for the master of satire: Molière — a sick man whose doctors thought he was a hypochondriac — dies playing a well man who is a hypochondriac, succumbing onstage while the audience cheers.
Molière lies next to his friend and fellow writer, La Fontaine (1621–1695), who wrote a popular version of Aesop's Fables.

"We die only once, and for such a long time." — Molière

Since that fateful visit,  I have taken any chance to visit a graveyard. Luckily, Berlin is full of them. (Lonely Planet has a list of Berlin cemeteries I want to visit)

When I heard the Brothers Grimm (or Brüder Grimm) had surprisingly found their final resting place in Berlin I was intrigued. The authors of stories like "Cinderella" (Aschenputtel), "The Frog Prince" (Der Froschkönig), "Hansel and Gretel" (Hänsel und Gretel), "Rapunzel", "Rumpelstiltskin" (Rumpelstilzchen), and "Snow White" (Schneewittchen) - these are the architects of our childhood dreams.

Wikipedia reports on the bros


In 1840, through the efforts of friends such as Bettina von Arnim and von Savigny, who appealed to Frederick William IV of Prussia on behalf of the brothers, they were offered posts at the University of Berlin...

...Wilhelm died of an infection in Berlin in 1859, and Jacob, deeply upset at his brother's death, became increasingly reclusive. He continued work on the dictionary until his own death in 1863.

We headed out to Alter St.-Matthäus-Kirchhof in search of their resting place. 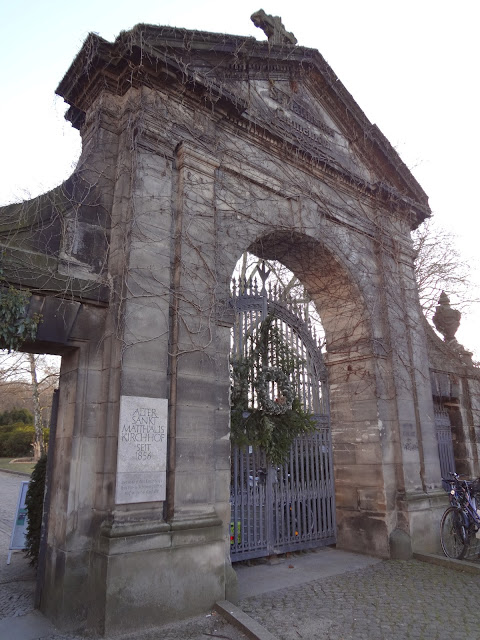 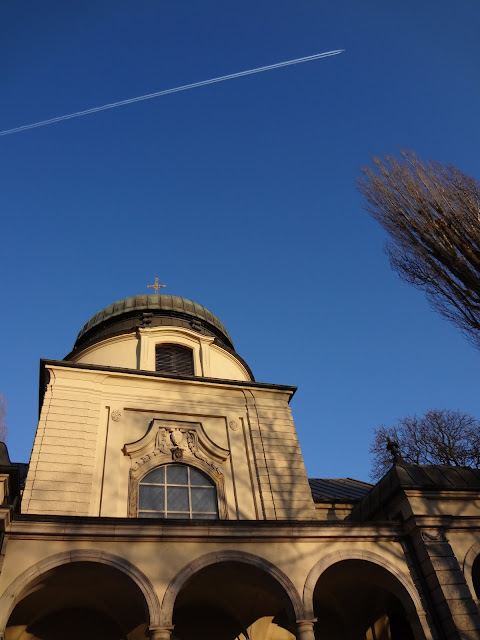 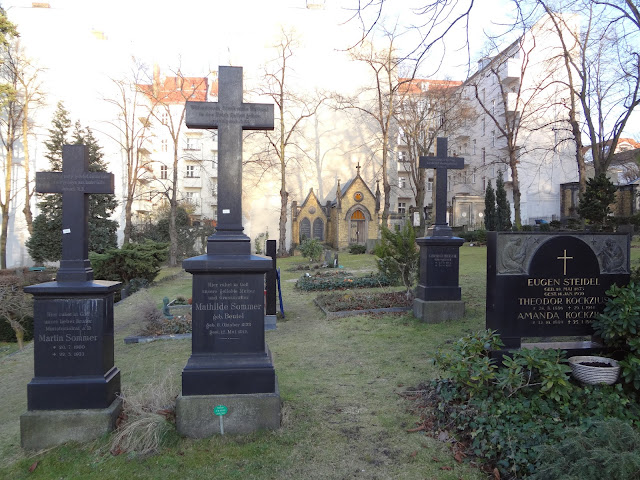 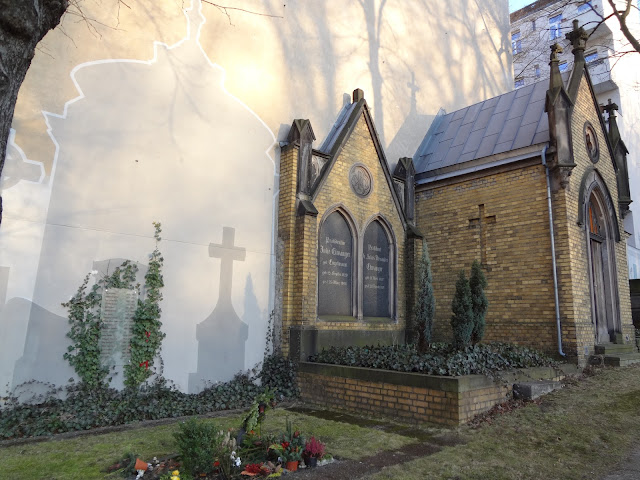 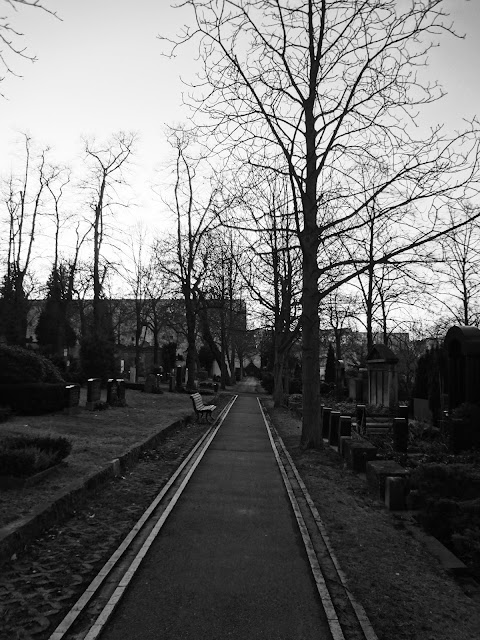 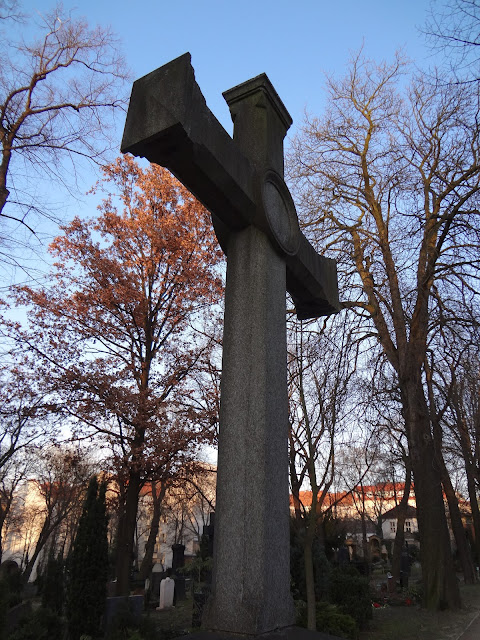 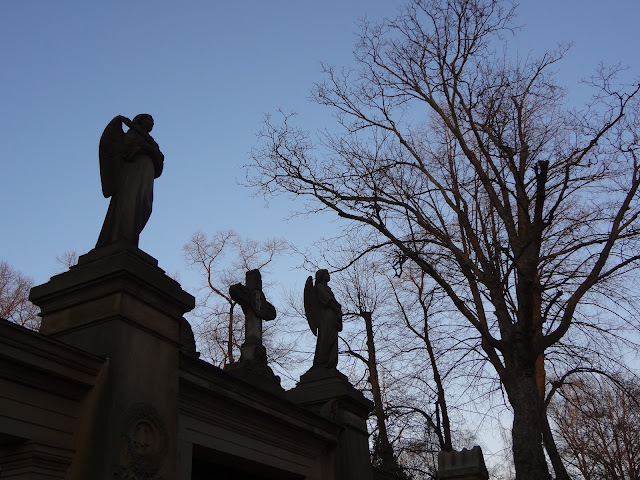 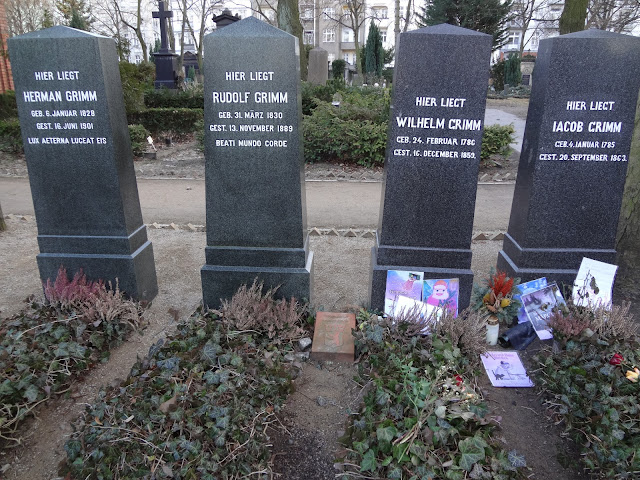 And finally - we found it! Tucked away deep in the middle of the park, if you walk up the main path there is a wall of grave sites that make a wall to follow on your right. Walk along it and just before the wall ends there are 4 graves facing the entrance. Consisting of the brothers and just two of Wilhelm's sons, I was completely underwhelmed by their modest grave site after the more glamorous plots in the cemetery.

For a little bit of lovely, check out the Gleisdreieck Park just a short distance from the cemetery. Approximately 26 acres of park on the former railway sites of Potsdamer freight station, the place has modern touches sprinkled in with its industrial history... like so many beautiful Berlin sites. 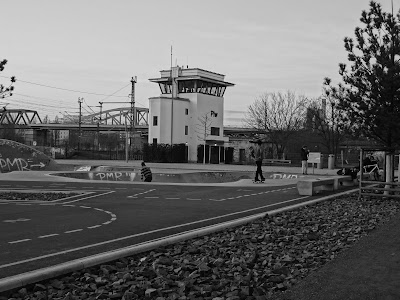 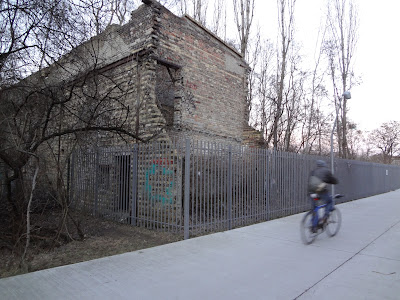 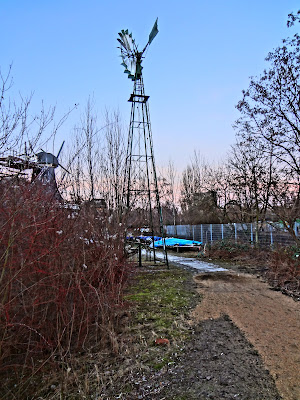 Another fun factoid: both Grimm brothers were on staff here in Berlin at Humboldt University.

Good call Kyla! Somehow I thought I had included that, but missed it. Thanks for adding that important bit.