Vatertag or Männertag is celebrated on Ascension Day, or the much more fun to say "Christi Himmelfahrt". The holiday has been at least partially absorbed by young, not-father guys in an excuse for groups of males to get together and be manly over beers. 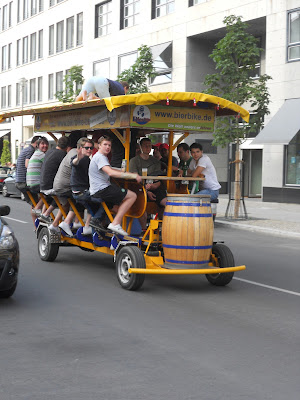 Wikipedia reports on the possible historic path this holiday has taken:


These traditions are probably rooted in Christian Ascension Day's processions to the farmlands, some of which reportedly took on the character of drinking sprees as early as in the 17th century. Similar "gentlemen parties" have also taken place in the streets of urban areas, especially Berlin, since the 19th century.


Where today's adventures are often in combination with wheeled adventures, either by bike, with Bollerwagen, or by beer bike, our Men simply focus on the drinking/outdoorsy element.

Much video was taken, and I tried to cut it down to the least embarrassing parts - quite a challenge.

Following the shenanigans of last  Thursday's event, Sunday brought Mother's Day in both Germany and the USA. Our lovely mommas were on our mind, and we couldn't wait to speak with them. We are only 10 days away from seeing them at this point and excitement was palpable on both sides of the ocean (that's right dear readers, Porterhaus is returning to Seattle for a month! Rent our Berlin flat).

We've been having rambling daydreams about all that we are going to eat/see/drink in Washington, including the 2 weddings we will be back for and a camping trip to Idaho/Montana, but seeing family is number 1 - especially the moms.

The trip is coming up fast, but for now, our daydreams. (Try not to be too wowed by my awesome skills.)

When we are re-united in just over a week we shall...

Happy days everyone !
(we don't exclude anyone at Back to Berlin)
Posted by Unknown at 09:55

I love this post. It made me smile. :D

I love the photo-shopping skills in this post. And I'm afraid of the day we get a beer bike in Nuremberg. It's inevitable...

Ahahah I see that I'm not the only photoshop master in Berlin :P