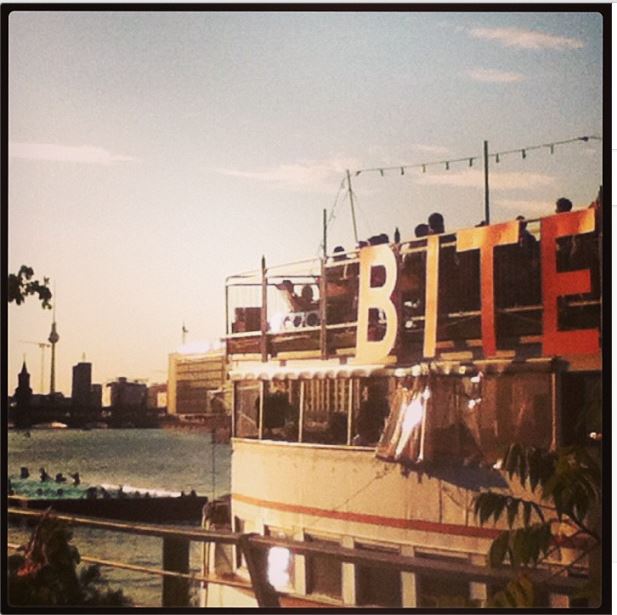 Ian is in the habit of familiarity. If he's cooking dinner I can guess the meal is going to be Mexican and if we are going to eat out in Berlin he has his stable of favorites. I am different.

I am constantly searching out new places to try and imagining what I will order before even get in the door. I was on such a troll on one of my favorite Berlin sites, www.stilinberlin.de, when I came across a recommendation for Berlin Bite Club. Relatively new to the trendy Berlin food scene, Stil in Berlin reported,

"Though it offers some of the same chefs and dishes as you’ll be familiar with from Street Food Thursdays, the vibe is decidedly cooler; there less cute kids running around, for one. Instead, I saw club kids, tattooed beautiful people, DJs on their afternoon off, a distillation of Friedrichshain and Panorama Bar that provided a great contrast to the occasionally intimidating young beach bodies on display at the Badeschiff next door." 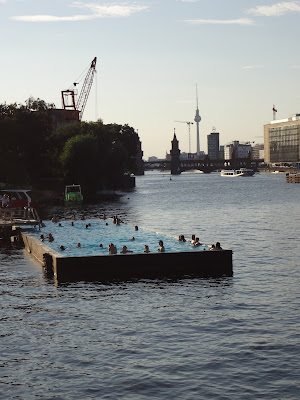 I was sold. And with some pointing at pictures of tacos, burgers, and 3 euro meals Ian was convinced as well.

Picturesquely located on the Spree, the site is sandwiched between fabulous Berlin sites like the Fernsehturm, Oberbaumbrücke, Badeschiff and Molecule man.

You pass by Arena and through a huge pile of stacked railcards to enter.  A small circle of food trucks and stands surround the site with bleachers and a stage at the far end. 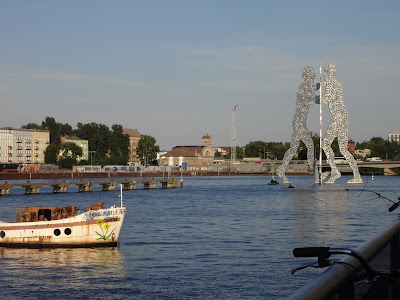 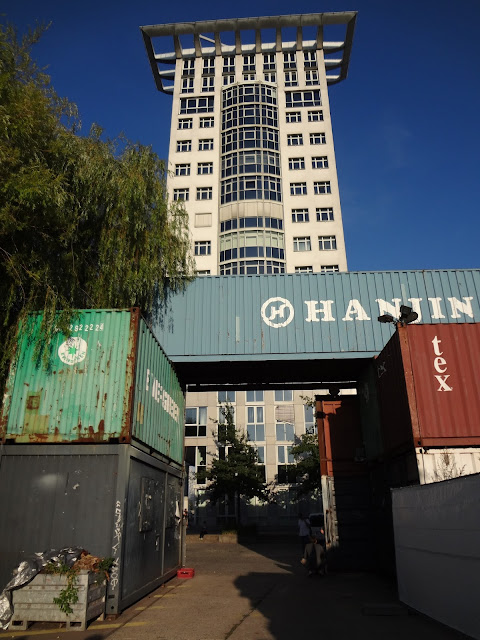 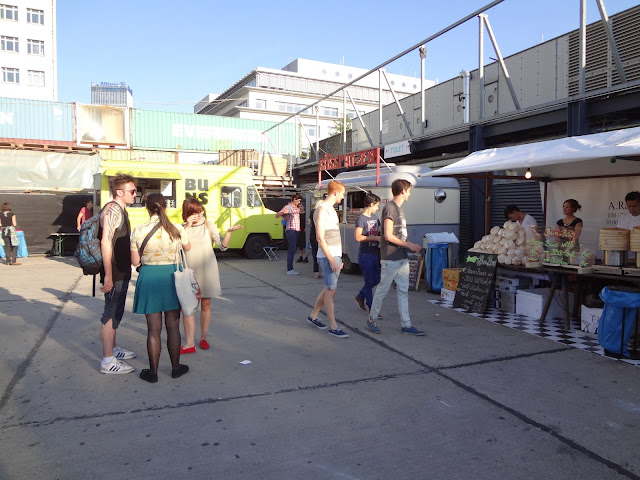 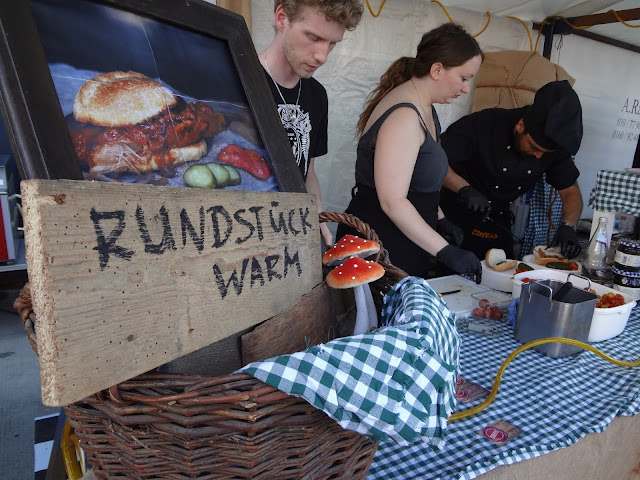 In the river - sits a boat. I've eyed this boat for years. Appearing derelict on the Spree, this was our first time on it and it was whimsically classy. Nail painting was happening, multiple bars were just beginning to hum, and seating was available within the boat and up on top. 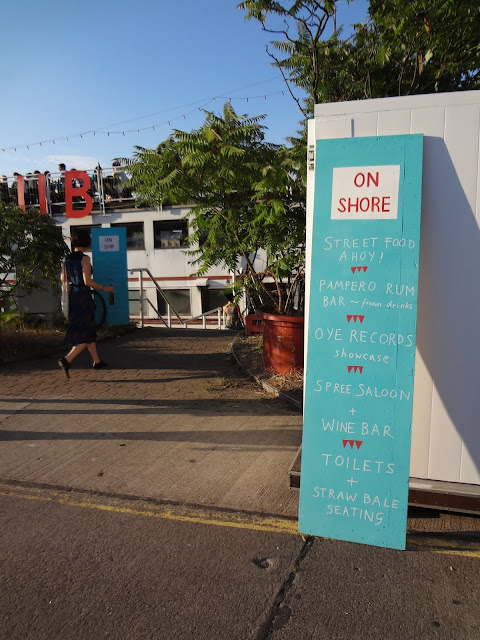 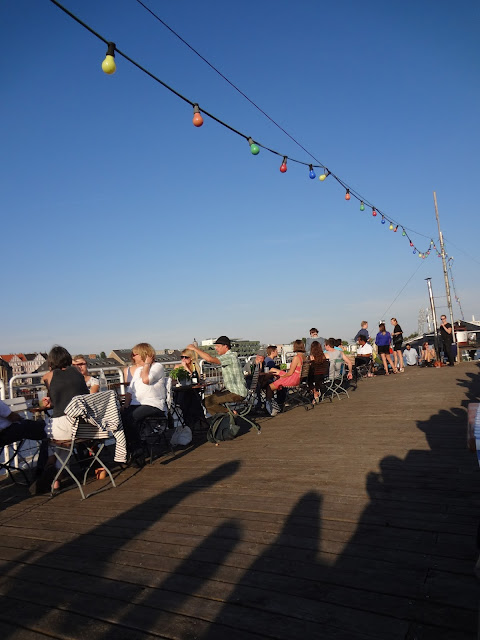 The Food at Berlin's Bite Club

Lets stop messing about and talk about the food.We came right at the opening time of 6pm as we had been warned of crowds and sold-out food. The place was just starting to get going with about 15-20 stands in various states of set-up and just a few visitors milling around. Excellent. They were selling everything from burgers to tacos to big slabs of meat and we were ready to eat.

Ian went for his default favorite food of tacos at Taco Kween and I spied a delectable looking rundstueck for 3.50 at Rundstück Warm.

My hunk of meat was served up by an orderly line of workers, sawing off a huge chunk of meat, adding a juicy pickle and tomatoes, and spooning fresh sauce over the meal. Best 3.50 ever spent? Possibly. It was tangy as the sauce followed the German pallet of sweet not spicy, but not cloyingly so. Not always my favorite as a sauce, it was just right here. Unfortunately, the bees loved it too and were all over it. I tired not to scream like a girl and ate quickly.

Ian didn't fare quite as well. Though we have found a few Mexican places we love and have grown accustomed to making our own bizarre Mexi hybrids at home, Mexican food in Berlin mostly disappoints. Taco Kween was one of those (at least on this day). Ian paid 4.50 for 3 tacos and they were downright pathetic. The tortillas looked ok, but immeaditly fell apart and the meager offerings inside were little comfort. They actually served him the tacos, looked at it, then took some of the filling out! I know there have been issues with items selling out, but damn. This does not stand, man. 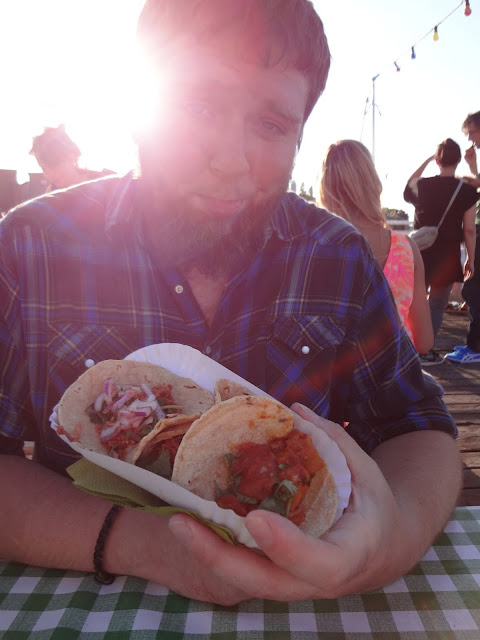 Besides a prevalence of bees and some very sad tacos - we enjoyed.We had to hurry off to another event, but we could definitely spend more time munching through the lines.

Interest sparked by Bite Club, we followed up on something we had been meaning to do all  summer - Eat at Street Food Thursday at the Markthalle IX. Also located in Kreuzberg, this eating event takes place in a beautiful old market hall and hosts what the event generously calls street food.

Again, the options were enticing and varied. Much more fancy than your average doener (our usual street food), there was everything from empanadas to tapas to English pies. The stands here were more permanent than Bite Club with a Kantine providing fancy burgers, a refined wine bar, and a beer stand with Heidenpeters brewed on the premise. 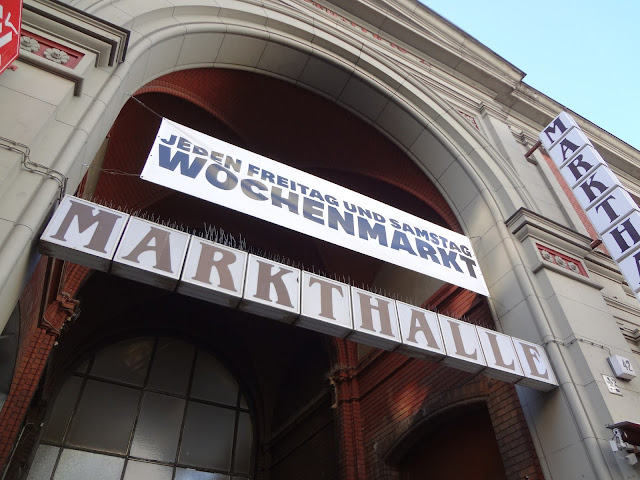 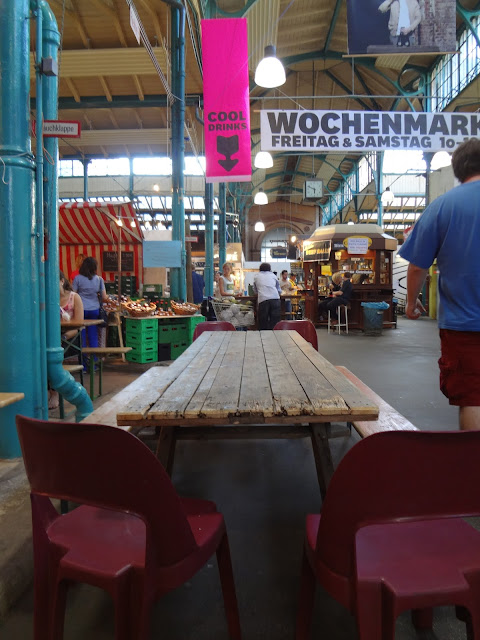 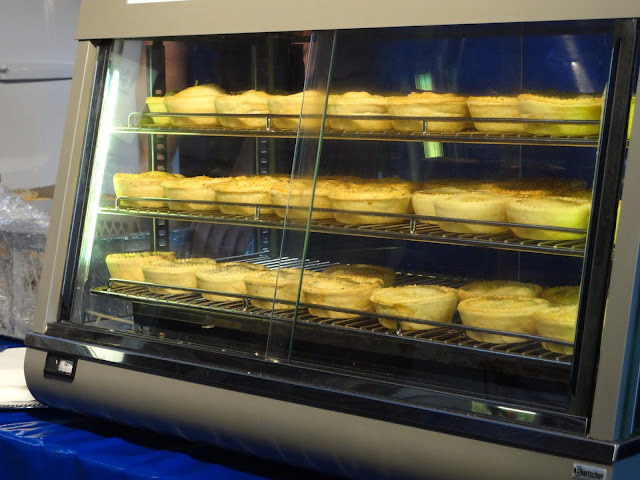 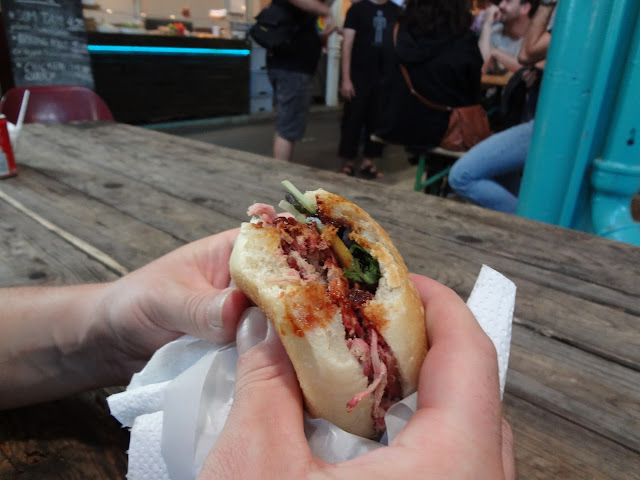 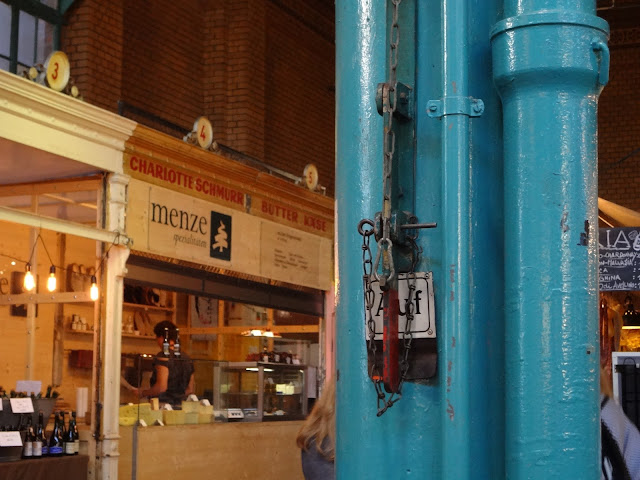 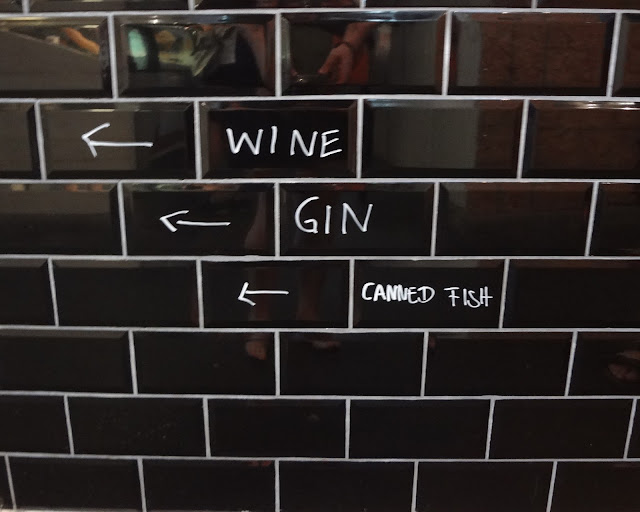 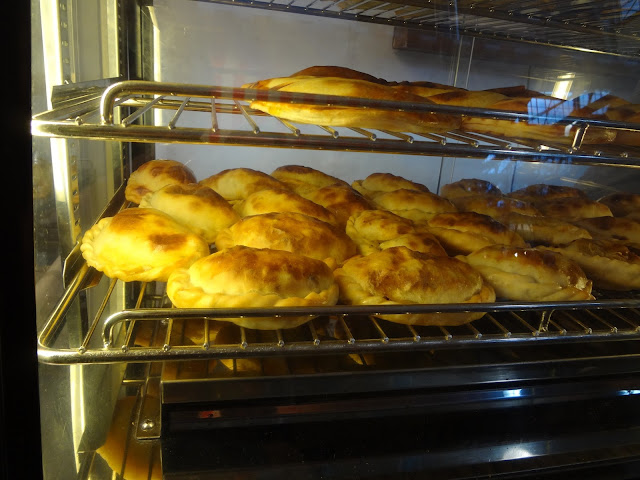 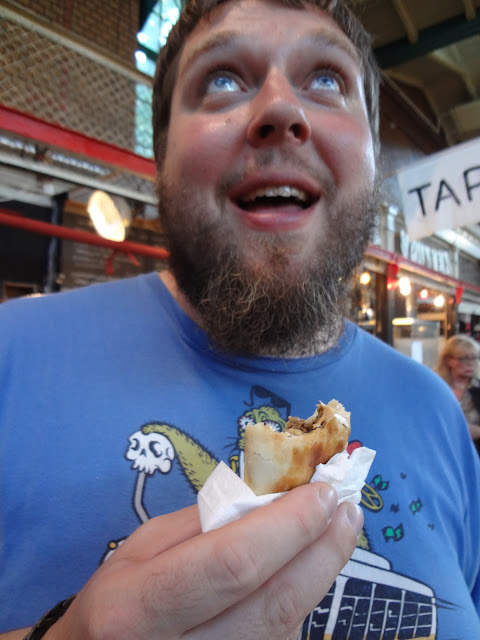 It was so lovely to sit & chat, picking at a little bite here, having a glass of wine there, drinking more than a beer or two.  We eventually nibbled & sipped our way through 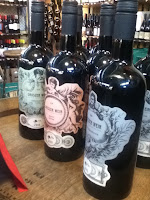 Food Run-Down: The  BBQ has been the talk of the town all summer and lived up to expectations. When we asked for spice, he supplied a little heat and the meat itself was juicy and flavorful with fresh apple slices really setting it apart. The empanada offers surprising heat and was one of the cheapest things available and hearty. I've had the spätzle from this food truck before and it delivers on total cuteness of vehicle and is about as fresh as cheese and pasta can get. If I was feeling daring I'd ask for more fired onions as they are a gift. 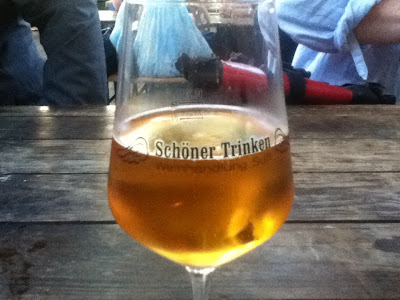 Alcohol Run-Down: Doing up the classy, drinks are served for grown-ups in proper glassware with pfandts (glass deposits) around 3 euro. We daintily tried some wines and picked a favorite. I had some cider that cooled me down in the rapidly heating environment (even as night fell, the influx of people had the place cooking by the end).


But most importantly, the beer was delicious! Slowly, so slowly, microbreweries are clawing their way back from the brink of death in Germany. This includes fine brews like Heidenpeters brewed deeply in the belly of the premise. Three beers were on offer this night: a pale ale, and Indian ale, and a Chili Ale. Unique, delicious, and possibly the find of the night.

We saw them again at the craft brews festival and were delighted to try more of their offerings. 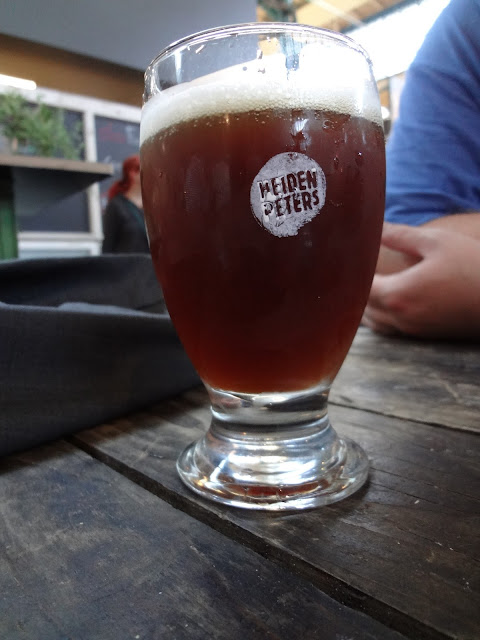 While there are many, many things we would and could eat in the coming weeks, the only thing that we really missed was a decadent looking cheesecake. Inches of perfectly smooth and seductive cake perched atop a heavenly crust...we arrived too late to partake in that magic.

We left the growing crowds to go chat down by the river. The city was simply at it's prettiest and an impromptu fireworks show seemed to seal in how truly special a "nothing big" night in the city can be. 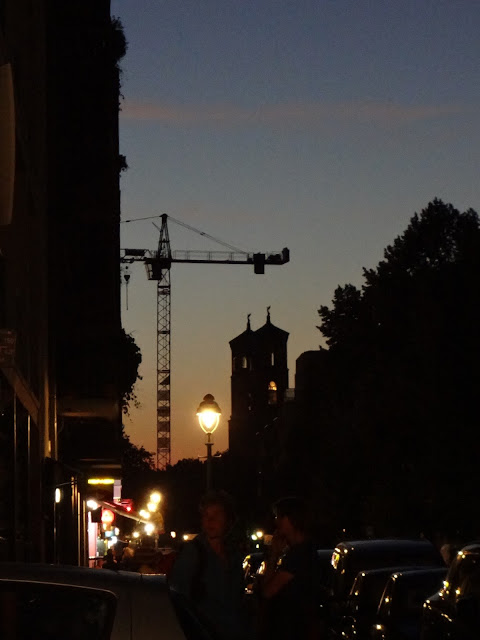 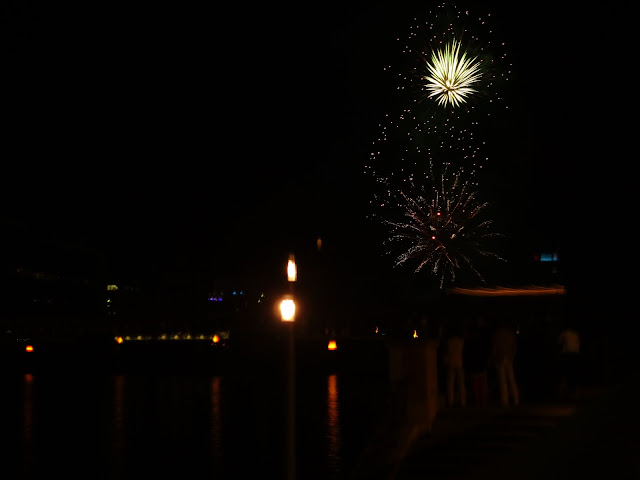 Full info on visiting Markthalle IX on my about.com post:

More pictures of the foodiness in Berlin on our Facebook page

Isn't Heidenpeters the best? I really want to go there on a non-Street Food day, as my wait in line was something like 10 minutes, and I can imagine it's a cozier and less packed atmosphere in the afternoons.

@Natalye It is pretty much the greatest local beer offering we've found - delicious!

That is a great idea to go on a non-Street Food day. It wasn't too bad when we were there, but our visiting American friend was floored about the blatant cutting in line. Welcome to Berlin...

If you and Ian ever are in the area when they're open, let me know. I'd love to meet up for a drink.

I found out about Markthalle just last week! There's some crazy yummy food there and The Arancini (italian fried rice balls) in particular were sooo good!

YES Natalye - we really need to get together for a meet-up.

Arancini eh Federico? We will have to check those out. Mmmmmmmm!

Hi Ebe, we've been going to Markethalle IX the past 2 weeks, for the weekend market and Street Food Thursday. Personally I prefer to go for weekend brunch because the vibe is so steady and lovely. Street Food Thursday is too crowded, but I will brave it again just to have a bight of that heavenly Gua Bao from Bao Kitchen! My posts on both are coming up soon!

Thanks for such great foodie tips! Hopefully we can check out these places by the river. We are visiting Berlin for the first time at the end of this month. Can't wait! I found your post through Twitter! Cheers from Poland! :-)

@The Diplomatic Wife - So glad you've been enjoying the market! We went early to both events and that seems to be crucial. I can't wait to check out your post and those Gua Bao.

@Joy - So happy you found my strange and indulgent little corner of the internet. I am afraid Bite Club may be coming to a close for summer (if it hasn't already) but do go out, eat and enjoy the city. I'll look for your posts on what you find to chow down in Berlin.

This place looks amazing! I want to try that pulled pork sandwich. Yum!