An Accidental Visit to the 9/11 Memorial in NYC 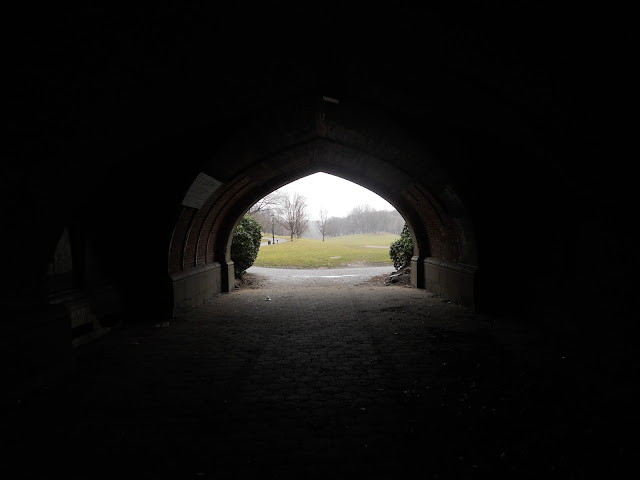 I always feel hesitant to share deep thoughts about politics as it usually turns into an ugly circle of cynicism, doom and depression. While I am informed enough to know the basics of what's happening, whenever I delve further I am inevitably frustrated with the state of the world. Can't we just talk about bizarre Americana and drinking on the Berlin UBahn?

However, this morning I woke up to "go to work" (aka sat up in bed to begin typing on my laptop) and was shaken by the date. September 11th. It's here again. It is the 12th anniversary of the attacks on NYC and the US at large and that thought has been with me all day.
I wasn't any more affected than anyone else not directly involved in the attacks and this isn't the worst thing that has ever happened in the history of time - I don't want to take anything away from anyone else or all of the other horrible events that happen around the globe. But I can't seem to shake this feeling today and it brought me back to our visit of the 9/11 memorial on a trip to NYC.

It was our first time in the city and everything was so exciting. We were on our way to visit "home" in Seattle for the first time, we had just shot our episode of House Hunters International, and we were in NEW YORK CITY.

We were wandering around the financial district when we saw a sign noting times and free tickets to visit the 9/11 memorial. It had just opened and in my trip planning I had assumed it would be too difficult to get tickets. But here it was, with a ticket agent asking when exactly we wanted to visit. 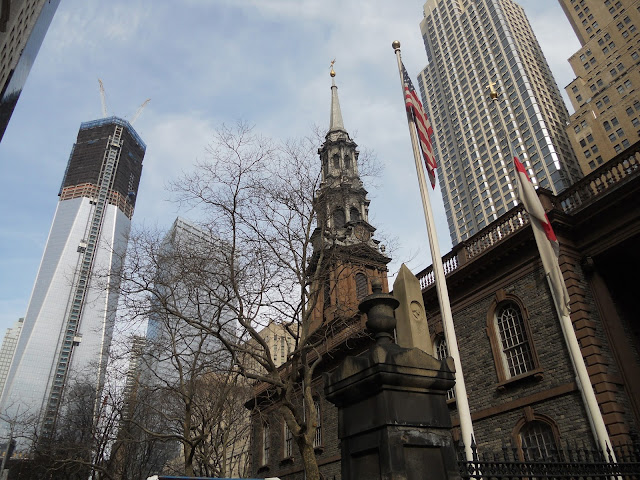 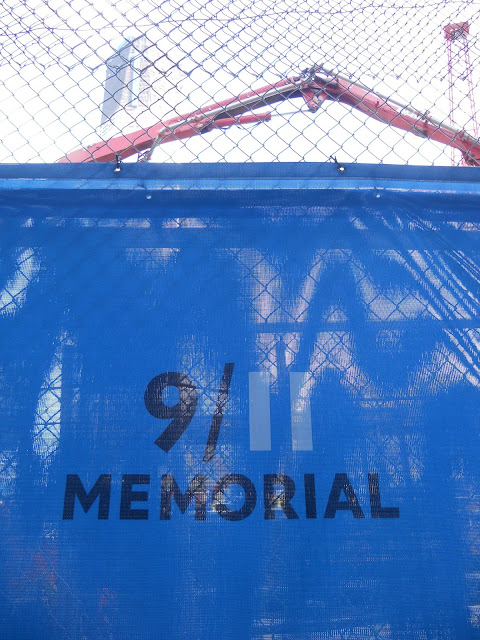 We checked our bags for anything that could be confiscated and walked down to the site at the printed time. Clearly still a construction site, security was housed in a small building with an intensely charged atmosphere. A picture of protest of Berlin at the Siegessäule only elevated the out-of-bodyness of the experience.


The tower was still a work in progress, as was the museum, but the two large fountains where the towers of the World Trade Center once stood were complete. 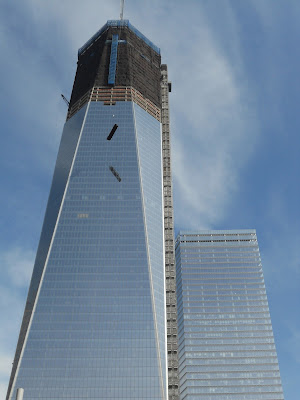 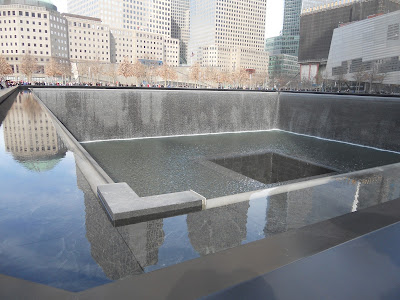 After a contentious design battle, Michael Arad's design Reflecting Absence was picked in January 2004. Two pools composed of the largest manmade waterfalls in the United States would mark  footprints of the Twin Towers. Each pool is a massive 1-acre with the water disappearing beyond sight. It is quiet at the memorial, both because of the hushed nature of the visitors and because the sound of the water is supposed to drown out the sounds of the city 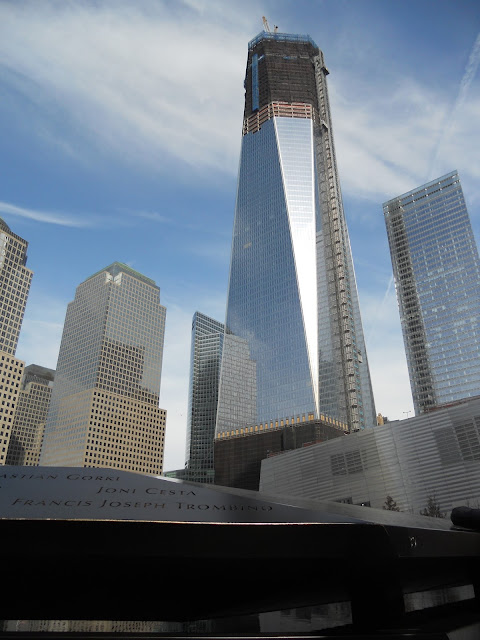 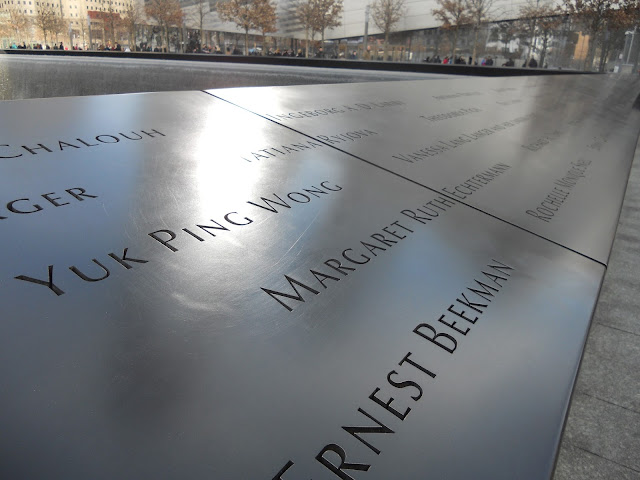 The whole site made me feel naked, stripped down to an uncomfortable emotional layer. I felt exposed and horrified and deeply sorrowful. I was trying not to be a hot mess while reading the names of the nearly 3,000 victims that line the fountains and utterly lost it when reading one woman's name, and that of her unborn child.

It hurts to remember. And it's good to remember. Today as we sit on the verge of another war with a Middle Eastern country, it is important to try and understand the powerful forces at work. During this morning's 9/11 tribute, a 15-year-old girl re-iterated this by addressing Obama directly,
"...President Obama, please do not bring us to another war."

Luci from MovingPostcard also recently released an interesting, and at times bizarre, look at photos taken just after the attack paired with videos at the same sites 10 years later.

Has anyone visited the site more recently? What should visitors know? What was your perception of the memorial?

...and if you would prefer more irreverent posts about the city,

8 Things We Didn't Know About NYC 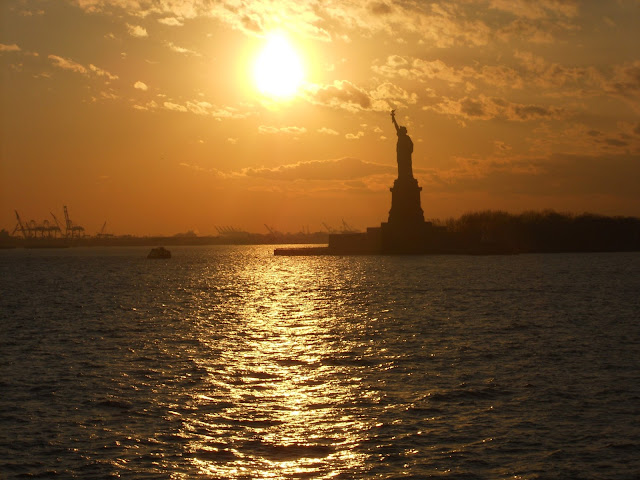 Good post - It is just and fitting to feel sorrowful. This event changed our lives profoundly and affected our perception of America's place in the world. Yesterday was a difficult day - and should remain so - as we should never forget 9/11.

This was a good read. Thank you for sharing pictures of the memorial. Your pictures and words were touching and made me feel as though I was there. I remember that day watching the coverage live and how unreal it was..then seeing the second plane crash. I know it cannot compare to the experiences of those people directly affected, but it definitely shook the world and everyone watching.