Take me out to the Mariners + Berlin Softball

I could give a f%*# about baseball, but Ian does. A lot. Somehow I have found myself at multiple Seattle Mariners games and am now spending my Saturdays in Berlin at softball games. Ah, marriage. At least baseball often comes with friends and beer. That I can deal with.


Back when we were visiting the States in June and the Mariners had a prayer of living up to their potential, we went to a game. My mom, my dad, my visiting nephew from Texas (younger brother of our Berlin visitor), Ian & I went to a baseball game and it pure Americana. Ian has always enjoyed talking about sports with my dad (in cliche fashion, his dad just isn't into it) and my dad has dealt with his ladies general apathy for most things sports throughout the years and it was  a treat to have two enthusiastic guys to talk about the game with. 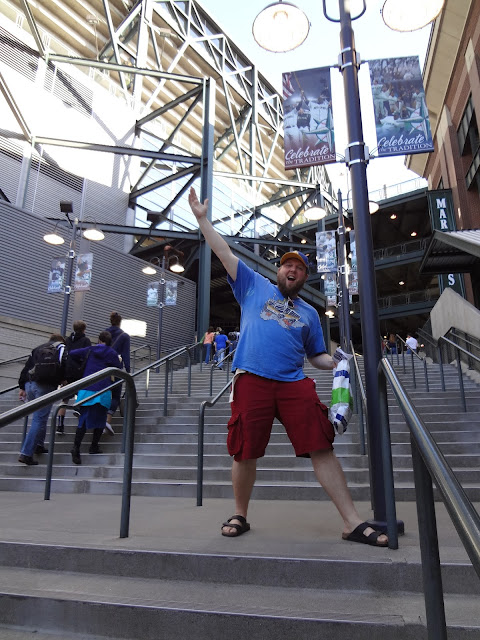 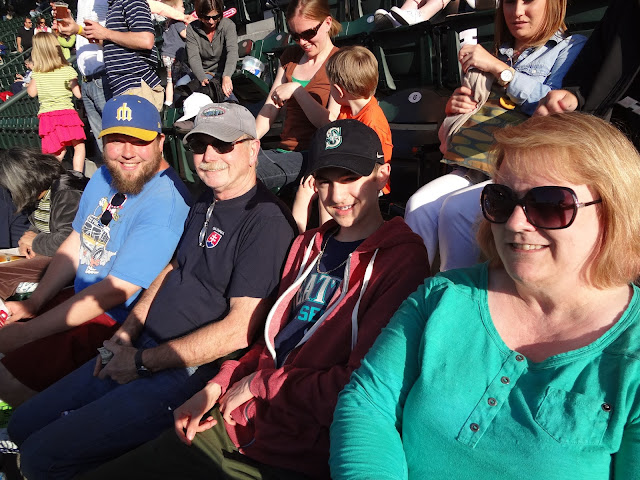 I hate how stadiums are all corporate named, but I love how our stadium highlights our lovely city. We usually buy seats in the cheap seats of the center field bleachers for about $10, but we ponied up just a  little more dough to treat my family to something nice and were rewarded with a stunning view of Seattle as the sun set. 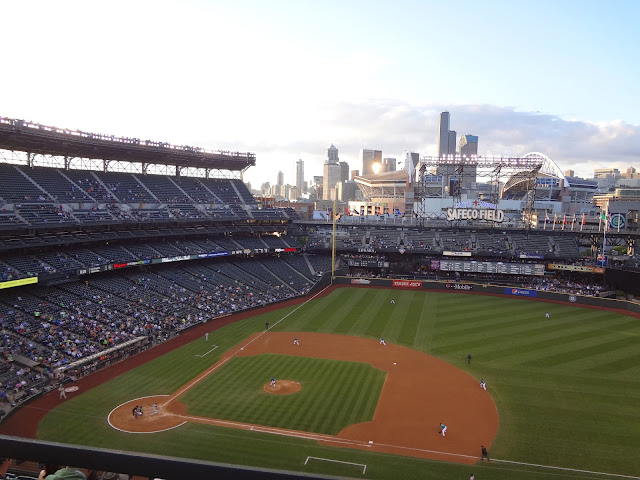 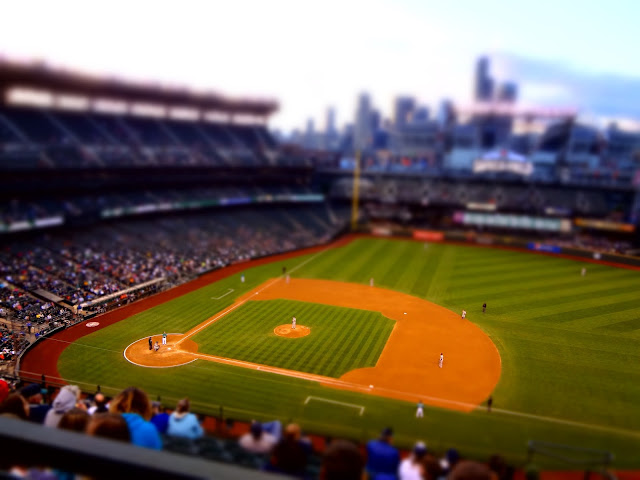 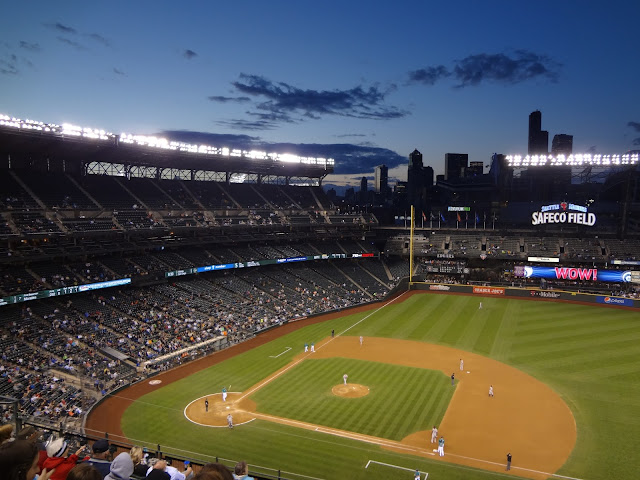 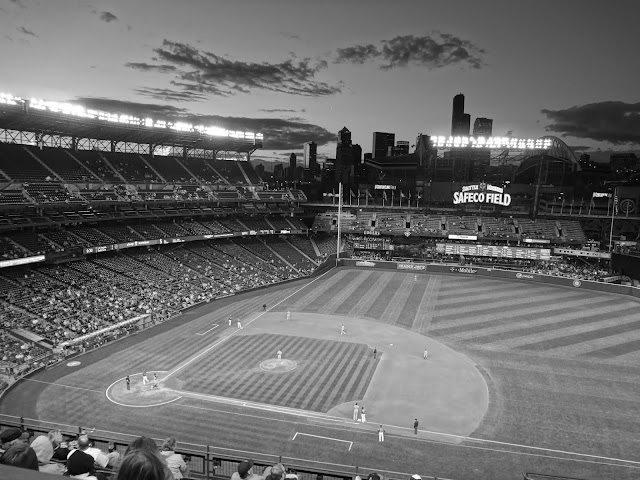 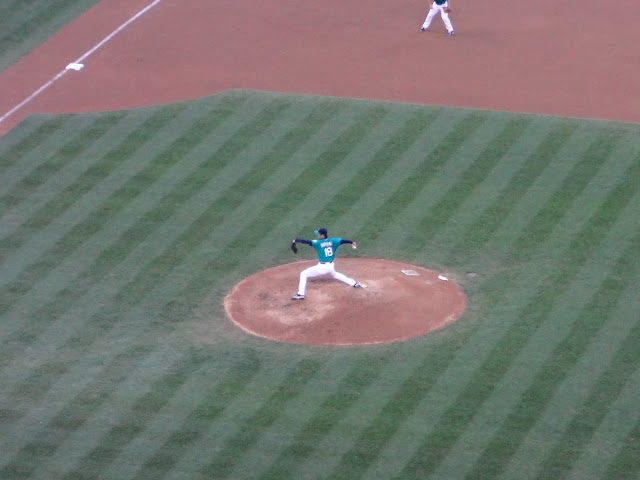 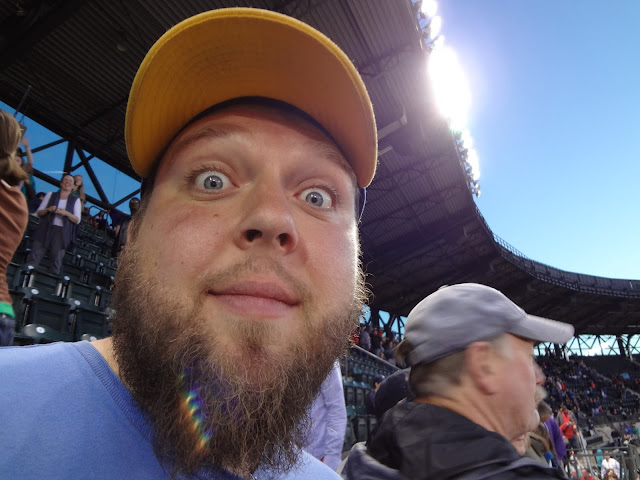 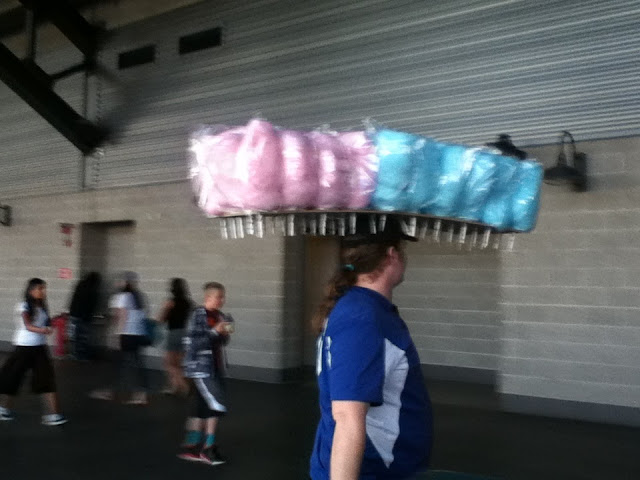 Before the game, we checked out the stadium's Mariners Baseball Museum. Ian was in b-ball heaven and even I was impressed by the well documented and presented artifacts of the game. The Mariners are a part of Seattle and examining the exhibits enlightened me to a different side of the city. 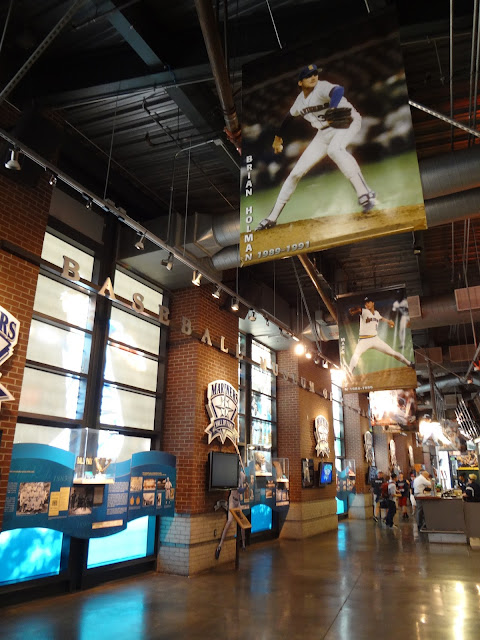 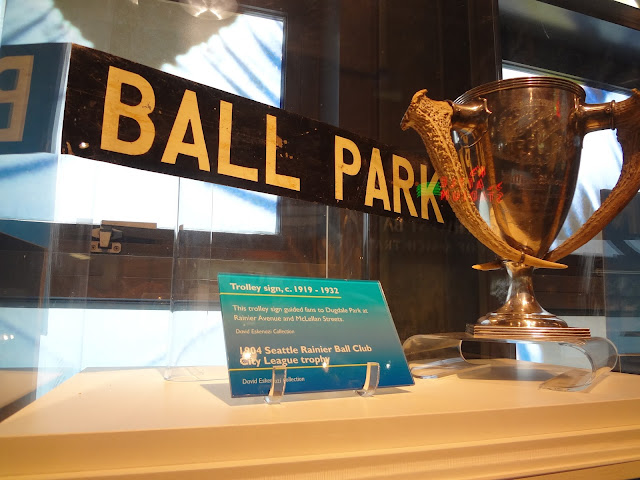 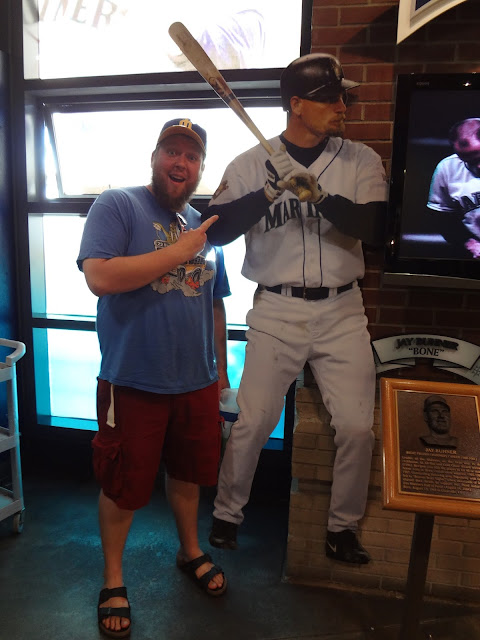 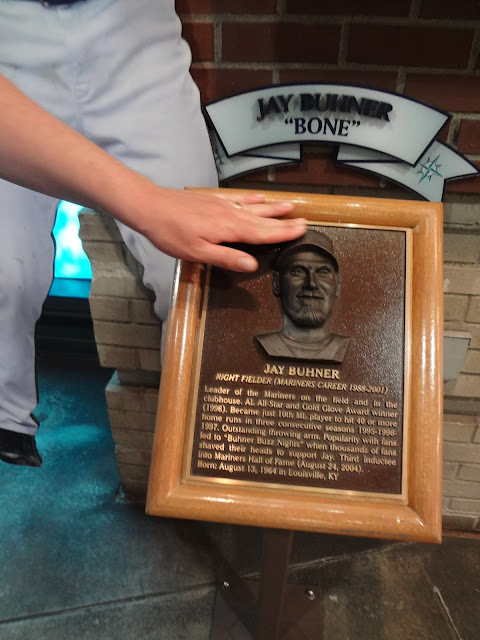 Peanuts were ate, Ian got on the Jumbo-tron, and most importantly the Mariners won. It was a perfect day of baseball that even a non-fan like me could enjoy. Ian even got to pretend he was a baseball star - which would continue back in Berlin. 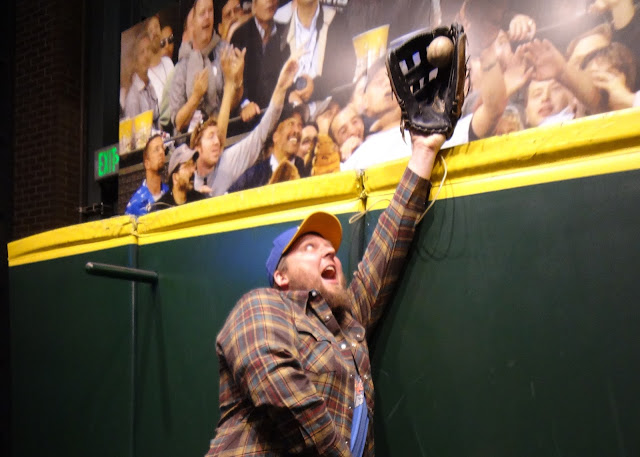 We returned to Berlin and I found myself surrounded by bats and balls once again. Back in the Spring, Ian had enrolled in a softball league on the Hit & Run Team.The league, known as the Diplomatic Softball League (DSL), is a hodge podge of founding members from the American and Canadian embassies, military personnel past & present, and randos like us. German, American, British, Canadian, young and old, all come to the field in Lichterfelde Ost most summer Saturdays. 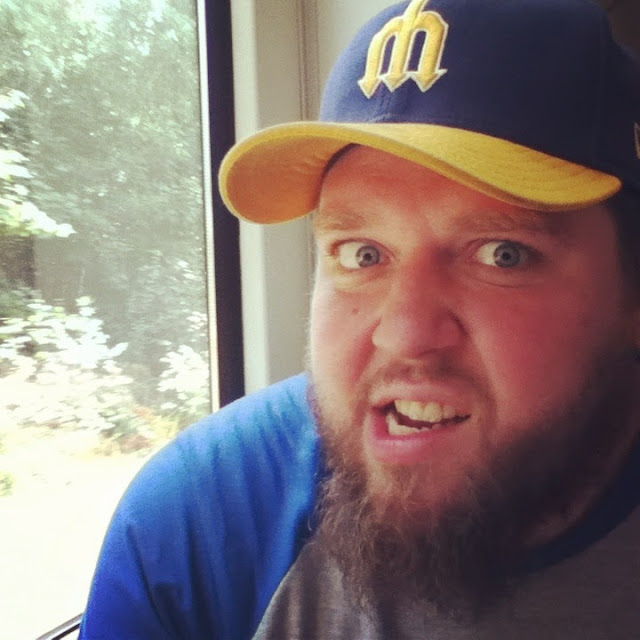 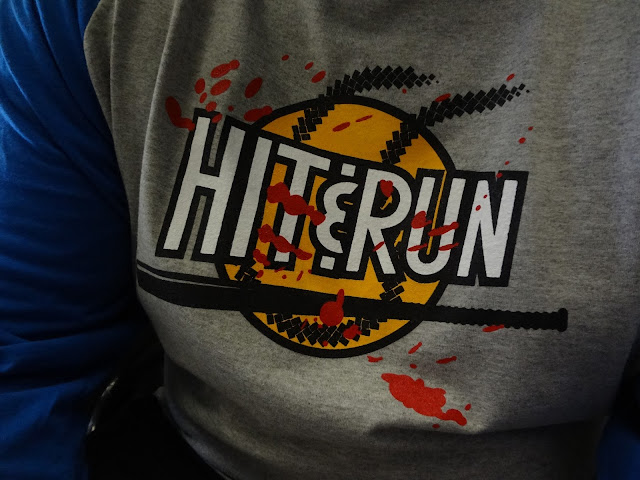 We weren't sure what to expect but stepping on to Defender Field was like stepping back onto American soil. English was everywhere and it was both enchanting and disconcerting.

Ian happened upon a team of predominately teachers which seems to make them more laid-back and reasonable than some of the other teams. For what is supposed to be a fun & easy summer activity we have seen entirely too much of full grown men throwing temper tantrums. We literally saw a player sit down on second base and pout and then throw a ball at the fence in front of the scorekeeper. Clearly, assholes come in all nationalities. 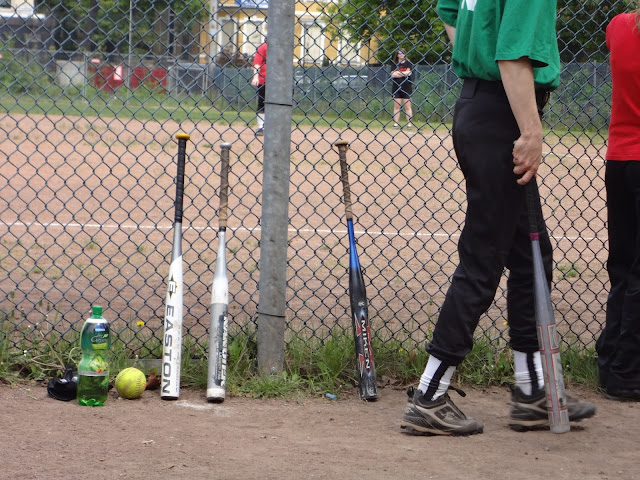 Like the dutiful wife (ha - who am I kidding?),  I pretend to know what is going on and cheer at the appropriate times. Mostly I spend my time taking pictures and reading, but I catch Ian doing well every once in a while. 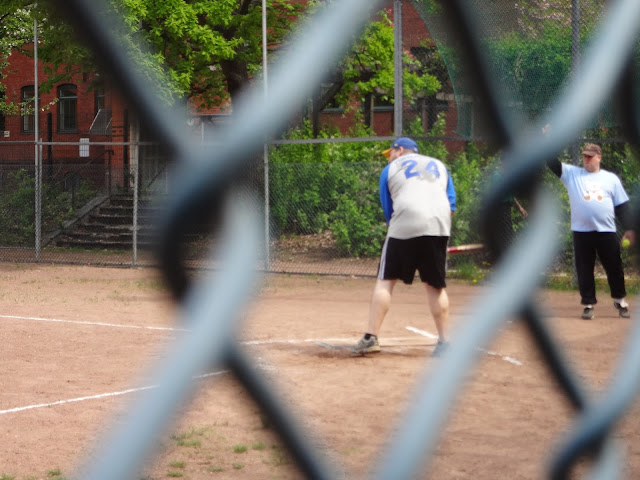 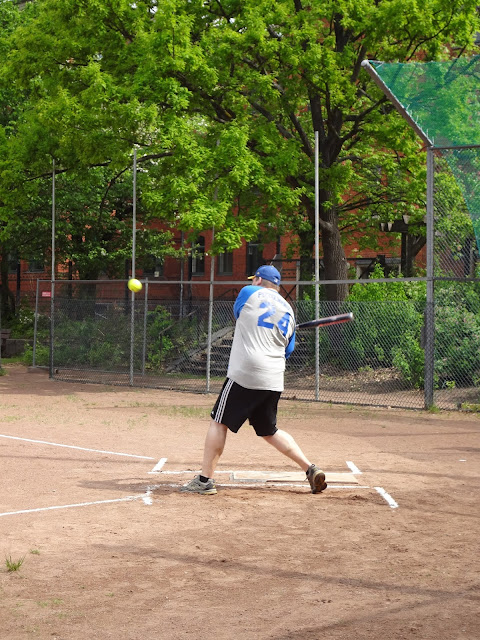 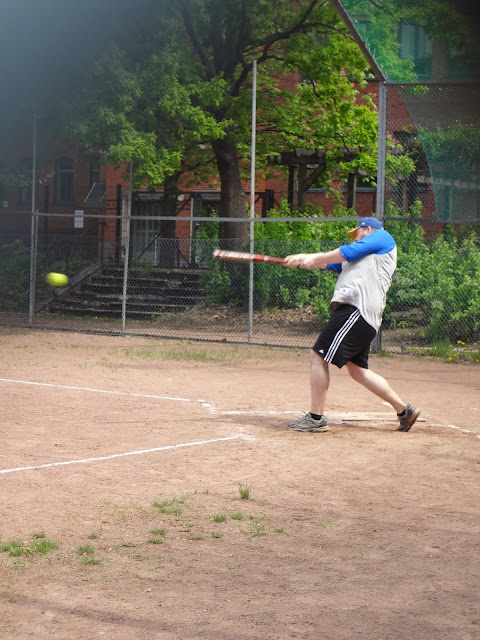 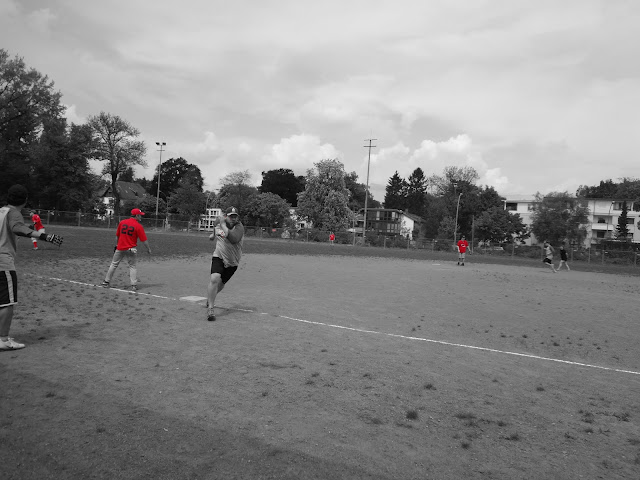 The highlight for me? American snack stand! American mustard, American pickles, American soda and all the hot dogs and burgers you can eat. The only thing German is the beer - as it should be. 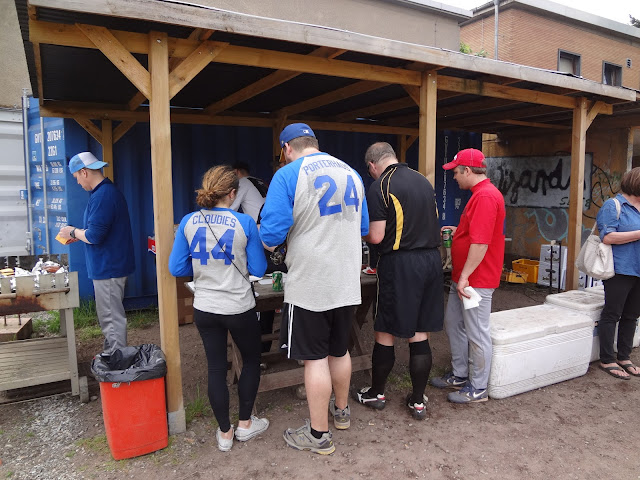 Ian's team is doing well so far in the play-offs with finals coming up in about 2 weeks. Press your thumbs for Hit & Run! I know I'll be there...for the burgers.

NPR Berlin had a story about the league a few years ago you can listen to here. If you are interested in joining the softball team, let us know and we will pass your contact info onto people more connected than us. And if you just want to come watch, join us on Saturdays at: 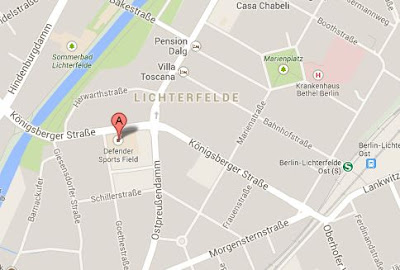 More pics of Berlin Softball
Posted by Unknown at 20:05

Great photos and story. Liked the Mariners C-Link photos, especially the ones with specific focuses and special effects. Liked Ian's hit and the colored shirts on the outfielders. Mostly like that you're a bit homesick for America occasionally and that we got to spend time together doing an American pastime together!!

Living in Canada, I really ought to go and watch a Baseball game, but it just doesn't appeal to me! If I had a view over the city like that would gladly sit there all night though!

@Holly - You should definitely go! A group of friends, some over-priced beers, and a hot dog make-up for many a memorable outing.