This city is full of nondescript, even decrepit-looking buildings that hide a world of Berlin history. So we weren't put off when we arrived in the middle of nowhere (technically Oberschoeneweide) to what looked like a never ending waterfront of abandoned factories.

We had been invited by a friend to take a tour of Rundfunk der DDR and really had no idea of what to expect. But as we're usually ready for anything, a tour of an East Berlin radio we would do. 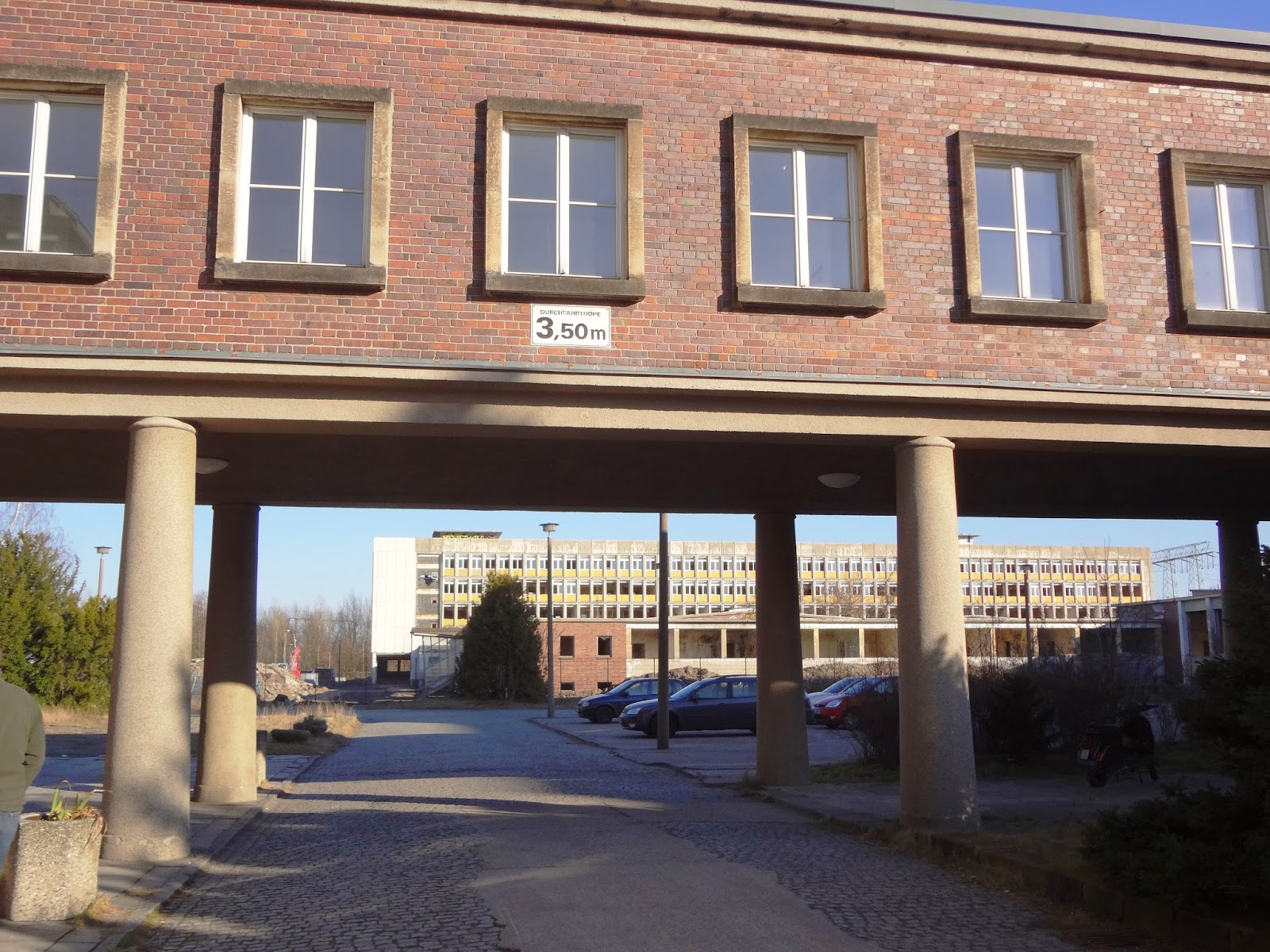 We joined the group at the entrance and wondered if the tour would be in English or German.

Ok, time to put our German ears on. We learned that this giant complex of buildings once housed an employee populace the size of a small city. In addition to the recording studios, concert hall, and conference rooms, there was a canteen, clinic, bookstore, grocery store, ice cream parlor, dentist, hairdresser and even a sauna (Germans and their sauna). Decorated in the Bauhaus style, the site is impressive both for its size and authentic details. 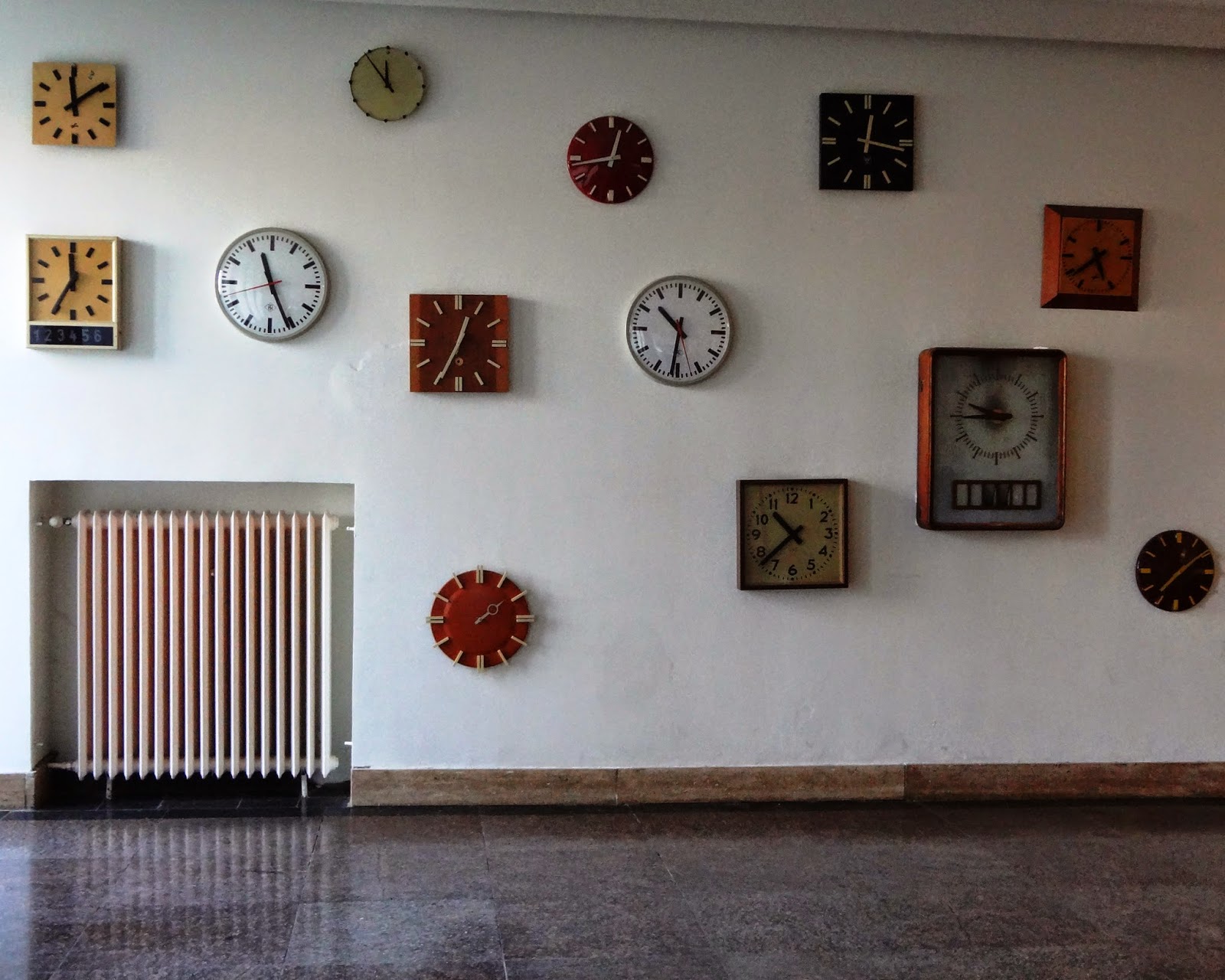 The hallways were wide enough to accommodate the thousands who worked here and our little group was dwarfed by their size. Studios can still be rented out so the occasional musician would wander out one door and into the next. We heard the quickest way to move about this gigantic space is by skateboard or scooter and there are a few lying around. 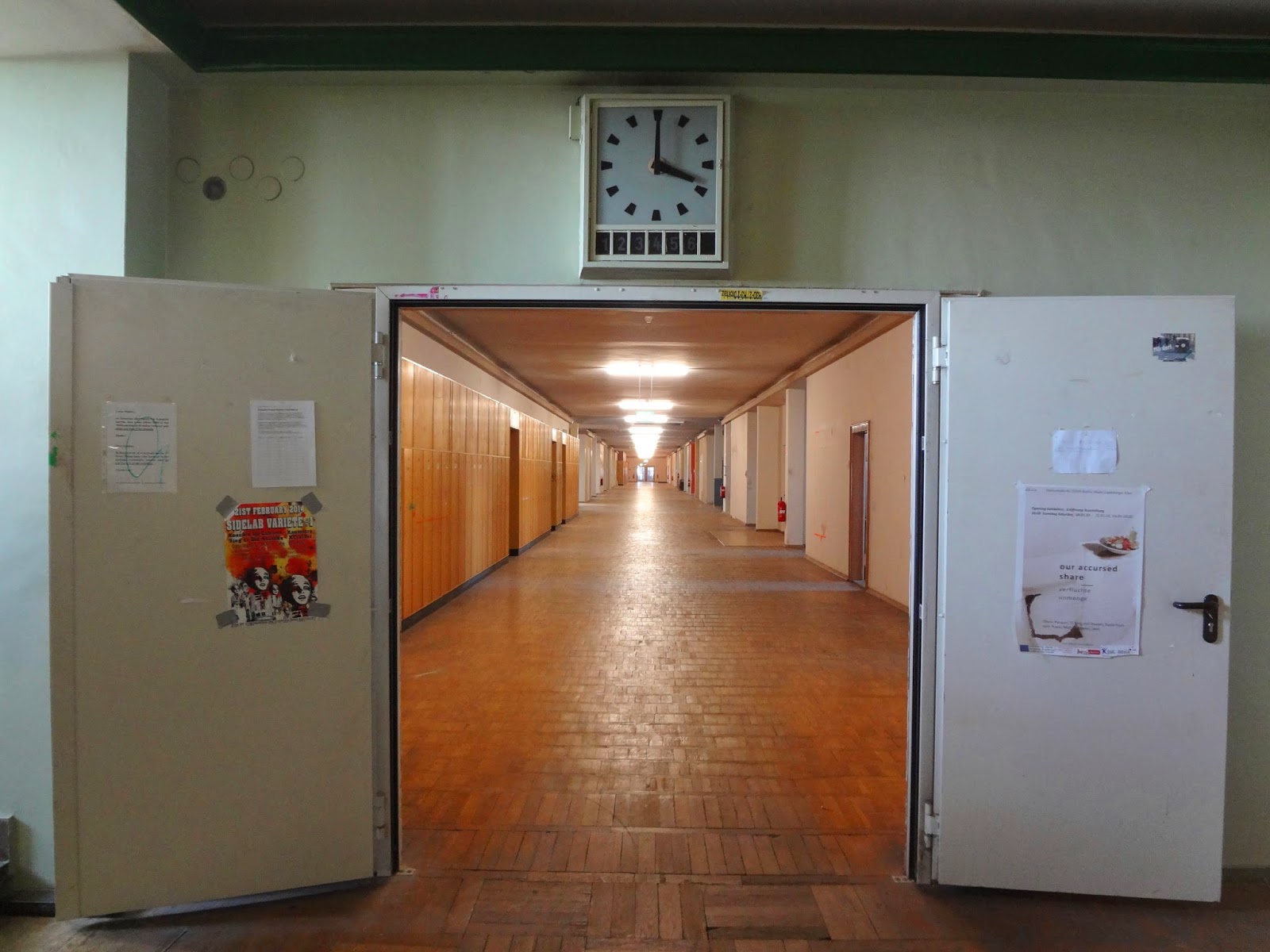 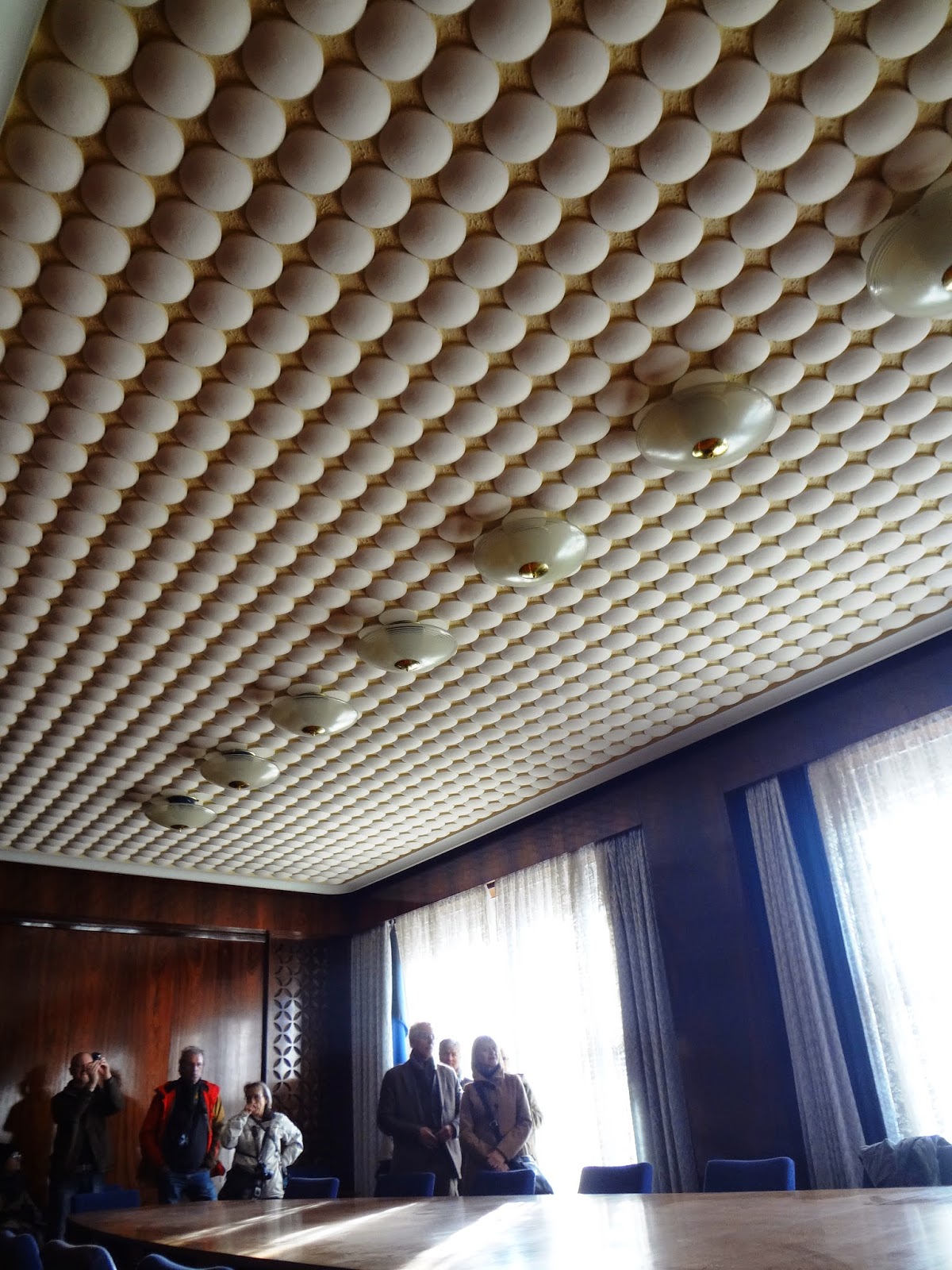 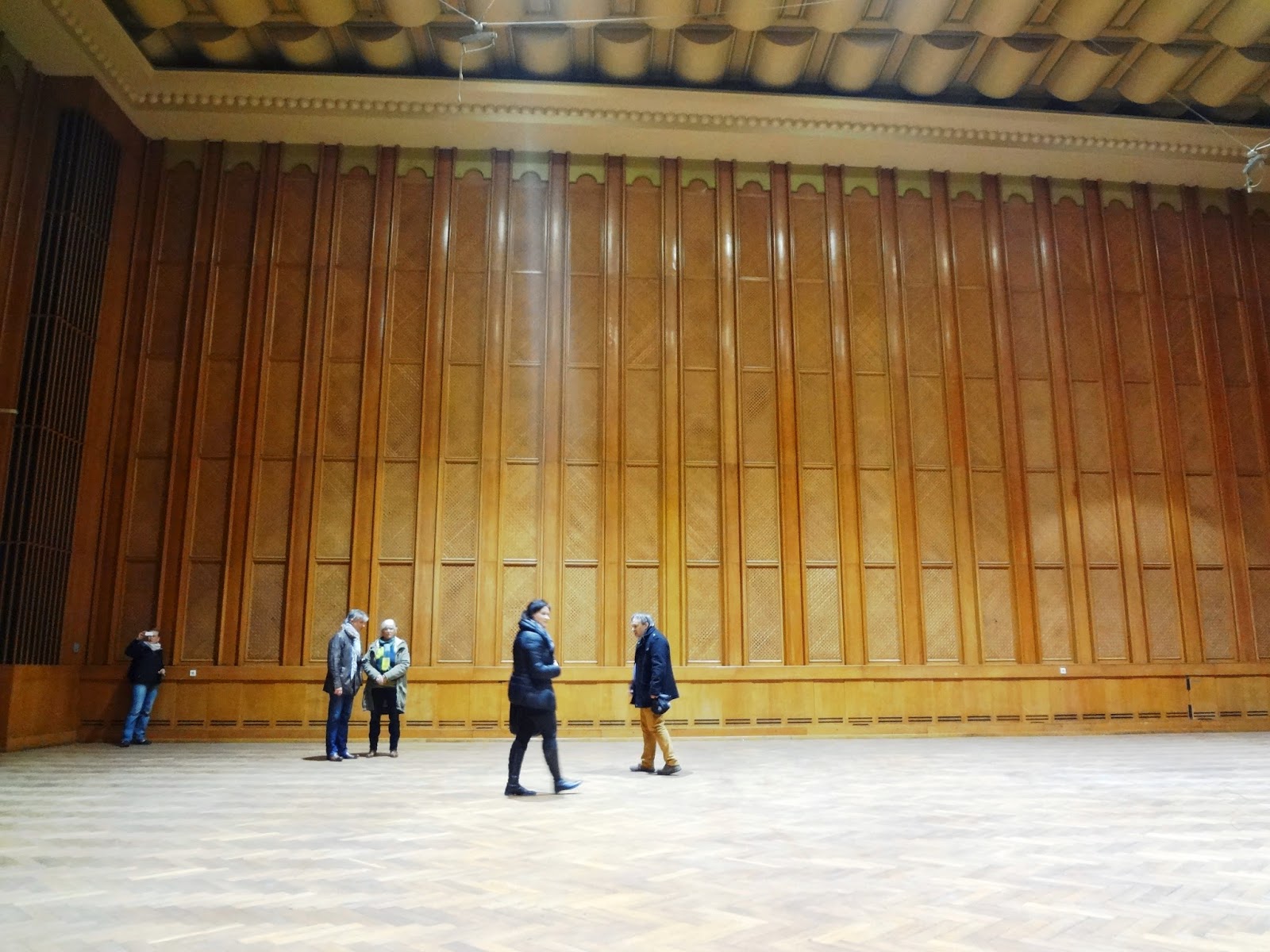 We happened to be there on one of Berlin's rare winter sunshiny days - which I wouldn't think would matter for an indoor tour - but the light streaming in was all kinds of magic on the wood and tile floors and stoic concrete walls. 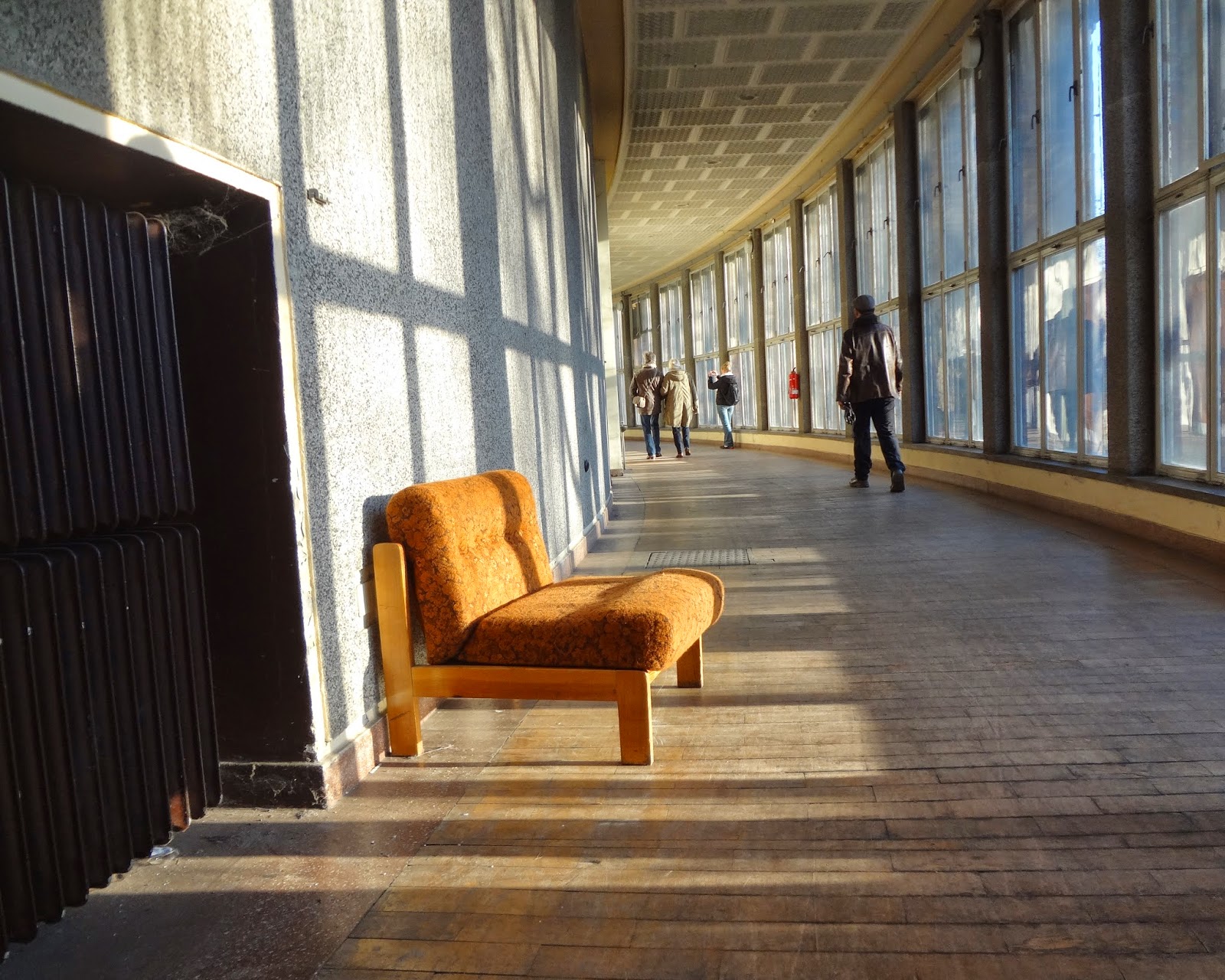 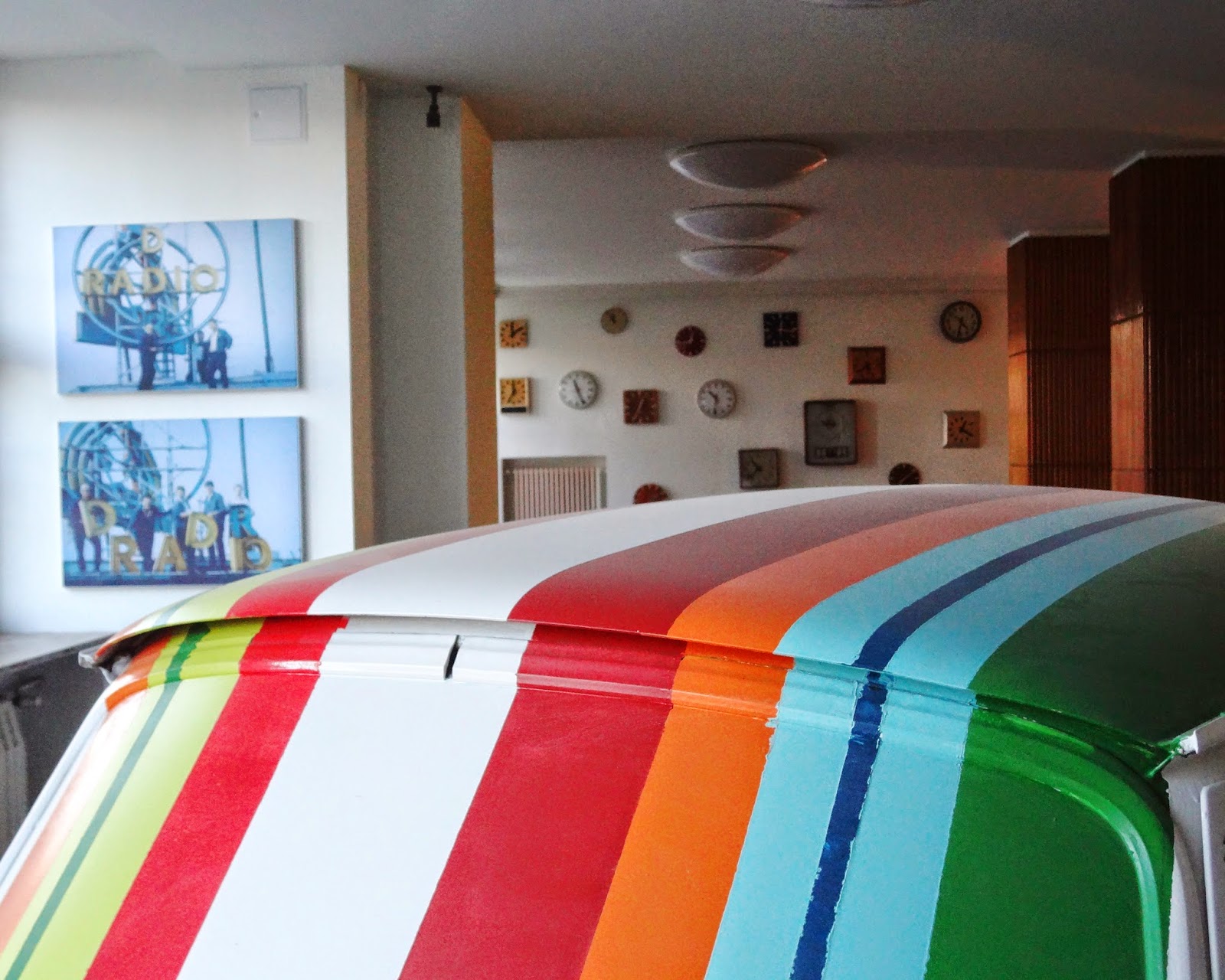 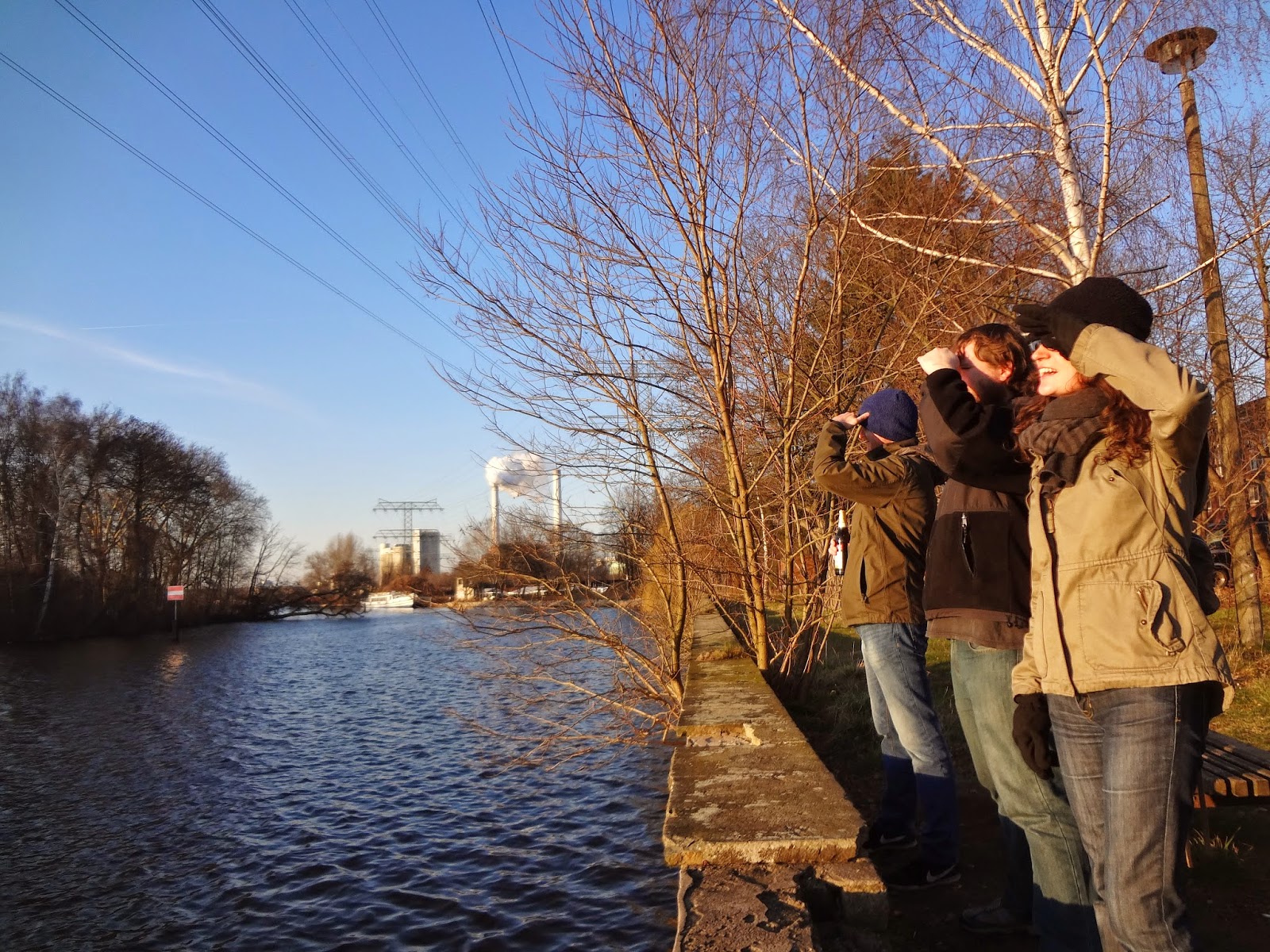 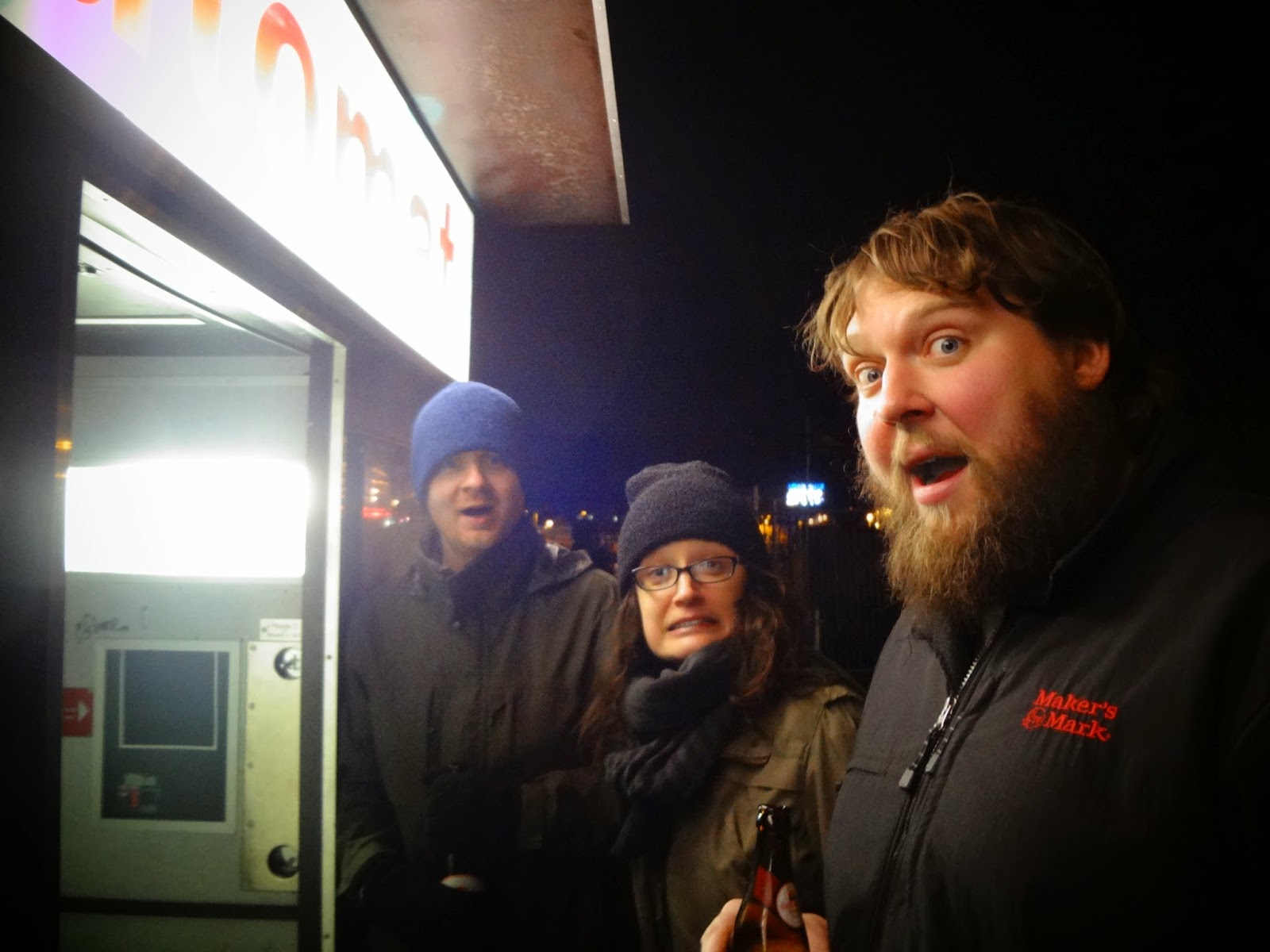 I don't know what exactly we all wanted out of the tour, but it was one of those perfect Berlin days. Our friends that had invited us were returning to their homeland in England and we all had the feeling of things coming to an end (...and beginning as they are pregnant as well).


The tour was a great look at a previously undiscovered corner of the city and a reminder that you can never know all of Berlin.

On our way home we came across the photo booth at Warschauer and decided a spontaneous photo was the best way to remember the day. After all, things don't really end here, just change. 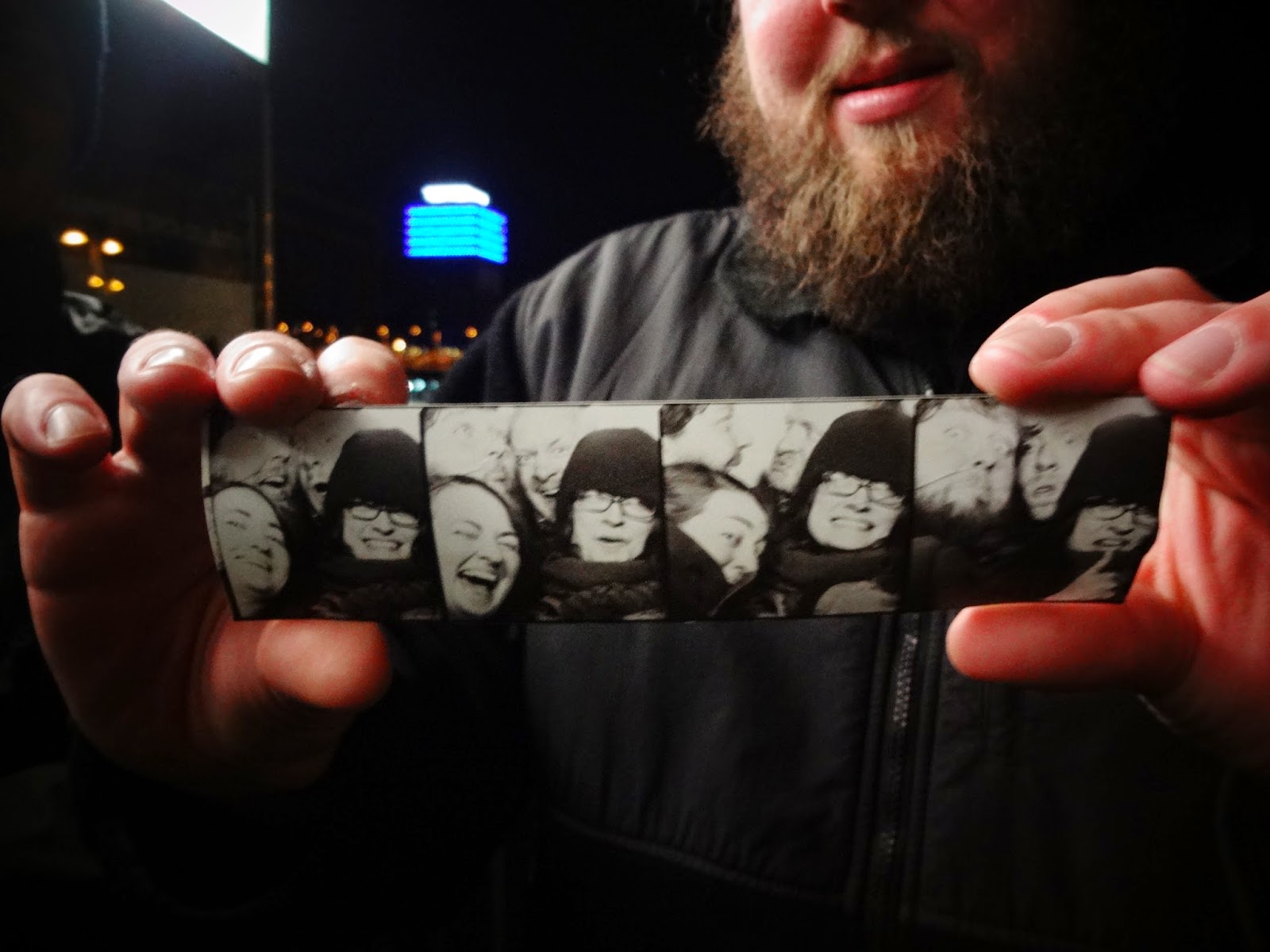 This radio organizations actually began in a vacant 135,000 m² factory building. Transferred to GDR control in 1952, the site is located in the Oberschoeneweide district along the river Spree, the site grew to include four broadcast studios, various recording rooms and a control room by 1951. Though a fire held up development in February 1955, it continued to grow with the completion of the block B Broadcasting House. At its peak, about 3,000 people worked in Nalepastraße and catered to all the wants of its citizens with a canteen, conference centers, clinic, bookstore, grocery store, ice cream parlor, dentist, hairdresser and even a sauna.

Despite this vast productivity, all was not well. Western competitors like American's Rundfunk im Amerikanischen Sektor (RIAS) and British-run Nordwestdeutscher Rundfunk (NWDR) were seen as a threat to the GDR's control. After the Berlin Wall went up in August 1961, the GDR began actively blocking access to stations of the West. People were encouraged to turn their antennas so they didn't receive unauthorized transmissions and to try to jam foreign signals. Access to Western media was incredibly restricted and anyone caught with contraband could be questioned.

After the fall of the wall in 1989, the station was re-named Funkhaus Berlin (Broadcasting Center Berlin) and merged broadcasting powers in 1994 when RIAS to become Deutschlandradio Kultur (also known as DLR Kultur or DKultur).

The biggest obstacle turned out to be property disputes as various sales were made, renegotiated, and fell through and charges of fraud and embezzlement were made against the former managers. The future of the Rundfunk der DDR site was uncertain, but its unique recording spaces led to a re-opening for artists. Though only restored to a fraction of its former use, tours offer an excellent view of the magnificent Bauhaus architecture and a piece of Berlin history.

A tour of the site allows visitors to walk the cavernous halls that once accommodated the thousands of people working here, as well as elegant meeting rooms and impressive recording halls. (Note that a visit to the famous recording halls in only possible if there is no recording). Though the electronics have needed to be replaced as technology has continued to develop, the acoustically pleasing dimensions of the studios and recording halls are still pitch perfect. Artists like A-ha, Sting and the Black Eyed Peas have recorded here.

We happened to visit on a sunny day which allowed for the light to stream in, highlighting the geometric details and intricate woodwork. Random elements remain like the alien spaceship, views of the Fernsehturm, Spree Park's abandoned Ferris Wheel and the Milchbar (Milkbar) that provides authentic East German beers and meals.

Nice post, Ebe. It was a great day and it's cool to be reminded of it. You might like to know that the photomat strip is framed and up n the wall.