Disregarding what my parents actually likes (nature/few people), we went on a city break to Brussels between Christmas and New Years.
I know that makes us sound like terrible hosts, and we kinda are.

"But Brussels will be beautiful!", we thought - and we were (mostly) right. It is ridiculously lux and hued in gold. It is also almost uniformly cheap to fly to as it is a hub for European relations.

If we had stayed right in the center instead of the neighborhood of Stalingrad (slightly shady by the train station) and my parents hadn't been getting over the worst cold ever and the AirBnB we planned on staying at hadn't canceled and we last minute booked one that had them listening to our 1-year-olds screams all night - this trip would have gone better. If this trip hadn't been amidst (justified) fears about terrorism in Brussels - this trip would have been easier.
That said, Brussels is beautiful, airfare was cheap and everyone should visit the picturesque Belgian capital.

Ratings will be done in Frites ( fries). We were such good parents for a year (ha!). We denied delicious fries to our daughter til we got to Belgium. Then, fries were everywhere and she ate them. And loved them. Thus - she loved Belgium.

5 Frites -
Nothing to complain about – like most European cities, transportation seems to be ready and waiting for you on every other corner

ebe
4 Frites -
This city is itsy. Like, so walkable. While my intro makes it sound like we stayed in the boonies, it took us a mere 10 minutes to be right in the city center. And that took us by multiple delicious waffle stands, impeccable grandiose buildings and so many cool cafes, bars and design stores.

When we did need to step onto the tram, it easily took us to the other side of the city for about 2 euro. And our location next to the train station made arrival easy, and a day trip to Ghent easy - even with a poor wheezing grandma.

Rail prices were really reasonable with each of us paying about 10 euro to get to Ghent. Getting in from the airport, however, was almost the same price. A common tax on tourists, still kinda a bummer.

The airport itself was small enough to easily navigate and professionally managed, befitting a European capitol (a-hem Berlin).


cheryl & David
3 Frites -
Beautiful apartment, in an okay neighborhood. Not the best accommodations for our group – but we made them work. Beautiful old building.

We wheeled our luggage from the train station and were immediately a bit skeptical. My parents were already on edge because of the terrorist threat. Ian was on edge cuz (as mentioned before) our original reservation had canceled and he had to come up this place last-minute.

The door opened to a lovely woman who told us in broken English that flat wasn't quite ready. Ok. We waited on the curb. 10 minutes later, it was. The place was beyond elegant and filled with designer goods - not ideal for a toddling baby.

It was set-up loft style with the bedroom (for my parents) open to the main living room (where we would be sleeping with the kid). Downstairs was the bathroom. So - lots of stairs. I am pretty sure visions of our daughter falling down a number of steep steps were terrifying the grandparents. Clearly, this wasn't perfect for us, but we were determined to make it work.


The first night there was crying, from my daughter and from all of us as we got no sleep. My mom woke vowing to find a hotel. Instead, we switched beds and that actually worked better. My mom can't stand stuffy European homes and likes to sleep with a window open - not an option in the loft area at the back. They were comfortable on the large pull-out bed and Ian and I inherited the dream pillow bed upstairs. Seriously guys - this was the most comfortable bed I've ever slept on.


cheryl & David
3 Frites -
I felt like we had seen most of the sights before, just in a different city. Hard to find the Belgian-ness of Brussels, it is not as distinct an influence on itself as other European cities.


ebe
4.5 Frites -
Can you believe that town square? Is there a more beautiful spot than Grand Place-Grote Markt (top pic)? We walked in from a side street and I think there was a simultaneous "Whoa". Even from the kiddo.  This was doubled during the Christmas light show that had music and light interplay among the buildings.

Grand doesn't begin to cover it, and it doesn't end there. The buildings are intricate and incredible with little side streets shooting off in all directions. Palais Royale/Koninklijk Paleis (Royal Palace), Palais de Justice and just walking around wowed.

On the other hand, the famed Manneken Pis is a bit of a yawn. The whole family of pissers actually. Maybe when they were created it was a scandal, but today - I've seen worse.

We also toured the European Union quarter and it was pretty quiet during this holiday time. Parlamentarium is free to get into and had enough to keep us occupied for a bit (as well as being the location of Matilda's first stairs!), but it wasn't a must-go.

More impressive was one of Ian's beloved war museums. This place pleased us all with room after room of military grandeur and a hanger full of airplanes. My dad opened up with rare stories of Vietnam and Mad got more french fries (more on that in a minute).

One thing we missed out on is the local tour with a Brussels Greeter. I signed up, but didn't hear back til after we left. Maybe this was a blip because of the holidays? 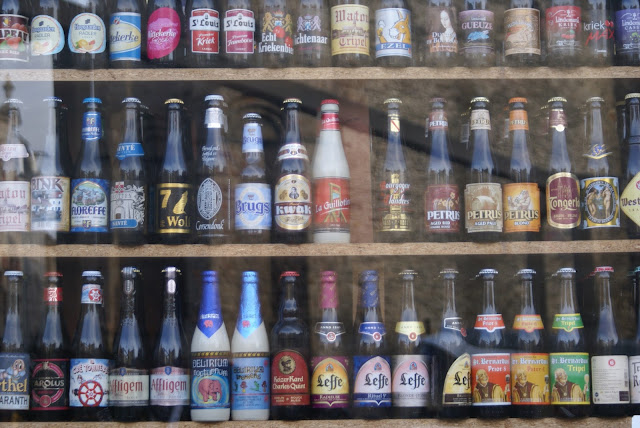 ebe
4.5  Frites -
The first meal we had was one of those just-sit-down-we're-starving! and while it fed us, it wasn't anything too special - except for two things. Great beer and plenty of free bread. You've got to love a country that offers you those two things at every turn.

One of the next things we saw were these ridiculous sweets from Aux Merveilleux de Fred. They have large windows just a few streets down from Grand Place-Grote Markt and they clearly know what they are doing. Making magic. We bought a box which was ridiculous, but ohmegawd.

Continuing on that diabetic-inducing vein, I had to have a waffle. I was a little put off by the price as the basic petite waffle is just one euro, but prices pile as high as their toppings. What to choose?! Finally, I said "screw it" and ordered a 5 euro waffle of divine sweetness. So worth it.

As far as "real food" - it was excellent, if a bit expensive. Meaty, with sauce and rich. I ate a good bit of steak. And one absolutely fantastic burger steps from our flat (Josephine at Houtsiplou).

The things that are cheap are Middle Eastern (like Berlin) and fries. We had the friendliest meal at a little Lebanese place in our neighborhood. And I wouldn't be surprised if fries were consumed with every meal. A little shop in the center gave us the full experience with a cone and wall of sauce. 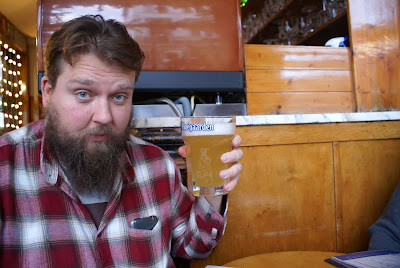 The last can't miss thing is the beer. Germany beer gets a lot of glory - rightfully - but Belgian beer is our favorite. They aren't afraid to put weird stuff in there and make it alcoholic. My parents watched Mad one night so we could visit some of the quiet (and not so quiet) underground bars. We were treated to the weirdest live performance and many, many beers. Because of the mixed crowd and holidays we didn't make it to a brewery (there are a few in town) and that would be something I'd go back for.

Clearly, I loved it. Despite the difficulties, Brussels' attractions were too lovely to ignore.

For more of the things we did in Brussels, as well as things we didn't get around to, look at my pinterest dream board for Brussels: https://de.pinterest.com/texkourgan/brussels-for-christmas/ 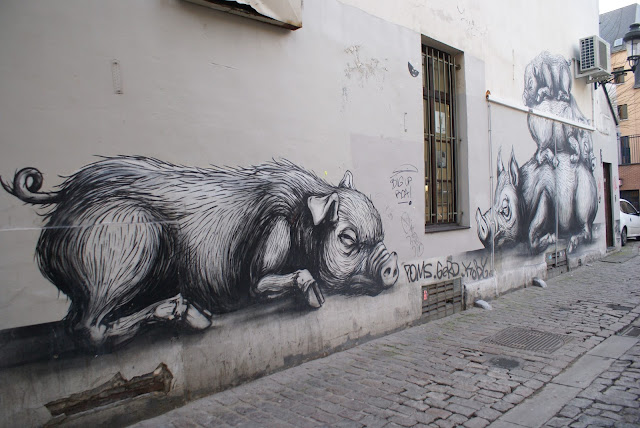 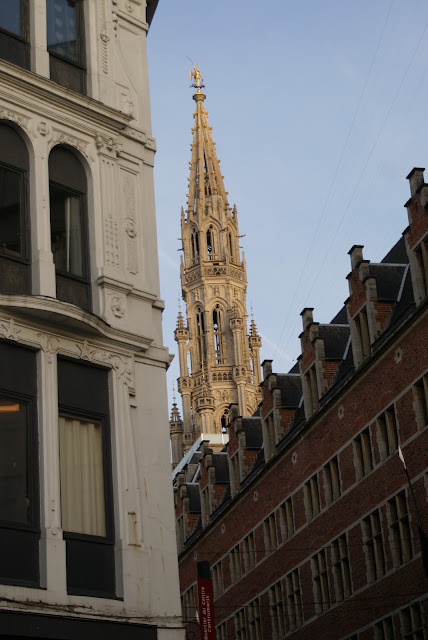 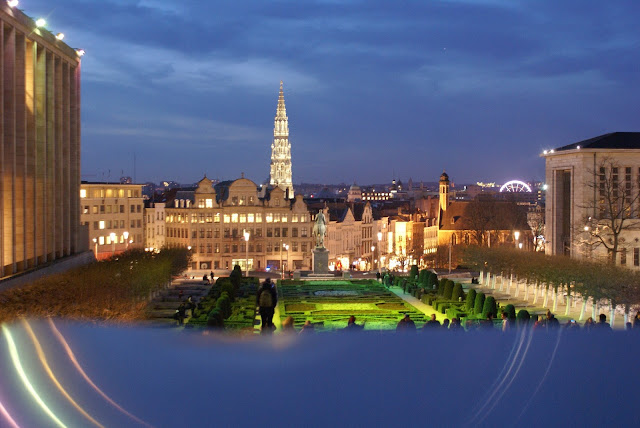 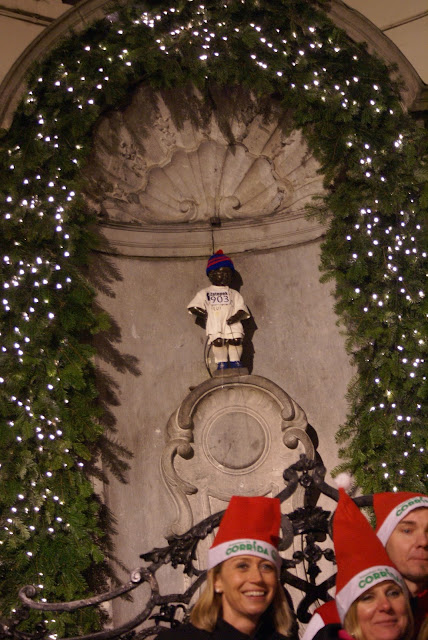 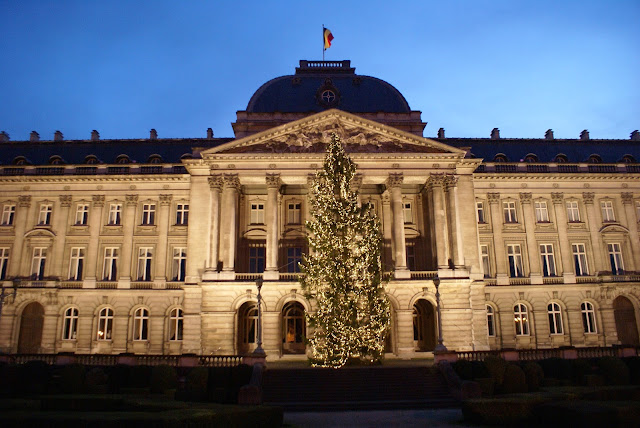 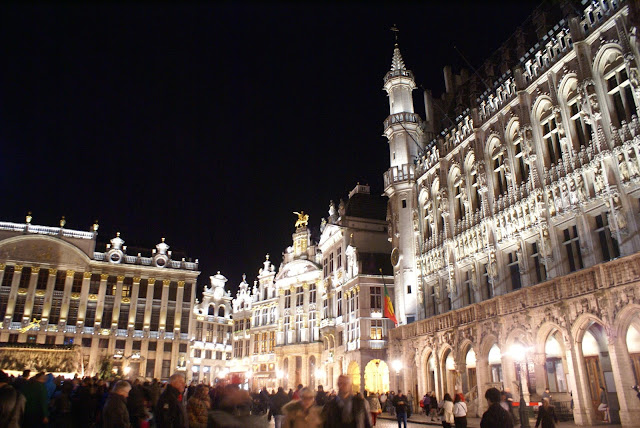 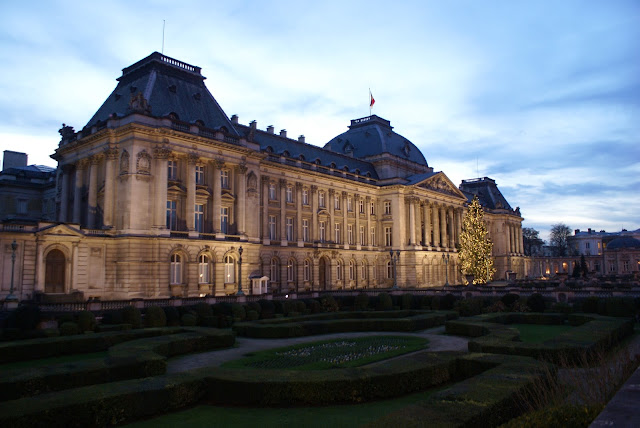 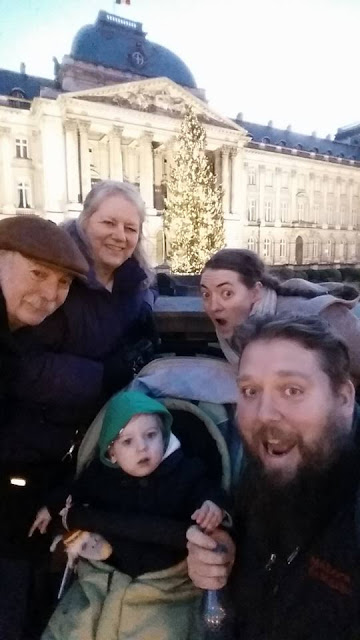 cheryl & David 5 –
Beautifully preserved town, perfect for an afternoon stroll along the riverfront, filled with fine shops and restaurants.

ebe 5 –
Ghent was ridiculous. So charming, so perfect, just so absolutely charming. We went to the castle, we admired the Christmas markets, we fell in love.

I think staying in Brussles was smart for ease and ability to take a day trip, but maybe it would have been best to stay here or in another perfect Belgian town, Bruges. In any case, if you get the chance to visit, GO. Especially at Christmas. 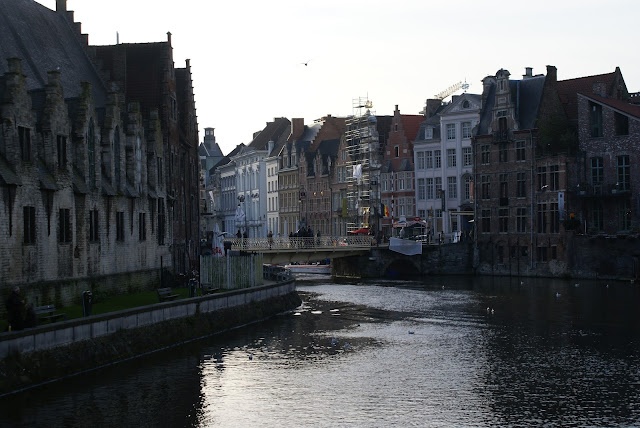 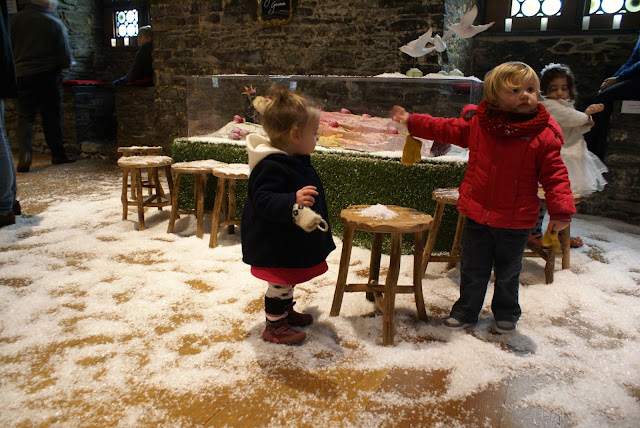 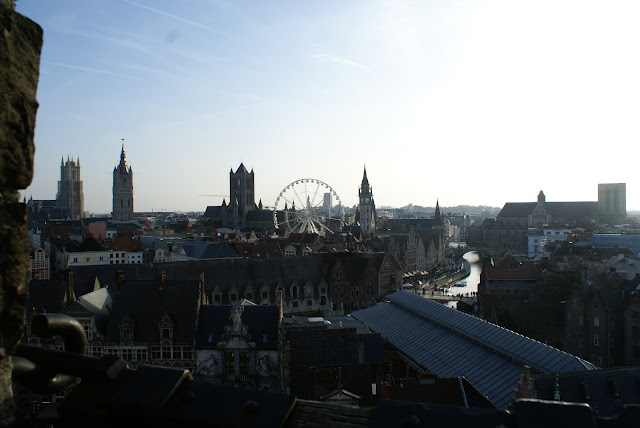 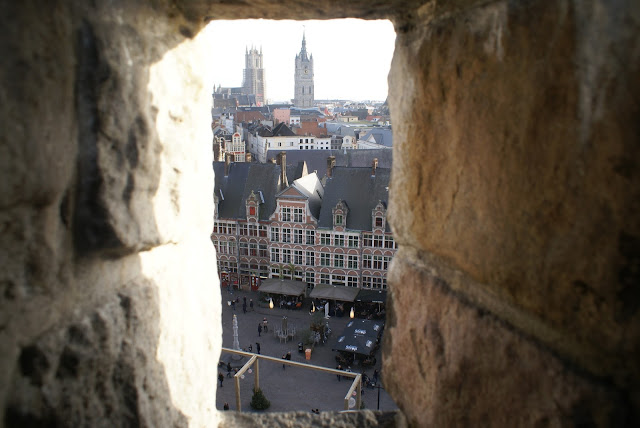 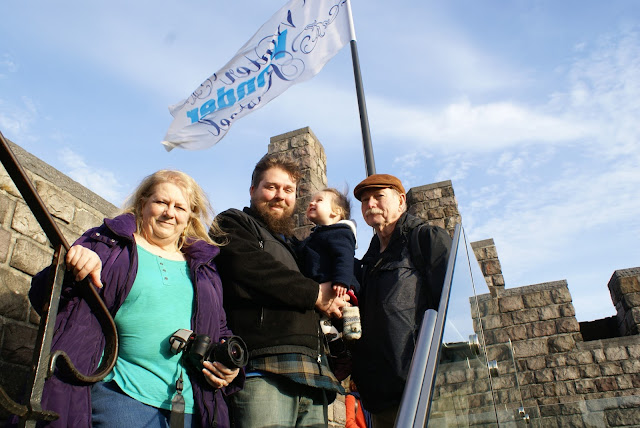 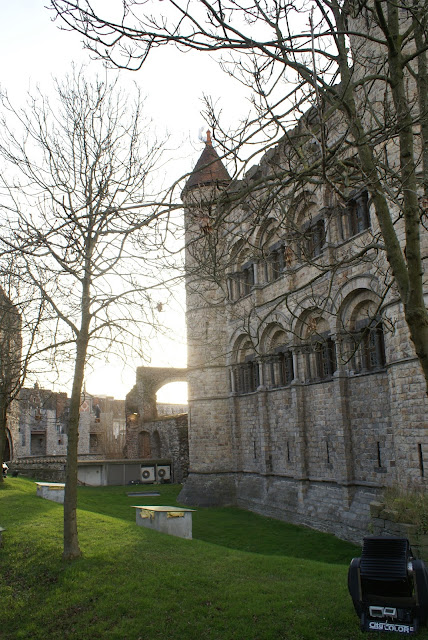 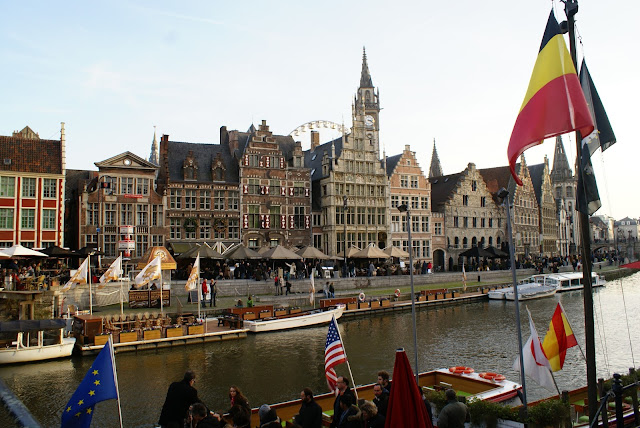 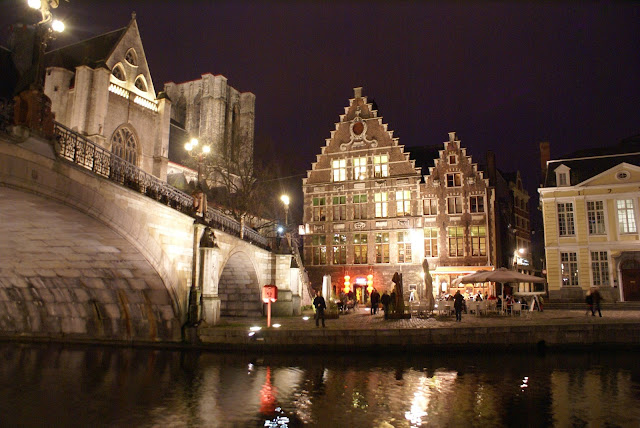