10 Things we Didn't Know about Paris

1. People smiled! I can't even explain how this lightened our already luminous moods. While the stereotype of Germans being cold and humorless is far from totally true, they don't smile much, especially in the blustery NE corner. The first time we went to London was after a month in Berlin and there too we felt the friendly vibe we didn't realize was missing in our Berlin lives. Obviously this is just our experience, but we always laugh when people talk about how unfriendly the Londoners are or about the rudeness of the French. 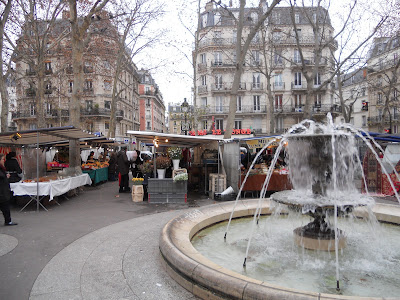 We went a market near our AirBnB flat 2 different days and were given freebies both days, recognized & greeted with a smile. That would NEVER happen in Berlin. Ian goes to the same currywurst stand almost everyday and struggles to get the same amount of fries.

In addition - check out that respect for the elderly! Here in Berlin we see teens push past old ladies with canes to take the last seat on the UBahn. In Paris, the elderly seem to move in a bubble where they are taken care of first, greeted with respect, and seem to rule the city. Ian is hardened against the old Berliners. He says maybe if they had taught their children to give up their seat, they would be sitting down now. 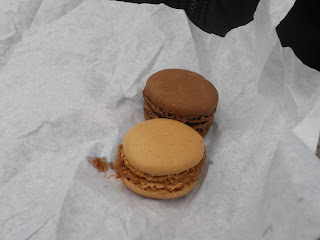 2. Butter Sandwich. What the hell France? You have delicacy upon delicacy (hello macaroons!), yet insist on putting butter on perfectly good sandwiches. Dislike.

It seems an additional insult to American women who go for crazy diet fads and low-carb foods and here are all these fabulous Frenchies putting gratuitous butter on their jambon and fromage
(ham & cheese) sandwich.

3. The French live in houses.  Before we moved to Berlin, we had never stepped foot in Germany. Nervously, we had studied on our new home to be. Learned about the graffiti, the nightlife, and the city's massive size (4 times the size of Paris!) . Upon arriving, we were relieved to find out how spread out the city is with green space on practically every street. But there are about 3.45 million people in Berlin. So where do they all go? Apartment buildings - sometimes big ugly block houses known as plattenbau.

The city of Paris has a population of over 2.2 million, with a metropolitan population of over 12 million. Damn! So different from the sprawling Berlin cityscape of apartment after apartment, we were just 30 min out of the center of the city and already rolling past single family houses. It reminded us a bit of London suburbs and had us missing being house dwellers.

4. No personal bubble. Though we bumped up this a few times (get it), Ian was made painfully aware of this phenomenon during our wait for Thunder Mountain Railroad in Disneyland. For about 65 minutes, a pair of slightly drunk, smoke-laden, middle-aged men cozied up to him from behind. Trying to talk to Ian was useless. He was too focused on the passive-aggressive American reaction of grinding teeth and muttering about murder under his breath.

5. Less graffiti than Berlin? Even with our expanded tour of the city from our first visit, there is so very much we didn't see. We've heard the suburbs is where the graffiti is and were surprised at the mostly immaculate city center. Even in the area we stayed, the Latin quarter (full of students), there was nary a hair out of place.

In Montmartre we finally spotted a little in the form of altered signs. Irreverent, fun, and totally mischievous. 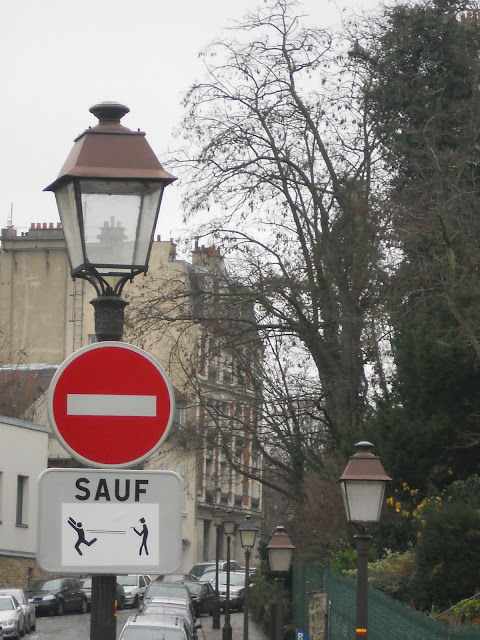 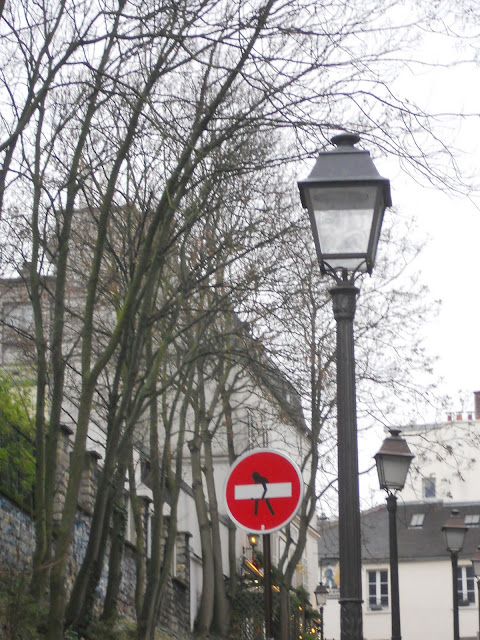 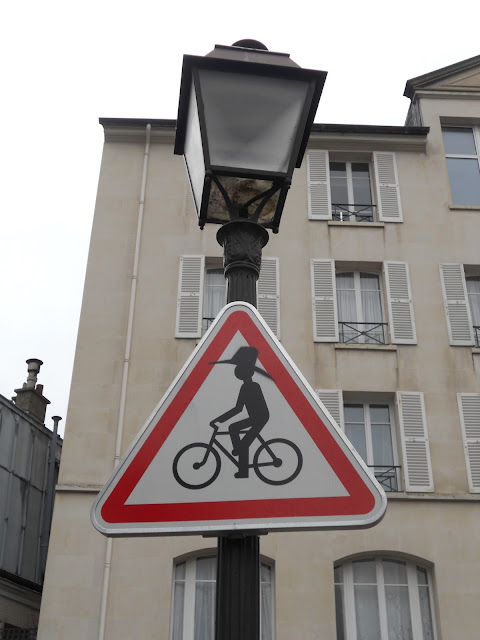 6. Government Regulates Baguette Price. If a baguette costs .45 cents it cost .45 cents everywhere in the city. For absolutely no reason at all, I love this.

7. You know more French than you think. Ian is a language genius. We arrive in a country and by the time we have left he is ordering tickets in that language and making little jokes with the ticket sellers. He is AMAZING. He is a one-man tour company and has helped guide me across much of Europe, and impressed our visiting friends and families with his know how.

I was prepared to lazily lean on him like usual, but was surprised how much French my dumb dumb mind has observed throughout the years. Was it tv/movies, prevalence of French food, or just American's general fascination with the French that had allowed these words to sneak in? No matter - I was delighted to find I didn't have as much trouble with menus and getting around as I would have thought.

8. Multicultural. E gads - Black people! As kids from small town Washington State and even Seattle, there are a limited amount of black people in our background. Not that we we are without friends of color, there just aren't a lot of them to choose from.

As waiters, we did have a favorite manager who is black, lesbian and from New York City. She stood out from the Seattle landscape and we adored her. We were all driving to an event and as she got in the car, James Brown's "The Boss" came on. She squealed,

"You little white kids DID NOT just put on JAMES BROWN!"

Somehow, we managed to move somewhere even whiter in moving to Berlin. Paris was a complete 180 as we saw people of every color. No wonder Paris is so cool.

9. Recycling & Trash bins. Germany has recycling covered. As a former recycle educator, I am continually impressed with the availability of recycle bins and programs that recycle goods. While Paris was far from terrible, it is hard to match the German excellence in this arena. And those crazy "trash cans" that are just bags on a hoop? We looked it up - these replace traditional concrete can holders after a bunch of bombs were put in them in 1995.

10. No need to Tip Big. I don't know if we will ever get used to just rounding up the bill as a tip. It is pretty much the same here in Berlin, but tipping 10% or less can seem so woefully inadequate.

However, Frommers says
"By law, all bills in cafes, bars and restaurants say service compris, which means the service charge is included. However, it is customary to leave 1€ or 2€ depending on the quality of the service. "


A few other miscellaneous tips from our trip:
Also check out our posts on Disneyland Paris and the Museums of Paris.
But for now, gratuitous shots of the Eiffel Tower and other Frenchie stuff. 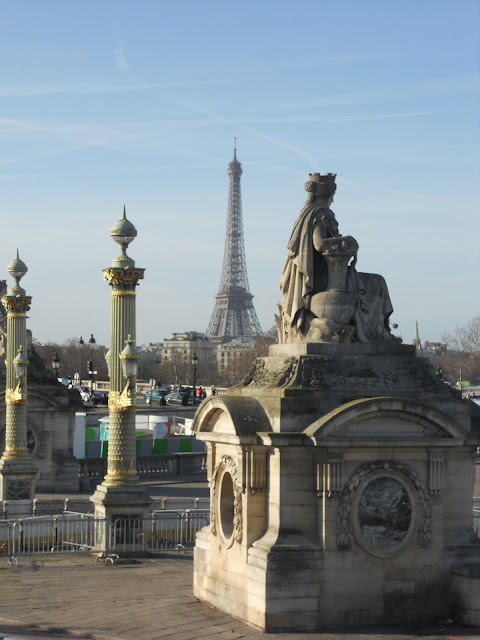 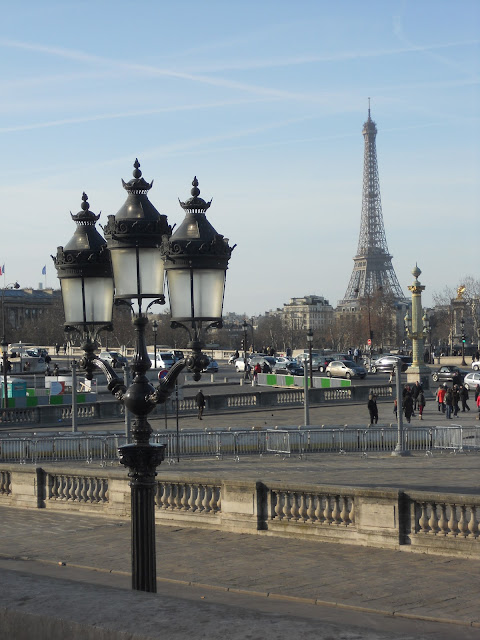 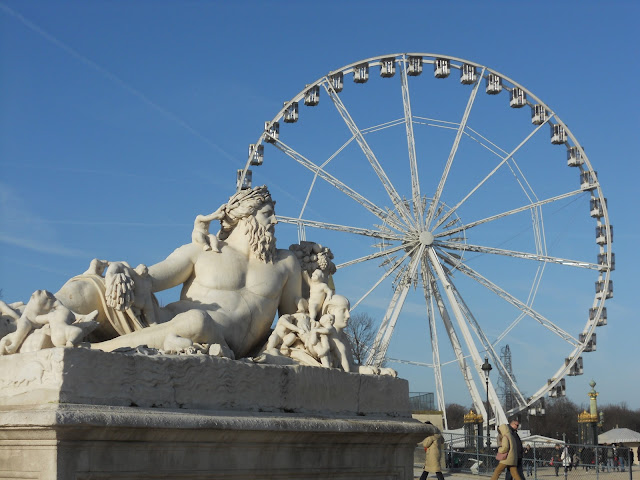 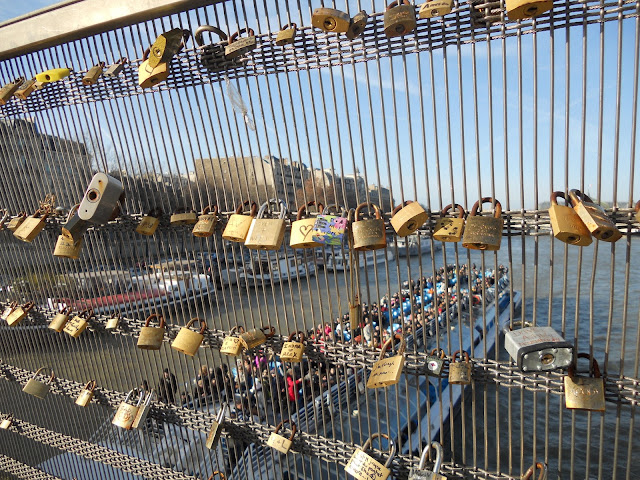 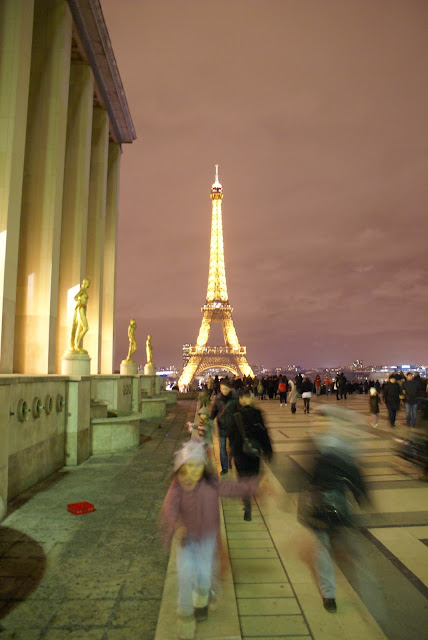 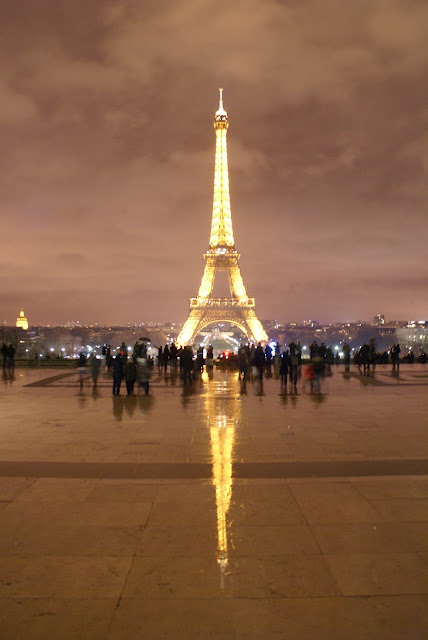 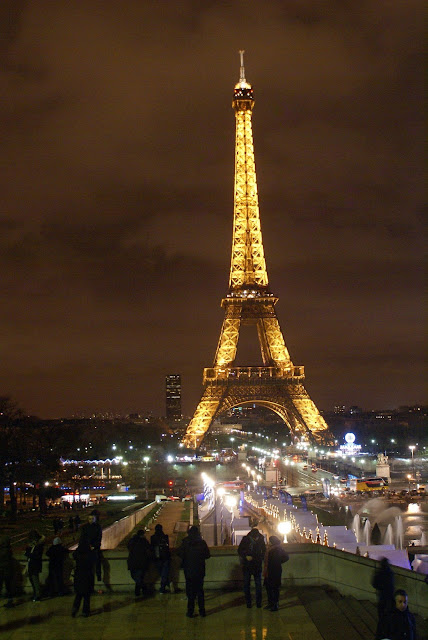 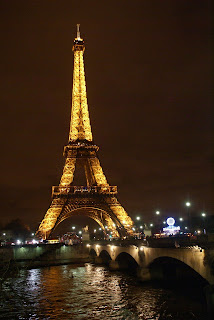 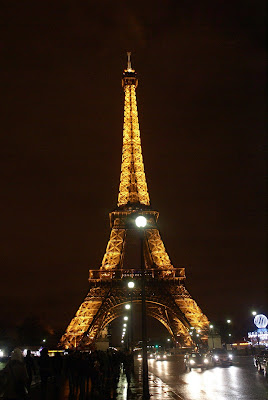 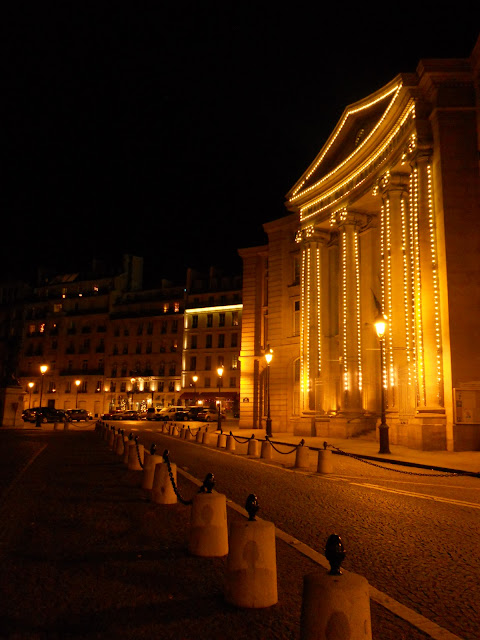 Planning your own trip to Paris? Here is how we planned:

Our Plan of Attack on Paris

If you are an absolute glutton and haven't got enough of Museums of Paris, the Tower or us,
Full Paris Album

nicole is the new black said...

i love your photos i have been to paris 5 times and still dont know the city that well. there is so much to explore!
I will try airbnb in toyko, i little nervous because the flat owners will also be in the flat. i am sure it will be fine!!

Merci! It was lovely.

I am sure you'll have a great time in the flat & in Tokyo. Can't wait to see your post.

Wonderful shots of Paris!
After 10 years in Germany, it's one of those cities I've still never made it to. My husband has been a few times on business and isn't so fond of it so we just never wind up getting over there. Maybe one day! I owe it to my DSLR to experience it. ;)

"maybe if they had taught their children to give up their seat, they would be sitting down now."> Yes, this is so true!

Re- butter sandwich: do you mean you DO NOT put butter in sandwiches? But it makes the bread nicer. The Parisian-sandwich is baguette with butter, ham and cheese...and sooooooooooo good.

The baguette price is fixed by law, yes, but also the size of the baguette (so filthy bakers don't cheat!): it must be 200-250g (controlled by DDCCRF or DGCCRF with 10 baguettes, and the average is the checked).

Thanks Tiffany! That is too funny you haven't been. Then again, you've been a bit busy with husband, kid, dog & homestead.

Touché Cyril - I need to brush up on my traditional French sandwich. But no, I still do NOT like. :)

Quite funny you were offended by butter on a sandwich- most everyone does this except Americans. Many would find mayo as awful as you find butter;)

Just a word on the map thing, you can get a small booklet of maps broken down by Arrondissment called Paris Pratique. You can get it at practically every newsstand, it costs five Euros, and will never fly up into your face on a windy day. You can borrow my copy any time.

I wouldn't say offended by the butter, just not into it. I'll stick with other delicious French foods...

Thanks for the note & generosity misterrios! There is not doubt we were being cheapos and should have just bought a F*$%ing map already.