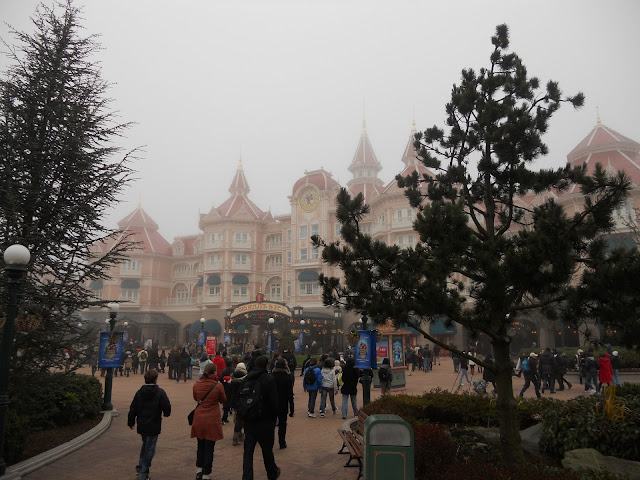 We had an epic time the last time we went to Disneyland in California. Both of us had been as kids (Ian went many times as his family is Disney obsessed) but our first trip together was during our 1 year anniversary (Married - yea!). We road tripped all the way to SoCal- visiting fam AND to visit the "Happiest Place on Earth". And we were deliriously happy. A week before Halloween, the place was decorated like never before and lines were almost non-existent. We rode every ride in the place in one day and rode some of our favorites back-to-back, gleefully getting off a ride only to run right back on.  Best. Disney. Trip. Ever!

We made a pact that we can't go back till we have kids. This is a selfish decision as there is no way we can top that experience, unless we change up our crew. (I heard Christmas is amazing in a whole new way once you have kids too). But as we planned our 2nd trip to Paris we just couldn't help ourselves - we wanted to cheat and go to Disneyland. We reasoned that it is different going to Disneyland in a different country, and we promised each other we would not be disappointed no matter what. 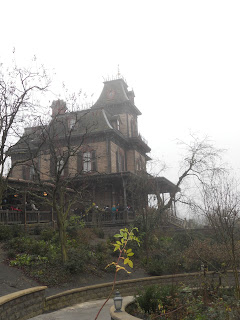 But the park was (of course) truly beautiful and we excitedly made our way to the closest ride - the Haunted Mansion. This is one of my favorites and SoCal's Halloween additions to the house's decor and show had me extra excited. It was a disappointment. Long lines led to a boringly similar ride to the USA with long lulls of slowly riding through dark spaces. Worriedly, we looked at each other.

Next we went to Big Thunder Railroad which was enticingly placed on an island in the middle of a lake. The ride looked gorgeous & we couldn't wait to get on. Unfortunately, the rest of the park couldn't wait either. The line for Fastpasses was so backed up we decided to just jump in line for the ride & hope for the best. 60 min later things were looking grim as the drunk, chain-smoking French men behind Ian had been ramming into his back for most of the wait and the old timey music and standing was making us question our sanity. BUT - the magic of Disney - we got on the ride and smiles (and screams) appeared as we roared down the rails. 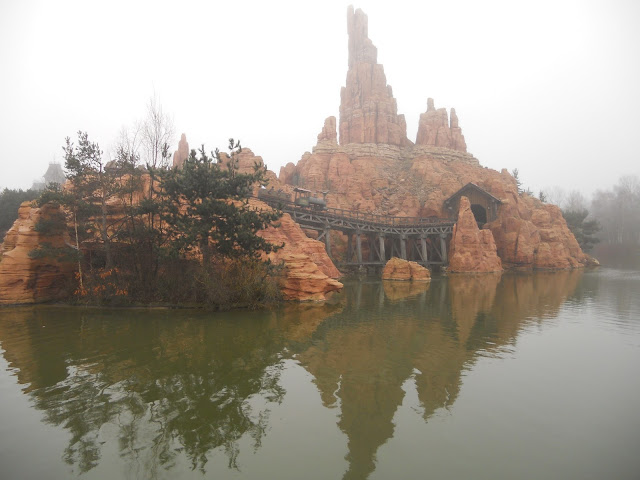 Only a few moments and the ride was over. It didn't matter. One good ride had swept away our worries & frustrations. We were ready to get down at Disney. 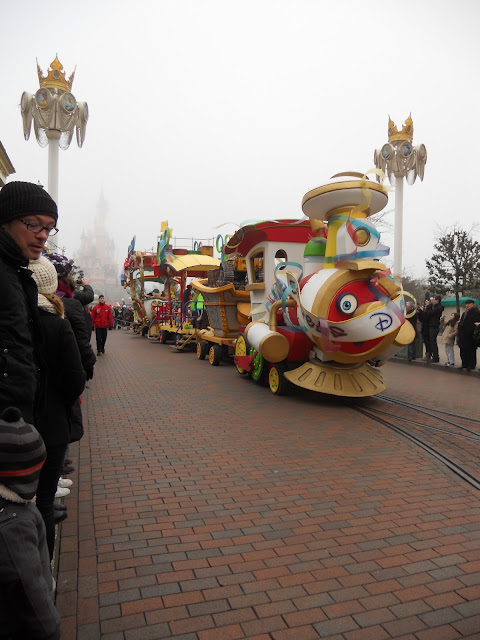 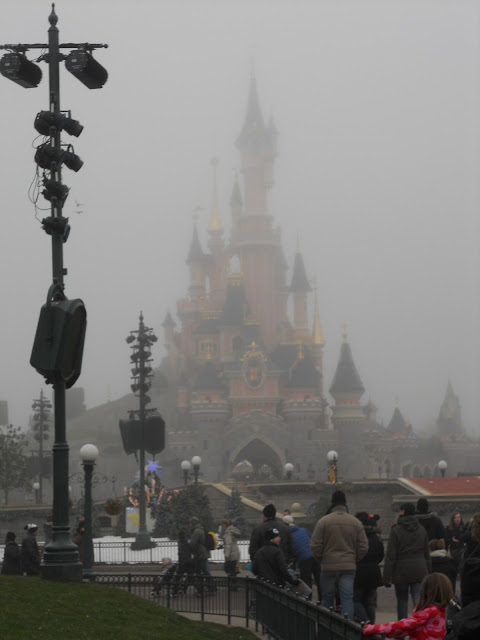 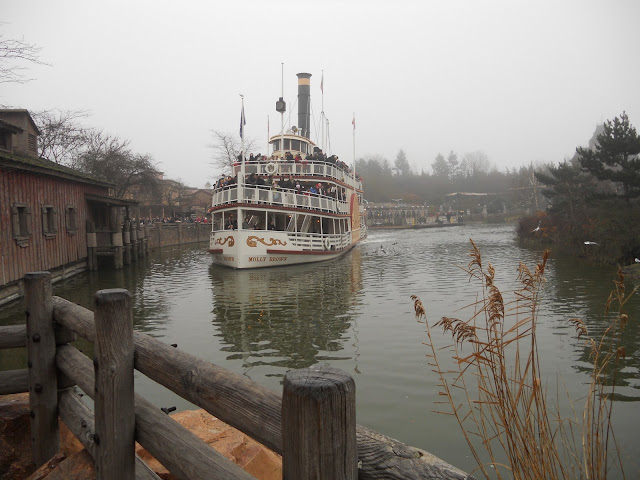 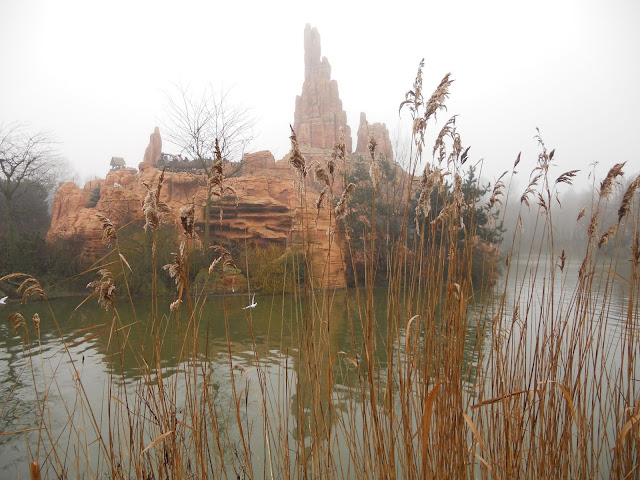 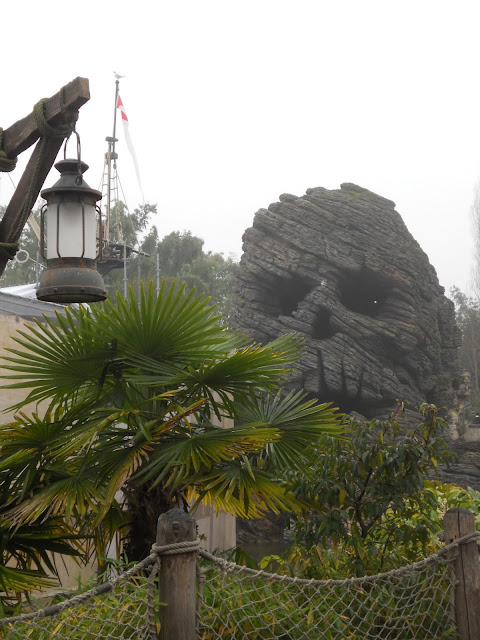 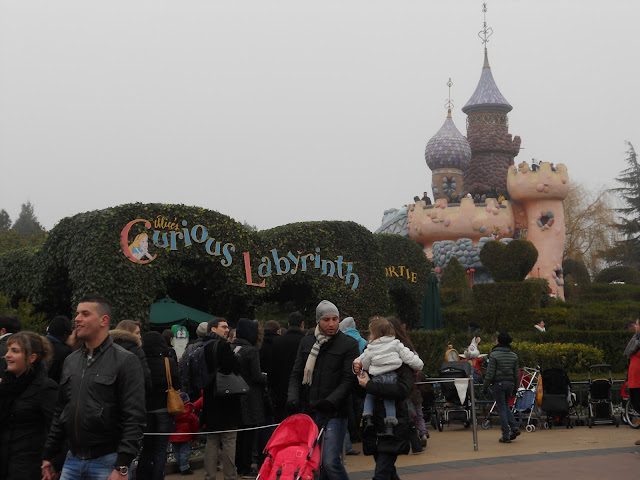 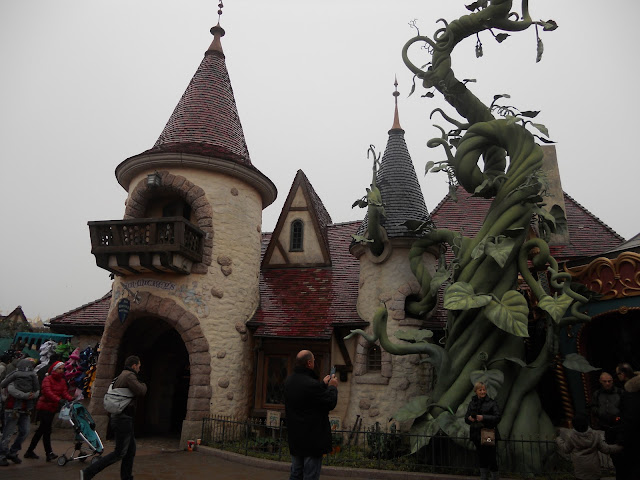 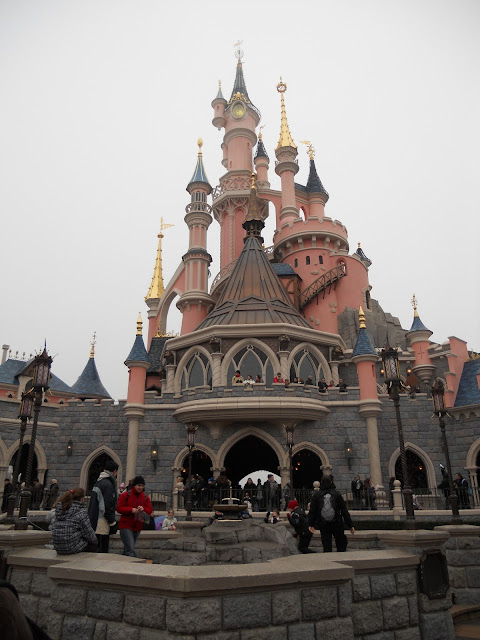 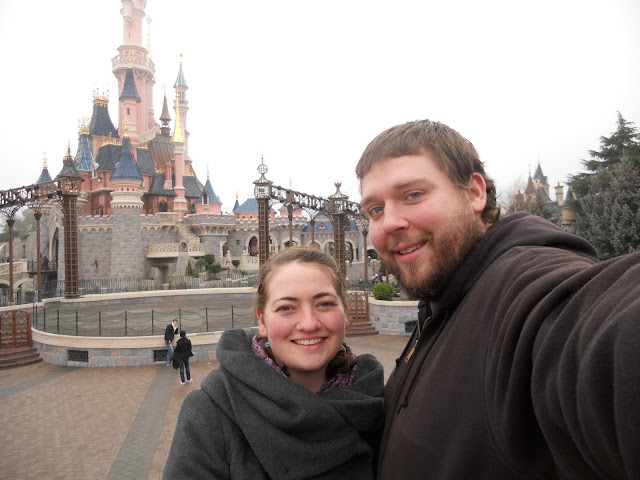 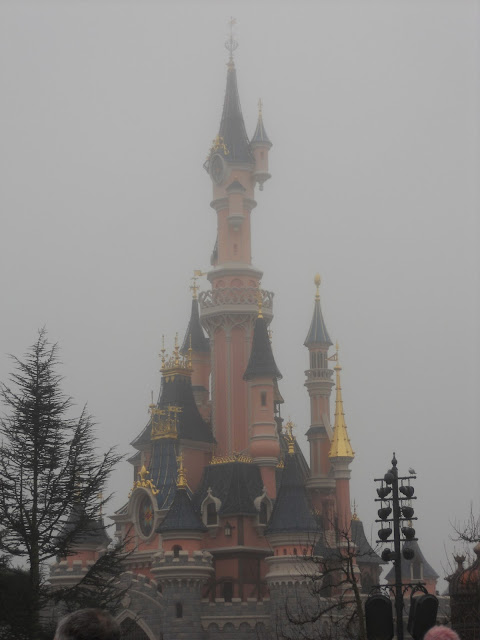 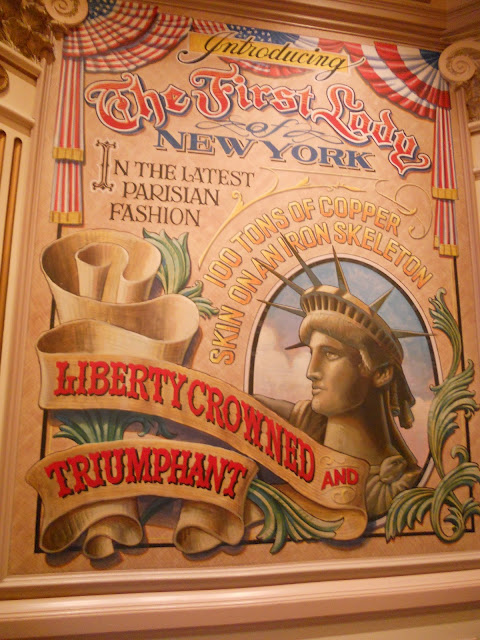 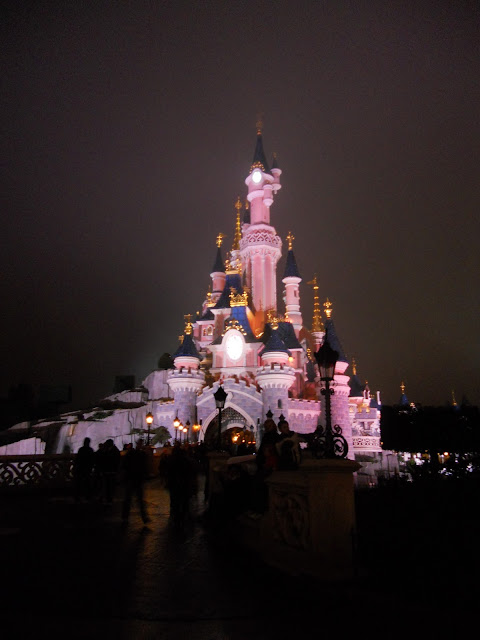 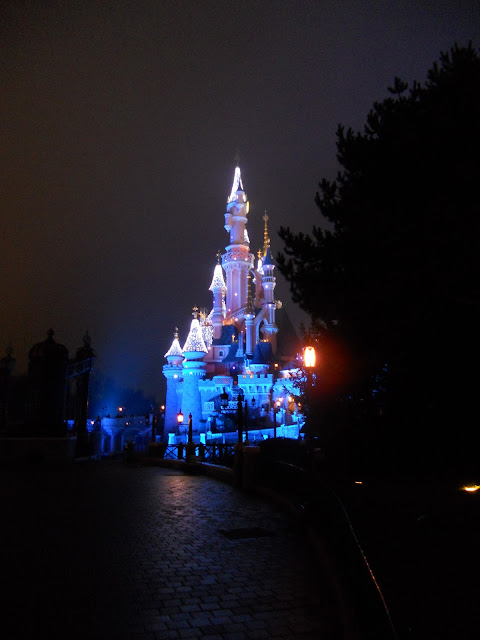 
Christmas decorations were magic & coming during the holidays (which extend from Nov - Jan) offers special shows and extra long hours. 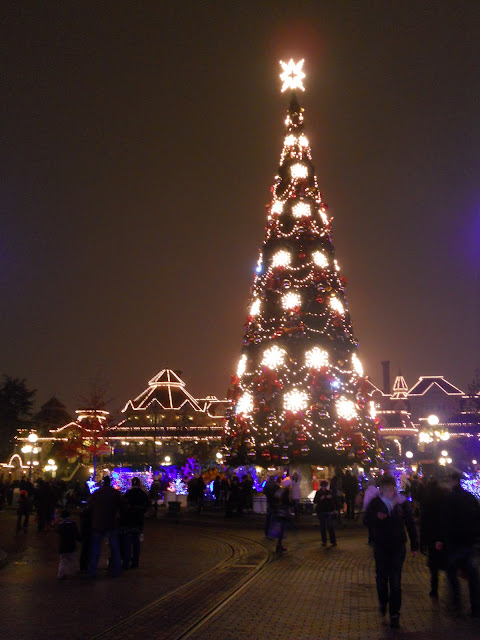 There are many different ways to get to, get in, and "do" Disneyland Paris - but this is what we did.

Official site: http://www.disneylandparis.com/
Admission: $80 USD (unfortunately not many discounts/coupons except for multi-day/food)
Badass free ap that let's you virtually explore the park: http://itunes.apple.com/gb/app/disneyland-paris/id396908589?mt=8
Tip: Don't despair if there are crowds! By 6pm things had cleared out astonishingly & we were able to ride some of the roller coasters multiple times.

We bought a week transport pass, Navigo Découverte, which I highly recommend. This was a  stress-reliever as we could go anywhere in the city with an easily scanned pass. It also offered huge savings at 33.40 euro for 6 zones (which includes the airport & disneyland). RER train tickets to the city from the airport and out to Disneyland were each 9 euros so this was a great deal for us. Only caveat to this pass is that you must buy a card and pay a one-time fee (€5) and have a stamp-sized photo. For us - great savings and wonderful ease of use.

I am confused about if you can bring food into the park or not. We planned on getting to a grocery store for snacks the night before, but didn't get into the city til 7pm the day after Christmas - everything was closed.We bought a bottled water & breakfast outside of the park which was a huge save. There was a bag check, but my unopened water made it through easily.


Midday we were crashing & needed to eat. Typical to France, there were items a la carte and many meal options. This included 6 euro hot dog stands to fish & chips at a sit-down for 12-14 euro to burger meals in a covered film area for 10-12. I wasn't loving our options. But the handy map pointed us to Main Street where we found a filling, tasty, and cost effective option of croque monsieur & pizza for 6 euros each. This was at the Market House Deli and while not "cheap", the price was far from outrageous for Paris and they really tasted good & kept us going the rest of the day. Oh the agony of being from such an inexpensive place like Berlin! (Stop my complaining, right?)

With your receipt comes a free coffee which cleverly sucked us into buying a 3.50 euro muffin. Well played Disney. It was well worth it for us as we stayed at the park til close at 10pm and we slowly nibbled it down, half-jokingly calling it a "marriage saving muffin" (I tend to get a wee bit bitchy when hungry).

There are many, many options. There are almost more food stands than attractions. Plan accordingly.

We aren't big shoppers when tourist'n, but wanted to get some postcards and little things for the parents as they are all some degree of Disney fans. We were surprised to find many cool little things like glasses & ornaments under 5 euro. Total score, and yes parents, we have something for you.


Until next time Disney

Maybe this will actually take us to Florida sometime....

LOVE IT! ...Steven buys me marriage-savers often, as I go from kindof hungry to raging bitch in as little as 20 minutes (sorry honey). I personally vote for breakin' the rules and visiting us on the road trip this time. :)

Wow, I can't believe those queues even at this time of year! I think the best way to see Disneyland is to make the most of your child-free present and go when the schools are in! We went to Disneyland Paris in May and it wasn't too bad for queues. It's great though. It was my first time and we all thoroughly loved it. Kind of wish we'd driven there though and seen a bit more of Germany & France on the way.

That would be the coolest abandoned site EVER! Maybe this economic crisis isn't such a bad thing after all...

Thanks y'all! 'Twas a good holly jolly time.

@Emily - how is "marriage-savers" not a common use term?

@Fiona Good advice about the kiddos. Did you do a blog post about your trip? I'll have to go look.

@Irish Berliner - YES! This would be an epic abandoned landscape

And Kelly, so good to hear from you although we did feel quite guilty enjoying without you. Your comment put a smile on Ian's face

Oh my gosh thank you for all the info! I am dying to go there as I've never been to a Disney World and I feel like a piece of my childhood is missing!

But of course Alex! It really was magic & I would recommend.

wow! I so love Disney lights especially at night! It looks so magical. You obviously had some fun huh! Do you have ideas where to find the best Disney Dining?