The Holy Trinity of Mexican Food in Berlin

One of the greatest tragedies in German cooking is the absence of Mexican food.We practically live on taco trucks, hole-in-the-wall taquerís, and homemade tex-mex in Seattle. We were aghast to find poor man's Spanish food standing in for our beloved Mexican in Berlin when we arrived in 2007. Toto - we're not in Kansas anymore. 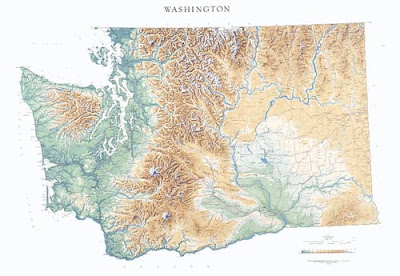 While it may seem strange for a couple of Seattleites to be talking up Mexican food, Ian has a mysterious past. He is actually from Eastern Washington. GASPPPPPPP!!! Oh - you have no idea why that's a big deal? Let me explain a little something about Washington state....

Most people only know about glorious Seattle, but Washington is quite large (18th largest in fact). Do you see that brown thing in the center? That's a big ass mountain range, the Cascades, and it separates the state.

A drive over the mountains can reveal a disturbing increase in anti-abortion propaganda, bail bonds offices, and light racism. Luckily, it also hosts an agricultural community that brought with it farm workers- namely Mexicans. And oh man! those Mexicans can cook. Ian is legitimately proud of Yakima's little Mexico and I have an ever deepening love for the cuisine every time we visit. 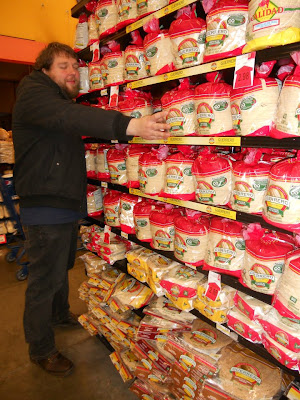 Anyhoo - back to Berlin. I've talked about the lack of Mexican food all over the world and American's yearning for it in posts like "American Snacks Gone Global" and it is a a common answer to "What do you miss most? in our Expat interviews.

Seeing the need, many have tried to right this wrong in otherwise amazing city. There has been rapid expansion of the Mexican restaurant scene in Berlin. Most have missed - whether it be tortillas that immediately fall apart, pickles in the salsa, or food assembled so hopelessly it is impossible to eat. But there are a few places making a difference.

Three restaurants (that I believe are owned by the same people) are elevating the fine art of Mexican food. There are still stumbles, but our favorite hits closer to the food of our dreams than we have dared to hope before. The restaurants.... 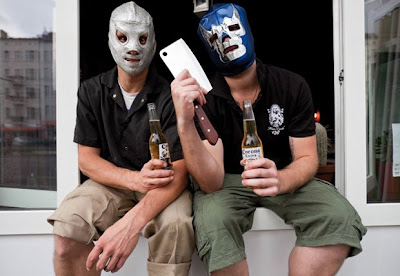 This spot is like a permanent taco truck. The place is tiny and offers take-out options, making it close to the atmosphere of places we loved back home. The portions are ok with lower prices than its sister restaurants.

The problem is that the quality is also much lower and with additional charges for condiments like the habanero salsa. This makes the price settle close to that of the sit-down restaurants (still under 10 euro). The biggest sin is that my Huevos rancheros was served with the tortillas beneath everything else - only to be discovered with fork and knife - a soggy mess.

Verdict - I wouldn't bother with this one again unless I was in the area and wanted something to go. At least the artwork and attitude are right.

The opposite end of the spectrum, Maria Peligro is the largest space with a slightly more upscale, although still Berlin ramshackle, vibe. We came here for Cinco de Mayo and there was a host of specials on the menu for drinking & dining and plenty of intimate seats to choose from in the Dia de los Muertos decor.

That changed quickly as the place filled up and the Coronas and 4 euro margaritas flowed (happy hour price). The carne asada burrito was a delight, but at 9 euros for the burrito and a smear of gaucomole it's price was a little absurd. The plate screamed "Some beans! Rice please!" My dish of chilaquiles was surprisingly less well crafted and more expensive than the preferred third restaurant.

Verdict - A good place to meet a group and have a meal, especially during happy hour. But for the best food of the three, party on to the next place.

* 2013 Update: We just this one is closed which is too bad,but as it was the Goldilocks and the three Bears in the middle it is no terrible loss. Onto my favorite Mexican restaurant...

We've found our Mexican food home. We stumbled in on a cold evening and found a few tables packed into a tiny space on trendy Oranienstrasse. We worried about finding a place, but were able to take a seat at the bar and order 1 euro tacos for taco Tuesdays with a 4 euro margarita. Things were looking good. Additional orders of a salad for 3.50, a burrito for 5, and my first run at chilaquiles were surprisingly delightful. Service is also an unexpected highpoint with the hurried, but helpful, staff getting food out and people sat in a timely order.

Verdict - We're in love. Like a puppy dog crush, that may fade with regular visits...but for now we are charmed.  Note that it is often overrun, but if you can wait it's worth it.


Tip: If you like things hot! hot! hot! like us - ask for the habenero salsa. It's no additional charge at Maria Peligro & Santa Maria and packs a delightful punch to the tongue.

If you are still dreaming of Mexican food without relief, here is a little inspiration. While hardly traditional, these fusion meals keep us going til our next taco truck.

We substitute Indian chili powder for Mexican, use feta as a substitute for queso fresco, koriander (or coriander in English) is an ok stand-in for cumin  and Turkish stores sell similar goods to tortillas. We also found cornmeal at Spanish & African shops and are experimenting making corn tortillas and seriously enjoying cornbread again.

Have a recipe you like or recommendation? Do tell....AND if you're gonna get really crazy, please start a taco truck in Berlin! Here is a how to: http://www.tacosberlin.com/how-to

We went on a hunt for Mexican Ingredients in Berlin and this is what we found...

You HAVE to try this place: http://www.spottedbylocals.com/berlin/ta-cabron-taqueria/
The food's authentic and fantastically delicious but the portions are a little small - but that could be because the food's so goddamn good you just can't get enough.
Agree wholeheartedly with you on Maria Bonita. Prices ridiculous and the food's not that great - not after you've eaten at Ta’ Cabrón!
Jesus, I'm gettin hungry just writin about it.

Good writing - several times I had to laugh out loud at your outrage about the cost, or inadequacy of the Mexican restaurants in Berlin. It does give us good reason to send tortillas, refried beans, chile powder, enchilada sauce, etc. to you as we can. In fact, is Kyle going to be bringing any Mexican food with him when he comes from Texas? Also I just found out from the Pioneer Woman that you can stretch all enchilada sauce by adding chicken broth/stock to it - this was part of an excellent beef enchilada recipe I made last week. BTW - Your tortilla pie looked killer!!

On another note - I saw a post on your blog that is no longer there - - are there gremlins at work?

Hey Irish Berliner - We tried Ta’ Cabrón once and were...unimpressed. It's gotten a lot of good press, so we need to try again. I remember they did offer the authenticate taquería feel with double tortillas. With your good word - we will venture through their doors again.

Thanks for the care packages of mexi food mum! Luckily, Mexican food is not so hard to make from scratch. We've gotten pretty good a refried beans, enchilada sauce, etc. Next thing to conquer - making our own tortillas.

It's great to get some Mexican recommendations. I've got to have Mexican today now so I'm off to Santa Maria for lunch!

Thank you!! I had all but given up on finding Mexican Food in Berlin! I can't wait to go check them out.

Mexican food is definitely one of the things my wife misses moving here. We are making do though. The tortillas in the grocery store are edible. We have a habenero plant and cilantro growing on the balcony and she is perfecting a salsa recipe.

Although there are several "mexican" places in Freiburg, the place that we like the best is el Bolero, which is Cuban/General South/Central American.

We will definitely have to try these when we make it up to Berlin.

Glad andberlin found the way there but sorry I forgot to include the tip about habanero salsa heat!

Let me know if you find anywhere you like Kate.

Andrew- I'll have to check out el bolero if I'm in Freiburg. In the meantime, I'll be jealous of your habanero plant.

Thank you for the mexican recommendations. I can totally relate about the limited Mexican options in Berlin! Aaaaah! Even the chips and salsa sold in the supermarket taste a bit weird!

@The Diplomatic Wife - hopefully these picks treat you well. We continue to be pleased with Santa Maria but are always looking around for new favs. And agreed! about the chips and salsa. The chips have an odd after-taste of oil and everything called salsa here is just too sweet. Try Santa Maria & Dolores's chips - they are the closest I've found.